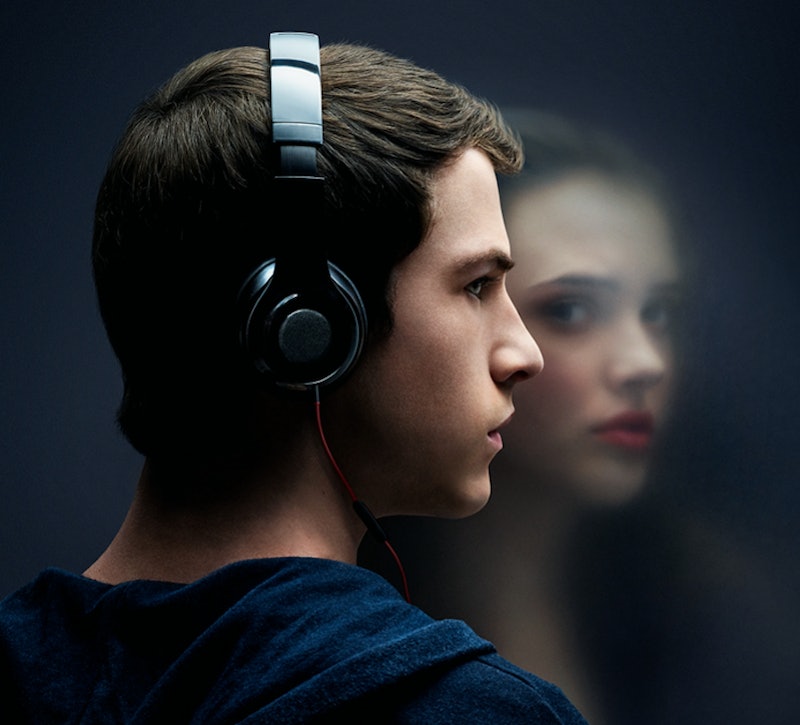 Whether you're in the market for a new TV obsession or desperately trying to avoid becoming addicted to anything else on the small screen, I'm psyched and/or deeply sorry to tell you that it's unavoidable. When Netflix's 13 Reasons Why premieres it will immediately get you hooked, and there's little to nothing that you can do about that. The best course of action is just to make peace with that fact, so you can move on to getting ready for the show's release, which Bustle and Romper can exclusively reveal is on March 31, 2017.

For a start, it boasts a compelling premise: it follows teenager Clay Jensen, who finds a mysterious box with his name on it lying on his porch. Inside, he discovers cassette tapes recorded by Hannah Baker — his classmate and crush — who tragically committed suicide two weeks earlier. On tape, Hannah explains that there are 13 reasons why she decided to end her life. He'll have to listen to the tapes if he wants to find out if he's one of the reasons.

If the story sounds familiar, that's because it's based on the best-selling book of the same name by Jay Asher, which has sold over 2 million copies and topped the New York Times' bestseller list. This bodes well for the series; even before we get to the nitty-gritty of who wrote what for the show, to sell over 2 million copies, the book clearly had a strong narrative arc. In the video below, you can get a glimpse at how that story is being adapted.

The people behind the show look just as impressive as the cast and the book's sales. It's been penned by Brian Yorkey, who has won a Pulitzer Prize and a Tony Award for his work on the musical Next to Normal. Since Next to Normal sounds like it has somewhat similar themes to 13 Reasons Why (a focus on mental health and drama in suburbia), hopefully, the writing will be every bit as tight in the series as in the book.

And the talent doesn't stop there. Guess who one of the executive producers is? None other than Selena Gomez, she of pop music fame. This is a little unexpected but not so unexpected, since Gomez has been getting increasingly involved in production and even worked as a producer on the 2016 TV series Rising.

Finally, if you needed one more reason: is it me, or is there more than a whiff of Pretty Little Liars about this? You've got the voice from beyond the grave, the gossip, the secrets, the endless mystery that high school students have to unravel. Given that Pretty Little Liars is ending this year, this is excellent timing on Netflix's part. If you love sleuthing and sinister undertones, it looks like this could be a comfortable replacement for the Freeform series.

So get ready for a whole new world of high school intrigue and high stakes drama. If it's half as powerful as the book, I, for one, can't wait.

More like this
'The Last Of Us' Episode 4 Put Twitter Into An Emotional Spiral
By Alyssa Lapid
Olivia Colman Stars In First-Look Trailer For BBC's 'Great Expectations'
By Sabah Hussain and Sam Ramsden
'Wednesday' Star Emma Myers Thinks A Wenclair Storyline Is “Possible” In Season 2
By Alyssa Lapid
Netflix Shut Down 'Bridgerton' S3 Rumours About A “Very Dark” Storyline
By Bustle
Get Even More From Bustle — Sign Up For The Newsletter
From hair trends to relationship advice, our daily newsletter has everything you need to sound like a person who’s on TikTok, even if you aren’t.