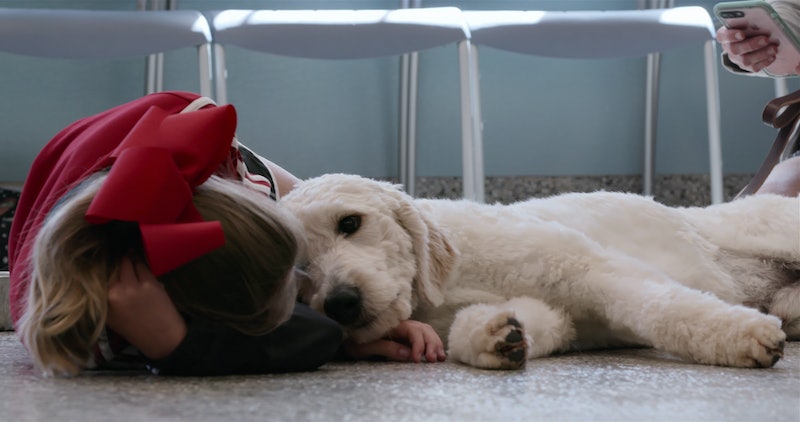 If you've been feeling the need for a good cry, you should definitely check out Dogs on Netflix, streaming now. The docuseries follows six stories about different puppers, exploring the "emotional bonds that form between dogs and their caregivers, no matter the circumstances." When I saw the description, I was worried that a dog (or six!) was going to die and rip my heart out. But that's not what the series is about or interested in doing. Netflix's Dogs isn't sad, but it is emotional to watch in the best way possible, because it documents the goodness of humanity in the face of struggle and how pups help make every part of life better.

The stories hop all over the globe. You'll meet a young girl and her dedicated service dog in America. You'll visit Italy and meet Ice, a fisherman's dog who's getting older but is no less willing to take to the water with his owner. In Germany you'll meet a Syrian refugee who will stop at nothing to get his dog back. You'll find yourself rooting for a Japanese dog groomer whose mission is to bring out every dog's individual cuteness through their haircut.

You'll also learn about the shelter in Costa Rica that's taken in every street dog they can to their farm so the dogs can live their lives out running around and being free. And in New York you'll learn about a rescue center that's giving dogs their second chance.

Each tale is inspiring in its own way, though it's definitely an emotional roller coaster of a series. Your heart breaks for the dogs in Costa Rica whose owners abandon them seemingly without care. Panic sets in when some of the shelter dogs are attacked by a wild animal and you aren't sure if they'll be OK. In a heart-stopping moment, Ice's owner calls for him and he doesn't show up for a minute — is he dead? No. None of these dogs die, because that's not what this series is about.

Yes, Dogs knows what it's doing, and it will tug on your heartstrings — just the theme song made me cry a couple of episodes in — but ultimately all your worries will be for naught when you see a dog find her forever home, or play in the snow, or give sloppy kisses to her loving owner.

Your heart will soar when you see a dog who was previously hurt in a car accident bound away with his new family, his injured leg no longer holding him back. You'll shed a tear of joy when Ice's owner states his intention to get a new boat with a better shelter for his aging pup who just wants to be by his side while he fishes.

As Kenichi, the dog groomer from Episode 4, astutely notes, "Dogs never betray your trust," and this series won't, either. Just watch with a pile of tissues and a puppy of your own if you can. You'll need the snuggles while you sniffle.