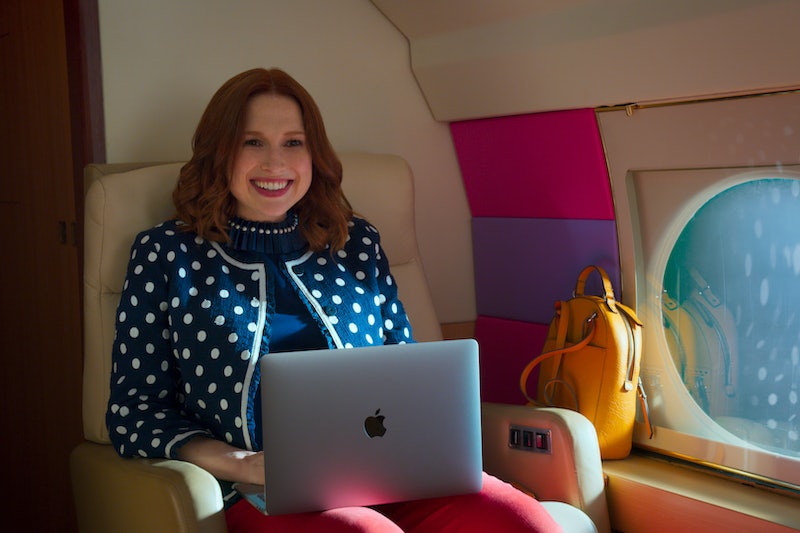 You just can't keep an unbreakable woman down. A teaser for Netflix's Kimmy Vs. The Reverend has officially arrived and delivers some of that classic Kimmy Schmidt comedy we could all use an extra dose of right about now. The interactive special was first announced back in May 2019, and will allow viewers to choose the outcomes of each characters' individual storylines. Just think of it like a much less stressful version of that Black Mirror movie.

The special is slated to make its Netflix debut on Tuesday, May 12, and will follow Kimmy on events leading up to the most important day of her life: her wedding! The teaser doesn't provide a ton of information in regards to plot, but according to the press release provided to Bustle, the story will center around Kimmy and the Reverend (hence the title) as her former captor, and husband, attempts to thwart her wedding day plans. But does he succeed in carrying out whatever evil mission he's concocted or will Kimmy find a way to make it down the aisle on time? That's up to you to decide because every choice you make for the character could ultimately impact her happily ever after — or lack thereof.

Along with Ellie Kemper, who stars as the quirky and lovable Kimmy, the special will also see the return of several fan favorites, including Tituss Burgess, Jane Krakow­ski, Carol Kane, and, of course, Jon Hamm as the Reverend himself. For years, Kimmy has attempted to overcome the 15 years the Reverend stole away from her during her time as his captive in a bunker, but now Kimmy will finally be given the chance to face him head-on and force him to take responsibility for his crimes.

“Kimmy always wants to right a wrong, and this is her final act in doing that,” Kemper told Entertainment Weekly about the upcoming special. “From the start she was always trying to overcome what she had been through, but now she’s lashing out. She’s angry — not only at him, but in the way many women in the #MeToo era have been for a long time. It felt super cathartic.”

And with catharsis comes the ability to move on — and maybe even find a little romance along the way. That's where Daniel Radcliffe's character, Prince Frederick Windsor, will come into play. He's described by EW as being a young royal, who just so happens to be 12th in line to the British throne. “That sounds far away but is actually pretty f*cking close; I looked it up,” Radcliffe told the outlet. “Frederick’s had a very sheltered life so he’s rather oblivious, but a very good-hearted human.”

Sounds like he and Kimmy could be a match made in quirky heaven. He even claims to be able to see and hear Kimmy's talking backpack, Jan. "He absolutely loves Kimmy, and I hope people will be happy that she gets a prince — well, a prince with caveats," the Harry Potter star added. It seems he really was the chosen one after all.