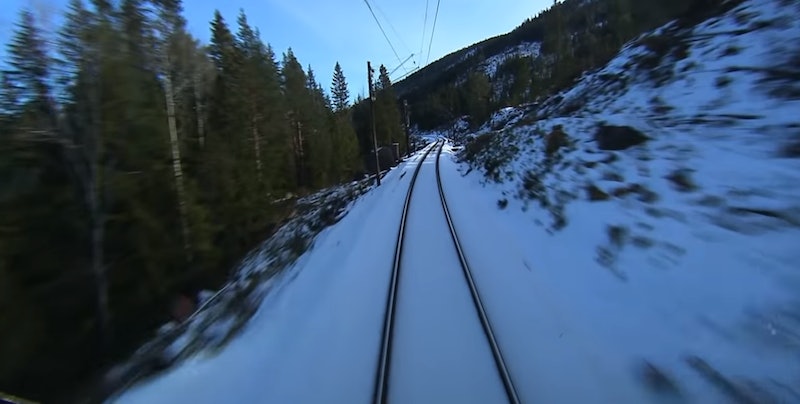 When the hit Norwegian specials known as Slow TV leave Netflix on Aug. 5, the void will definitely be felt by viewers who have come to love the relaxing programming. According to CBS, the soothing TV genre originated in Norway, and it's known for showing viewers things like train rides, cruises, and crackling fires in real time. Sadly, Netflix is removing its library of Slow TV next month, but fans still have time to watch gems like National Knitting Night before the 11 programs leave the streamer.

Per Reality Blurred, there are currently 50 hours and 41 minutes of Slow TV on Netflix. The programs range from a full train ride from Bergen to Oslo to seven hours of salmon fishing. The genre isn't for everyone, but the soothing nature of watching the hills roll by outside of a train window or the easy repetition of a practiced knitter can be calming and provide the perfect background noise for people who want a break from action-packed, plot heavy shows. The goal of Slow TV is to simply be in the moment, even if that moment is a mundane one. And that's exactly why losing the beautiful train rides and hypnotic videos of cozy fires is so frustrating.

Thankfully, Netflix isn't the only place for viewers to watch Slow TV. Fans of the genre can turn to Pluto TV and YouTube to keep the slow joy of TV that moves at its own pace in their lives after the programs leaves the streaming giant in early August.

YouTube features some of the Norweigen specials in full, and a few experiments from Slow TV fans who are adding to the genre by filming their own journeys for your viewing pleasure. However, the best Netflix alternative for fans is hands down Pluto TV. The free app streams a number of TV channels, including one devoted entirely to Slow TV. The only downside is that the channel does include commercial breaks, but despite the interruptions, having free, 24/7 on demand access to the most relaxing programs around is too good to pass up.

In 2017, CBS News interviewed the creators of Slow TV, Rune Moklebust and Thomas Hellum, about why the programming is so appealing. The duo readily admit that their shows can be boring at times, but that's all part of their charm. "It's important that it's an unbroken timeline, that you don't take away anything," said Hellum to CBS. "It's all the boring stuff in there, all the exciting things in there, so you as a viewer has to find out what's boring and what's interesting." That mix of natural beauty and unabashed monotony is still just as big of a draw now as it was when the genre first took off.

There's still time to watch some of the best Slow TV on Netflix before it leaves the streaming giant — Train Ride Bergen to Oslo is a good place to start for beginners — just don't be surprised when you find yourself hooked on the captivating slowness of the genre. Thankfully, even though Netflix won't be serving up these Norweigen favorites for much longer, viewers can still find plenty of Slow TV goodness to elsewhere on the internet.

More like this
Here’s Everything Coming To & Leaving Netflix In August
By Jake Viswanath
Does 'Locke & Key’s Ending Mean There Could Be A Season 4?
By Sophia Moore
Netflix Just Rebooted A Classic ‘90s High School Drama
By Maxine Harrison
'The Sandman’s Ending Is A Departure From Neil Gaiman’s Comic Book Series
By Kadin Burnett
Get Even More From Bustle — Sign Up For The Newsletter