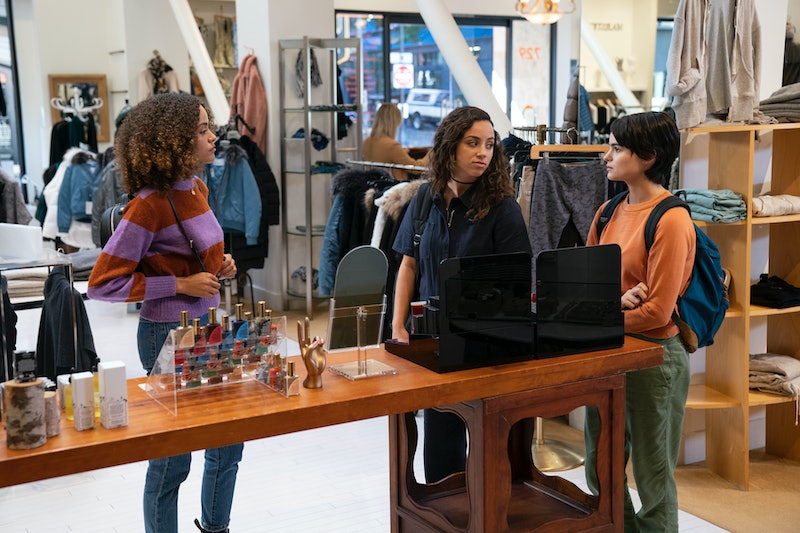 Trinkets arrives on Netflix this Friday, and it may be your new favorite YA drama. The series follows three very dissimilar high school girls who forge an unlikely friendship after winding up in the same Shoplifters Anonymous group. But while it sounds like a realistic enough plot that it could've been mined from real-life experiences, Trinkets isn't based on true story. It was adapted from Kirsten Smith's 2013 novel of the same name, and as the author revealed in an interview with The Script Joint, it almost went in a very different direction:

So what could have been the TV version of Ocean's 8 instead became a modern, female-focused Breakfast Club, which makes total sense if you know Smith's past work. Long before Trinkets, she established herself as a prominent rom-com/coming-of-age film writer. Even if you didn't immediately recognize her name, the odds are pretty good that you've seen one of her iconic movies.

This is truly a defining rom-com that catapulted Julia Stiles to leading lady status and solidified the late Heath Ledger as a bona fide heartthrob.

Elle Woods helped to inspire a whole generation of women to embrace the idea that femininity doesn't make you any less smart or badass. Smith is also credited on Legally Blonde 3, which is in pre-production.

This Anne Hathaway-starring fairy tale was absolutely charming, and we don't talk enough about the fact that it closes out with this delightful musical number.

Amanda Bynes in drag! A young Channing Tatum! This film truly has everything.

So, yeah, we're in good hands with Smith's material. As far as how Trinkets stacks up to her past work, Smith told Iconuu mag that she "feel[s] like the characters are a bit more vulnerable and struggling with self-esteem," noting that because it started as a book, she was able to approach it differently than her movies. "Writing novels is a little more interior than screenplays, so you can dig into the insecurity and uncertainty of character's psychology a bit more," she said.

Trinkets includes a number of other writers besides Smith, but she's credited as an executive producer as well, so her fingerprints are still all over the show. It may not be based on a true story, but it will probably feel like one: Smith has a clear knack for writing authentic and captivating women, and if you've loved any of her previous movies, you'll want to add Trinkets to your watchlist ASAP.