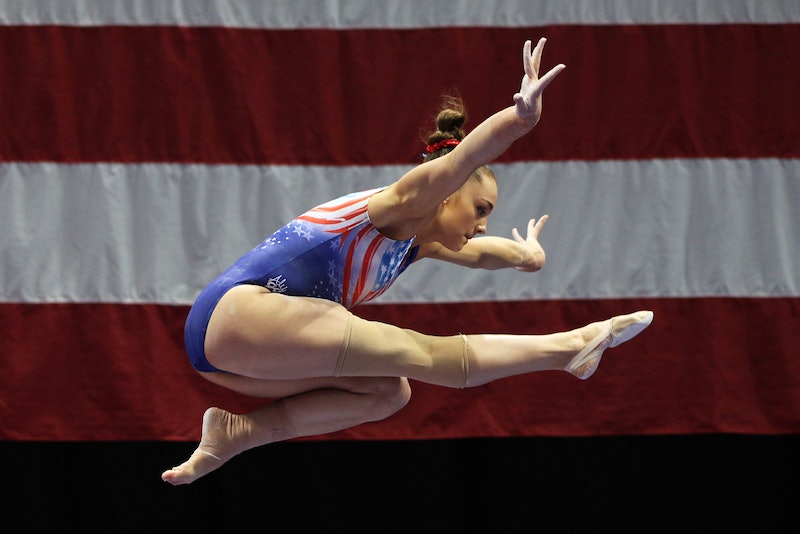 You're probably familiar with the case of Dr. Larry Nassar. The former doctor for USA Gymnastics has been accused of sexual abuse by over 250 young women, according to TIME. Those women include Olympians like Aly Raisman, Gabby Douglas, Simone Biles, and McKayla Maroney who have all come forward to tell their stories of abuse at the hands of Nassar, who is now serving anywhere from 60 to 175 years in jail. While this story has been extensively reported — and a number of other docs have covered Nassar's abuse — a new documentary from Netflix, Athlete A, digs deeper, hoping to expose a broader system of abuse and cover-up within USA Gymnastics (USAG) itself.

Athlete A follows a story of the investigative reporters, gymnasts, parents, and former Olympians who came together not only to put Nassar in jail, but to expose an entire system of corruption at the hands of USA Gymnastics. Specifically, the film focuses on the reporters at The Indianapolis Star who first broke the story of abuse claims against Nassar, and the stories of gymnasts like Rachel Denhollander, who was the first to publicly accuse Nassar of sexual abuse, and Maggie Nichols, who in court documents was referred to as "Athlete A."

To explore the power abuses in gymnastics far beyond Nassar, the film's directors Bonni Cohen and Jon Shenk explore accusations of abuse against numerous other coaches, address the Soviet-era-inspired tactics of USAG coaches Bela and Martha Karolyi, and questioning if minors should be allowed to compete in the Olympics at all.

And it's that examination of the how minors are treated within the USAG that sets the film apart from prior explorations of the ways the USAG has failed its athletes. As former elite gymnast and author of Chalked Up Jennifer Sey says in the film, "In other sports the athletes are adults. They can reasonably make choices about what they want." There's a notion, she says, that "we would sacrifice our young to win."

Athlete A raises a lot of questions about the USAG's practices. Such as, why were parents barred from the Karolyi Ranch, where the athletes trained for the Olympics? What kind of communication were the gymnasts allowed while at the ranch? Why were teenage girls permitted to be examined by Nassar without adult supervision, let alone be in a room alone with him at all?

The USAG has undergone a reckoning ever since Nichols and Denhollander first accused Nassar of sexual abuse. But as Athlete A highlights, this is just the beginning. In order to protect its young athletes, the organization needs to reexamine its practices from the inside out.