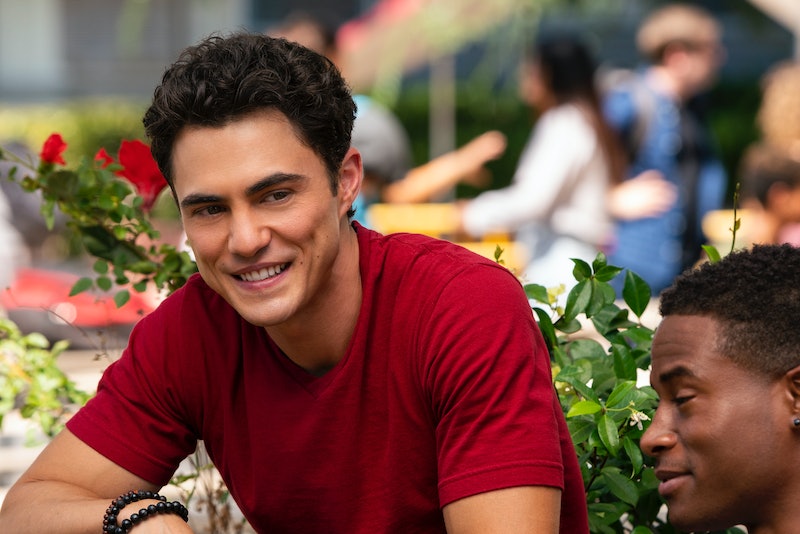 LARA SOLANKI/NETFLIX
By Olivia Truffaut-Wong
May 15, 2020

Mindy Kaling's new sitcom Never Have I Ever has blessed us all with a new Netflix heartthrob. Paxton Hall-Yoshida, played by Darren Barnet, won over fans with his abs, and his budding romance with Devi (Maitreyi Ramakrishnan). The show quickly shot to the top of Netflix's Top 10 list in multiple countries around the world, and the fandom wasted no time in making Paxton Hall-Yoshida a hot topic on Twitter, with plenty of thirst tweets to show for it. (Vulture even created a thirst Tumblr dedicated to him.)

If he's tired of talking about his new title, Barnet hides it well. "You know, I love it," he tells Bustle over Zoom, flashing a smile. "It's a lot of pressure. I hope I live up to the hype." Spoiler alert: he does, and that's not just because of the multiple shirtless scenes or his instantly iconic hyphenated name. Off screen, the 29-year-old Barnet is nearly as charming and protective of Devi as fans would want him to be, as evidenced by his assessment of Never Have I Ever's fandom debate: Team Paxton or Team Ben (Jaren Lewison).

"[Ben's] been absolutely terrible to her his entire life," he says. "He's very, very obsessed... with being cool." Ben might be a nerd, but he's also the one who told Devi that "U.N.," the nickname he and the rest of the school have for Devi and her group of friends, stands for "unf*ckable nerds," words that, as Barnet points out, "could destroy a teenage girl." That and, as the actor points out, Ben's not exactly available. "Let's not forget guys, he has a girlfriend when he kisses Devi at the end. I don't like that," he says.

As for why fans should root for his character, Barnet admits that Paxton "does see himself as cooler than [Devi]." But, he adds, "he's been there for Devi and he's not afraid to let everyone know that he cares about her." He even goes so far as to call Paxton a kind of "knight in shining armor" — you know, if a knight saved a princess from drowning after falling into a pool at a house party.

The actor even has his own plan for how he sees their relationship playing out in a possible Season 2. (Never Have I Ever hasn't yet been picked up for another season.) "Devi's been pining after Paxton for so long... and now Paxton's realizing maybe he likes her, but maybe it's too late," he says, pitching a role reversal in the love triangle for Season 2. "Maybe in Season 2 there's a direct rivalry between Ben and Paxton, and a switch in the power dynamic where now Paxton is trying to figure out how to win Devi back."

In addition to seeing an expansion of the Paxton-Devi-Ben love triangle, Barnet hopes that Season 2 will also include a Paxton-centered episode, which would require a brand new celebrity narrator to deliver his inner monologue. "I would love Brad Pitt, James Franco, or George Clooney," he says. "I'm a huge Brad Pitt fan, so, come on Brad!" Clearly only a heartthrob can narrate the life of, well, another heartthrob.