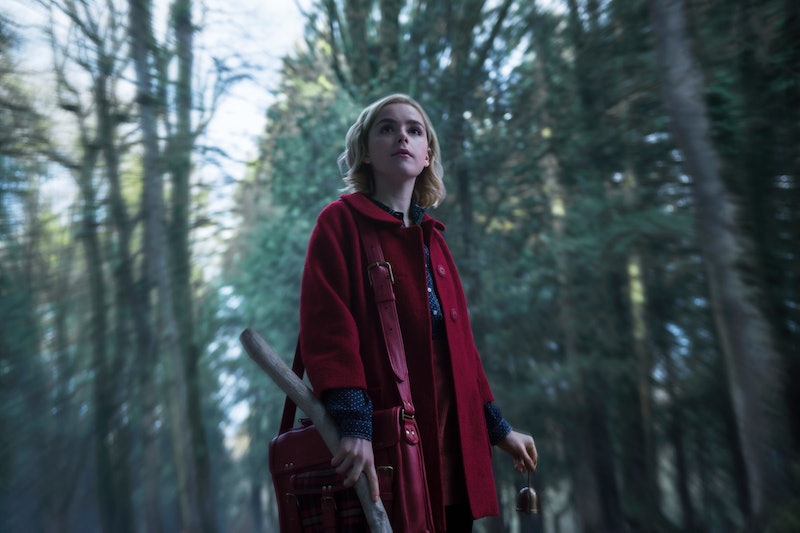 In what would probably have been the most controversial TV casting decision of all time, showrunner Roberto Aguirre-Sacasa revealed to Entertainment Weekly that the Chilling Adventures of Sabrina's Salem was almost a dog. Yes, a dog. Before you start writing out a Twitter rant, '90s kids, rest assured that Salem is still a cat. However, he probably won't be sharing much screen time with Sabrina.

"I get a call that says, 'Kiernan [Shipka] is allergic to the cat. It did go through my mind: Could Salem be a dog?"

Of course Salem can't be a dog. A cat is a witch's best friend, allergies or not. And leaving Salem out of the series would have been an issue too. Even though Netflix's take on Sabrina Spellman's story is darker than the '90s sitcom starring Melissa Joan Hart, Salem is too iconic to be left out of even the darkest adaptation. Thankfully, Aguirre-Sacasa found ways to work around his star's allergies, and Shipka seems to be taking her furry co-star's presence in stride. She joked to EW, "We keep at a safe distance. It's like, 'Actors That Didn’t Get Along in Shows: Kiernan and the Cat Hated Each Other.'"

The real question that Sabrina fans should be asking themselves is what will Salem's backstory be in the Netflix series? In the '90s show, Salem is a warlock who is trapped in the body of a cat as punishment for crimes that he committed. However, in the comic book series on which Chilling Adventures of Sabrina is based, Salem is a human who was cursed by the witches of Salem for refusing to marry a witch he gets pregnant. If that's his history with witches, it will definitely make sense if he doesn't want to offer Sabrina any snappy advice about growing up.

Whatever the show has planned for Salem it's likely to be intense. This version of Sabrina's story is already shaping up to be downright nightmarish. In the same interview, Aguirre-Sacasa discussed the major decision facing the teenage witch at the beginning of the series. Sabrina will be asked to make a choice between the mortal world and the world of magic on her 16th birthday. If she chooses the latter, she has to pledge her soul to the devil. And here you thought learning calculus was the hardest part of being a teen.

"Sabrina has to stand up to the devil and these very formidable opponents, and someone like Kiernan has the gravitas and assuredness to do that."

There's no doubt about that. After all, Shipka more than held her own up against the likes of Jon Hamm and January Jones during seven seasons of Mad Men. Seeing her take on the devil and his minions is sure to be thrilling, just like watching her version of Sabrina's romance with Harvey bloom will no doubt leave viewers swooning. And even if Salem can't be right by her side through every bit of the drama, knowing that the beloved feline will still have a presence in the show is a comfort. Because really, no matter how awesome dogs are, Salem just wouldn't be the same if he wasn't a snarky black cat.