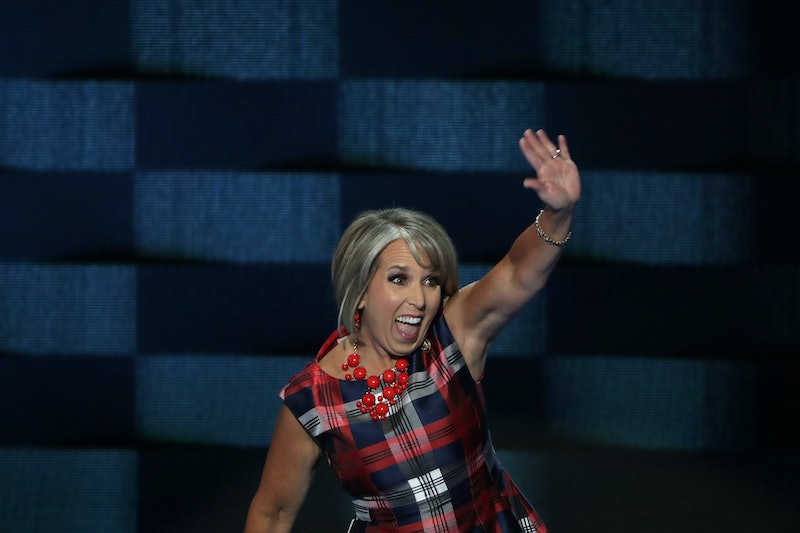 POTUS may want a wall, but that doesn't mean all politicians near the border do, too. In a humorously topical tweet on Tuesday evening, New Mexico Governor Michelle Lujan Grisham hit back at Trump's border wall talk by literally running through a wall, herself. The video was first created for Grisham's campaign for governor — but it was still all too relevant following the State of the Union.

Grisham captioned the video, "All this talk about walls tonight... #SOTU," but she went much deeper in the video itself. In the 30-second clip, Grisham said, "New Mexico is 49th in employment and 50th in schools. We need to bust through some walls to make changes."

Grisham then went on to list all of the walls she planned to "bust through," including issues of infrastructure, the need for apprenticeships and skills training, and the importance of investing in small businesses and schools. "And here's what I think of Trump's wall!" she concludes, before running through a final wall.

Grisham's pithy take on the SOTU was just the beginning, though. On Tuesday evening, before the SOTU, Grisham announced her decision to withdraw National Guard troops from the southern border in New Mexico. Via CNN, Grisham said at a news conference on Wednesday, "I'm not going to participate, nor do I think it's appropriate in any shape or fashion to use the National Guard to attempt to militarize the border where we're dealing with asylum seekers who their constitutional rights continue to be breached."

When she first announced her decision on Tuesday, Grisham made it very clear that she not only rejected the need for National Guard troops, but the notion of there being a crisis on any level at the border. She said, "New Mexico will not take part in the president's charade of border fear-mongering by misusing our diligent National Guard troops."

Trump first ordered National Guard forces to secure the border last April, which took place prior to Grisham's election. Now, CNN reports that Grisham has ordered troops from six different states to "return to their home states immediately." She did mention that a small group of National Guard personnel will stay in the southwestern area of the state to address a specific concern in Hidalgo County.

"I recognize and appreciate the legitimate concerns of residents and officials in southwestern New Mexico, particularly Hidalgo County," Grisham said, according to CNN. "[They] have asked for our assistance, as migrants and asylum-seekers continue to appear at their doorstep."

On Wednesday, the National Guard confirmed that it would be carrying out the orders of Grisham. Per CNN, a statement by the organization read,

Under the governor's direction, New Mexico National Guard leaders have begun demobilization operations to withdraw the majority of its troops from the southwest border, with the exception of troops in southwestern New Mexico counties where troops will remain in place to assist with the ongoing support requirements.

Trump has not commented on Grisham's decision. However, at the SOTU address on Tuesday night, POTUS did confirm that he has ordered "3,750 troops to our southern border to prepare for the tremendous onslaught" of migrant caravans. It's not clear if those troops will still deploy to the southern border or not now, given Grisham's blanket rejection of the need.