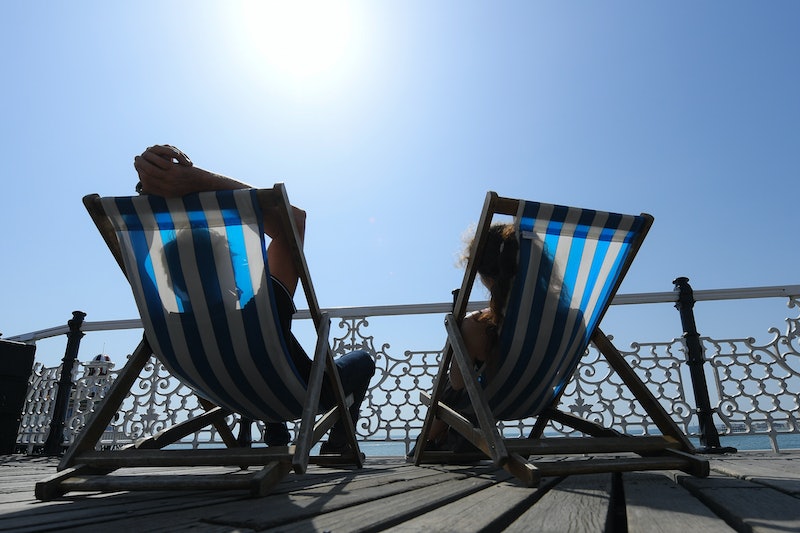 Driving to work in the rain. Sitting in a sunny spot at a cafe. Enjoying a cool breeze on an afternoon walk. Sometimes everyday moments seems to lend themselves a little too perfectly to a soundtrack. Now, you can make your moody soundtrack dreams a reality: the app Forecast creates music playlists based on your local weather. Catch me crying gently to Simon and Garfunkel while looking through a rainy window.

The app is the brainchild of electronica musician Tycho, who launched the website as a promotion for his new album “Weather.” Tycho (aka Scott Hansen) partnered with Lee Martin, the app’s developer and the former vice president of design at Songkick, to create Forecast. The final product is a clean, cool, easy-to-use app that doesn’t require you to download anything.

When you go to the Tycho Forecast website, either on your desktop or mobile device, it prompts you to “tap the sun to create a playlist inspired by your current weather.” After allowing the site to see your location, it gives you your current weather forecast—mine, in Kansas City, is currently 76 degrees and cloudy. Then, you can select how you want to save your playlist, either to Spotify or Apple Music. If you’re curious what 76 and cloudy sounds like, according to Tycho and Martin, it’s a little bit of Zeppelin, some Yo La Tengo, a live recording from The Velvet Underground, and, of course, a bunch of Tycho. My 24-song, overcast playlist also appropriately starts off with a song by SALES called “Rainy Day Loop.”

Martin, the app’s developer, wrote a blog post on Medium explaining his and Tycho’s process behind the app. Martin explains how he aggregated data from a couple different weather forecasting apps and then figured out a way to “rank” the weather on a scale correlated with Spoitfy’s music algorithms. “In the case of this app, we looked at several audio features and simply chose which weather measurement might symbolically relate,” Martin writes. “For example, a gusty day might produce tracks with a higher tempo. Or the temperature might affect the valence or mood of the songs. We took liberty in these connections and just had fun with out.”

From there, songs are sorted by these scores and then Forecast selects the 25 highest scoring songs. Then, the selected tracks are shuffled and turned into a local weather-based playlist. Martin writes how he had three principles for the app: simplicity, accessibility, and magic.

“It’s simple in that the user merely needs to tap the sun in order to invest themselves in the app,” he writes. “It’s accessible via the web from a url. No downloading needed.”

As far as the third principle? “And it turns the fucking weather into music!” Martin write. “That’s magic.”

The Forecast app also changes with the weather. I just reopened the app since it’s gotten a little bit warmer, a tad sunnier since the beginning of this post. My Tycho Forecast playlist got a little warmer with it as well. There’s a bit of overlap from the first playlist it created for me, but the order is different as are at least half the song. One notable new addition? Tycho’s “Sunrise Projector.”

You can find your personalized weather playlist at weather.tychomusic.com. While you’re at it, check out Tycho’s new album “Weather” which is out now.