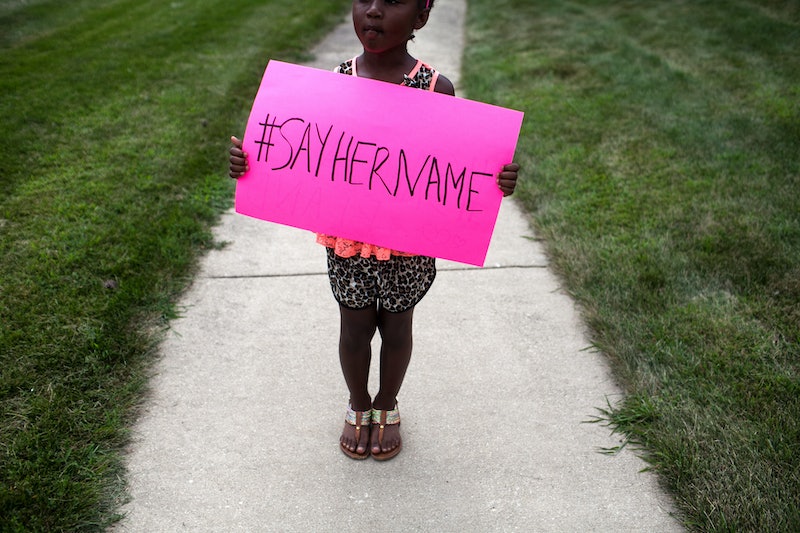 On Monday night, a Texas television station aired newly released video of Sandra Bland's arrest that had not been seen by her family or legal counsel at the time of her death or during the following civil court trial, the Associated Press reported. Three days after the video was taken in 2015, Bland was found dead in the Waller County Jail outside Houston, and officials later determined that suicide was the cause of death. What this new video shows has led her family to ask that her case be reopened.

The 39-second clip taken from Bland's own cell phone shows her perspective as trooper Brian Encinia, who pulled her over for failing to signal, orders her to get out of the car. "Get out of the car! Now!" he shouts at her, as seen in the video. "I will light you up!" he adds as he points a taser in her face.

Bland replies, "Why am I being apprehended? You just opened my car door ... so you're threatening to drag me out of my own car? And then you're going to stun me?"

"Open up the case, period," Bland’s sister Shante Needham told the Texas news channel WFAA, who released the footage Monday. "This is crucial to everything [Encinia] said in the report. This not only shows that he lied but that really he had no business stopping her period."

Encinia was fired from his job with the Texas Department of Public Safety (DPS) and charged with perjury due to the police report he'd written, The Atlantic reported. Later ,the charges were dropped in exchange for him agreeing to never work in law enforcement again, according to Reuters. Bustle has reached out to Encinia's attorney Chip Lewis about the new tape and the Bland family's call to open the case.

Cannon Lambert, the family's lawyer, told WFAA that he had not previously seen the footage. "I've never seen that," Lambert said. "It wasn't on anything we had." Bustle has reached out to Lambert for comment.

Meanwhile, a DPS spokesperson tells Bustle the cellphone video is "not newly discovered evidence." DPS says the video was in the Ranger Report of Investigation and that the Ranger report "was made available to all the litigants during the civil litigation filed by her family." DPS also stressed that the video has been treated as public information and was provided to another journalist who asked for it in 2017.

DPS also told WFAA in a statement that the video was on a hard drive of evidence shared with Bland's family's attorneys before the court case. "The premise that the video was not produced as a part of the discovery process is wrong," DPS said in the statement. "A hard drive containing copies of 820 Gigabytes of data compiled by DPS from its investigation, including the dash cam videos, jail video footage and data from Sandra Bland’s cellphone, was part of discovery."

"That video shows he was not in fear of his safety, that she was not reaching for anything. It's already in her hand, she's recording him. He sees exactly what's in her hand," Lambert told WFAA. "How can you tell me you don’t know what’s in her hand when you’re looking right dead at it. What did she do to make him feel his safety was in jeopardy? Nothing."

WFAA reported that the special prosecutor did have a copy of the cell phone video, but it's not known whether the grand jury that declined to press criminal charges against Encinia had seen it.