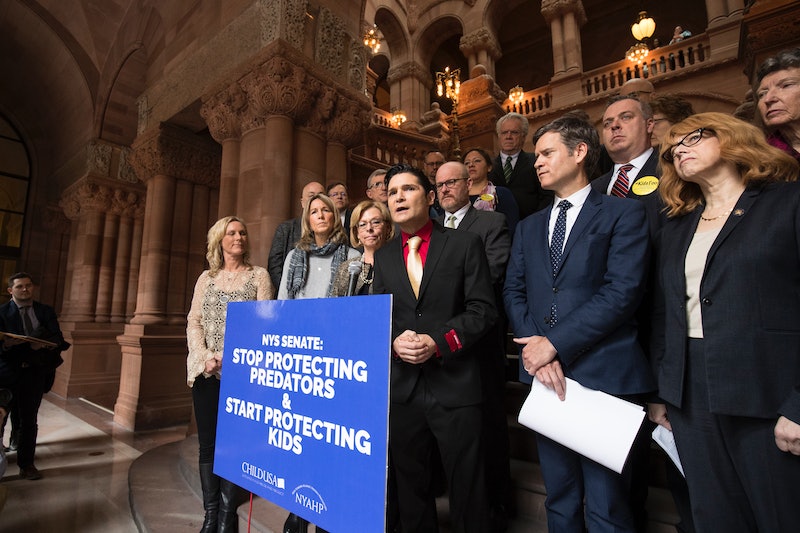 Marking its second major state-level legislative victory in the last week, New York's newly-passed Child Victims Act will aim to expand protections for abuse survivors, allowing them to take legal action well into adulthood. Previously, according to The New York Times, survivors had to choose how to move forward before they turned 23 years old, after which they were no longer allowed to sue or press charges.

"Survivors of child sexual abuse, what happened to you was real and you deserve justice. The State of New York and the force of its law is behind you, and you will not be turned away." New York state Sen. Brad Hoylman said in a tweet shared shortly after the Senate approved the measure.

Gov. Andrew Cuomo is widely expected to sign the bill into law. Bustle has reached out to his office for comment.

Like the Reproductive Health Act that the state legislature approved just last week, the Child Victims Act was stalled for years, failing to make its way through a Republican-dominated Senate, even though it repeatedly passed in the state's Assembly, according to The New York Times. The state's Democratic lawmakers were quick to celebrate the bill's success on Monday, with many of them apologizing to abuse survivors who were unable to take legal action because of the state's stringent statute of limitations.

“We apologize for making you wait so long, in this chamber, we made you wait. I want to say to the #NYAssembly who passed it over and over again, thank you," tweeted Sen, Andrea Stewart-Cousins. "This is a bittersweet victory. But it is an end to a very long and arduous journey.”

The New York Daily News reports that the bill's opposition has included, at times, the Catholic Church, some Orthodox Jewish groups, and the Boy Scouts of America. Some critics reportedly cited concerns that allowing lawsuits to go forward many years after the fact could pose serious financial burdens on such institutions. However, late last week, the state Catholic Conference removed its opposition, pointing to legislative language that would reportedly allow for lawsuits to be filed against public, as well as private, institutions.

“We are pleased that the sponsors have amended the Child Victims Act to include all survivors of abuse wherever it occurred,” conference spokesman Dennis Poust told the Daily News. “We therefore remove our previous opposition and pray that survivors find the healing they so desperately deserve.”

After November's midterms, state Democrats took control of New York's Senate, enabling bills like the Child Victims Act and the Reproductive Health Act to make their way to the governor's desk. Under the new law, victims will have until they are 28 years old to press charges, and they will be able to file abuse-related lawsuits until they turn 55, according to the Times.

"The passage of the #ChildVictimsAct will finally provide survivors with the justice they have long deserved and will serve as a loud and clear message that child abuse will never be tolerated in New York," New York Attorney General Letitia James tweeted on Monday. "I applaud the NYS Legislature, today is a historic day for justice."