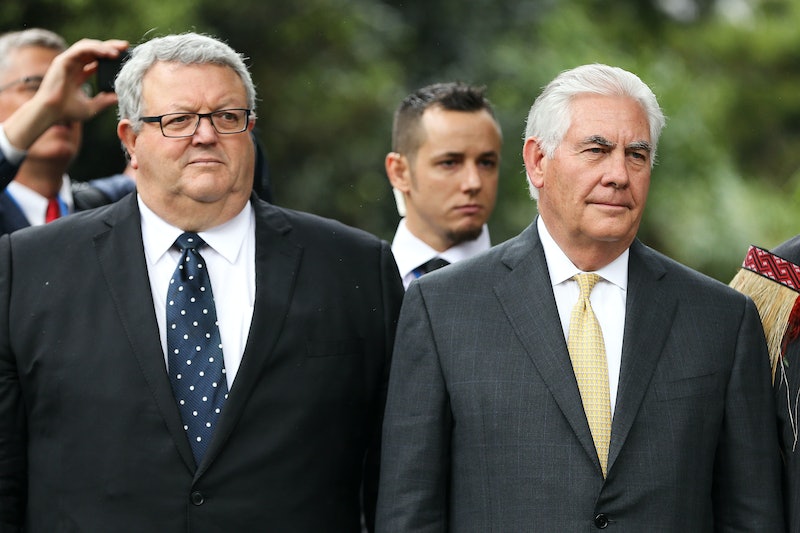 Seems like Secretary of State Rex Tillerson received a less-than-friendly welcome from New Zealanders, reaffirming that international popularity for the U.S. is not at an all-time high. Several New Zealanders flipped the bird at Tillerson as he arrived to visit with Prime Minister Bill English and Foreign Affairs Minister Gerry Brownlee on Tuesday, presumably in response to President Donald Trump's recent announcement that the United States would be withdrawing from the Paris Agreement.

Just when you thought the Scots were the chief non-American trolls of the Trump administration, the New Zealanders leveled up. The roughly 200 protesters, activists with the climate change action group 350 Aotearoa, were in the capital of Wellington to make their anger known to the former ExxonMobile CEO, according to The Guardian. Greenpeace New Zealand even referred to him as a Trump "henchman" — ouch!

Journalists on the scene took notice as well. Gardiner Harris, a New York Times correspondent, told Stuff.co.nz that this unfriendly greeting stood out to him:

In a hilarious "apology" penned in New Zealand pop culture site The Spinoff, Toby Manhire (under the author name of Aotearoa New Zealand) flexed some fun mental gymnastics to wonder whether the gesture might be considered a tribute to Trump:

Would you believe us if we said it was a salute to your own president, a celebration of his instrument of choice, his slender and vertiginous tweeting finger, his digital native, his towering inferno, his middle Twistie, his Covfefe-flapping bumper knuckle?

Of course, Manhire quickly admitted that was B.S., and leveled a more honest answer:

The truth is — and a little humility is in order here — that it was an unforgivable act. It was selfish, unthinking and rude. It was insulting and ill-judged. Grotesque. Contemptible, even. It was self-indulgent; a gesture, you might well say, of vandalism.

While it probably doesn't feel great to be greeted by a crowd of bird-flipping critics on the opposite side of the world, the "single finger salute" to Tillerson certainly affirms that the global response to regressive climate policies will not be friendly.