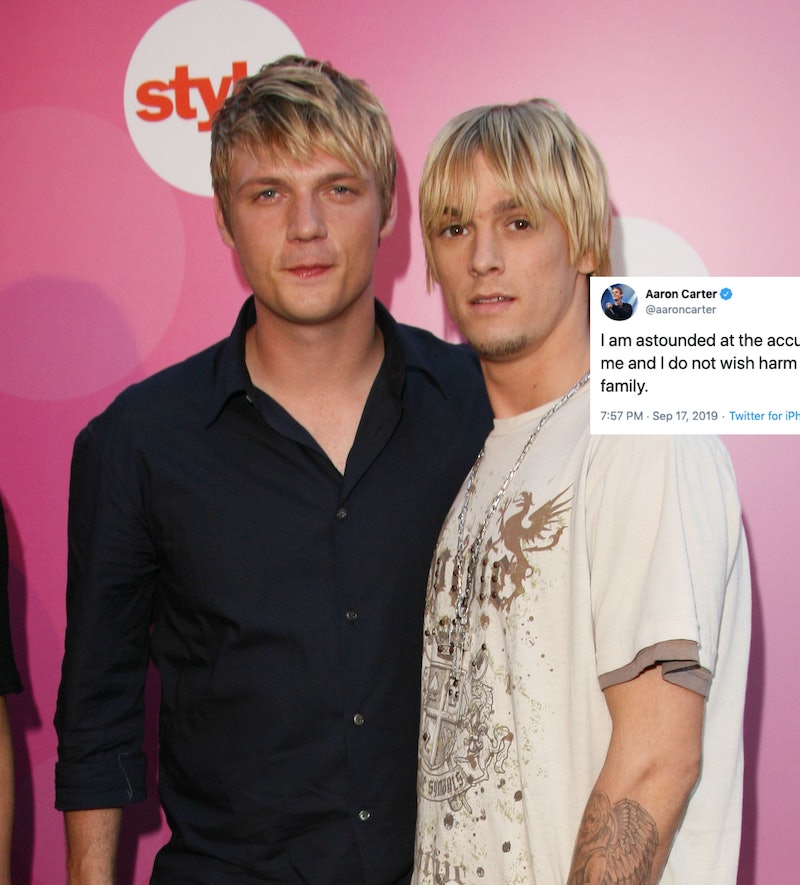 You're probably going to want to buckle up for this one, because whew — it is a saga. After years of public ups and downs between the famous brothers, Nick Carter filed a temporary restraining order against Aaron, according to TMZ. The restraining order reportedly states that Aaron must stay 100 feet away from Nick, his wife, and his child. The younger Carter responded to the news via Twitter on Tuesday, Sept. 17, and the situation has only gotten messier since then.

Shortly after the news of the restraining order began to spread, Nick posted a lengthy explanation for the filing, alleging that Aaron made violent threats against him and his pregnant wife, Lauren Kitt. Aaron vehemently denied Nick's allegations, and instead claimed Nick is retaliating against him for speaking to one of the women who previously accused the BSB member of sexual assault. (Bustle reached out to Aaron's assistant and Nick's reps for comment on the situation, but did not receive an immediate response.)

After revealing he'd be seen served, Aaron went on quite a Twitter spree. The singer claimed he hasn't seen his brother in four years, and said that he's "astounded at the accusations being made against me and I do not wish harm to anyone, especially my family." He also tagged Nick directly in one post, and wrote, "Take care. @nickcarter we’re done for life."

At the time of publication, Nick had only posted a single tweet in regards to the feud with his brother. In it, the Backstreet Boys member wrote that, "After careful consideration," he and his sister, Angel, had filed the restraining order against Aaron due to "increasingly alarming behavior and his recent confession that he harbors thoughts and intentions of killing my pregnant wife and unborn child."

He then went on to say, "We love our brother and truly hope he gets the proper treatment he needs before any harm comes to himself or anyone else." Nick also added, "#mentalhealth #GunControlNow #GunControl" to his tweet, seemingly implying that a gun may have been involved in Aaron's alleged threats.

Aaron reportedly inherited hundreds of guns from his late father Bob, per Fox News, and continued to add to the collection of firearms since his passing. According to TMZ, Aaron claims that he's "passed all the mental health checks to own a gun," and insists that he's a responsible gun owner who simply fears for his safety due to his celebrity status.

As fans know, Aaron has long-been open about his struggles with mental health and addiction in the past. In fact, the singer discussed both of those topics in great detail during a two-part interview on The Doctors, which aired just a few days before Nick and Angel's restraining order against him was filed. However, Aaron has reportedly been sober for at least two years now, per Page Six, and tweeted about still being in recovery during Tuesday's Twitter spree. "I’m in recovery," he shared. "I need people to support me, I need people to not use me to cover up their skeletons."

Aaron also tweeted that he believes the restraining order is part of an attempt by his siblings to have him placed under a 5150 (also known as an involuntary psychiatric hold), which can be issued "when a person, as a result of a mental health disorder, is a danger to others, or to himself or herself, or gravely disabled," according to the California law code.

Additionally, Aaron claimed this happened as retaliation for communicating with Melissa Schuman, a former member of the group Dream, who accused Nick of sexually assaulting her when she was 18. Nick denied the allegations in 2017 when Schuman went public, and the case against him was eventually thrown out after being reviewed by prosectors as the statute of limitations passed, according to the BBC.

After being brought into the situation, Schuman retweeted some of Aaron's posts and voiced support for the younger Carter brother. "Of course I believe and stand with Aaron because I have been in active communication with other Nick Carter survivors!" Schuman tweeted. "Holding their stories, continuing to advocate despite not being supported or believed." She then went on to add that people "are villianizing the wrong Carter," in regards to Aaron's critics.

This whole ordeal may be a lot for fans to process, and a lot of questions still remain unanswered. Hopefully, though, the truth will eventually come out, and all of the parties involved can find some peace.

More like this
Florence Pugh Won’t Discuss Harry Styles Sex Scenes In 'Don’t Worry Darling'
By Grace Wehniainen
Demi Lovato Said Her Dream Music Collaboration Is Hayley Williams
By Grace Wehniainen
'Grey’s Anatomy' Star Kevin McKidd Hinted How Ellen Pompeo’s Step Back Will Change Season 19
By Grace Wehniainen
Who Plays Trent In 'Never Have I Ever'? Benjamin Norris Calls His Character A “Himbo Stoner”
By Grace Wehniainen and Radhika Menon
Get Even More From Bustle — Sign Up For The Newsletter