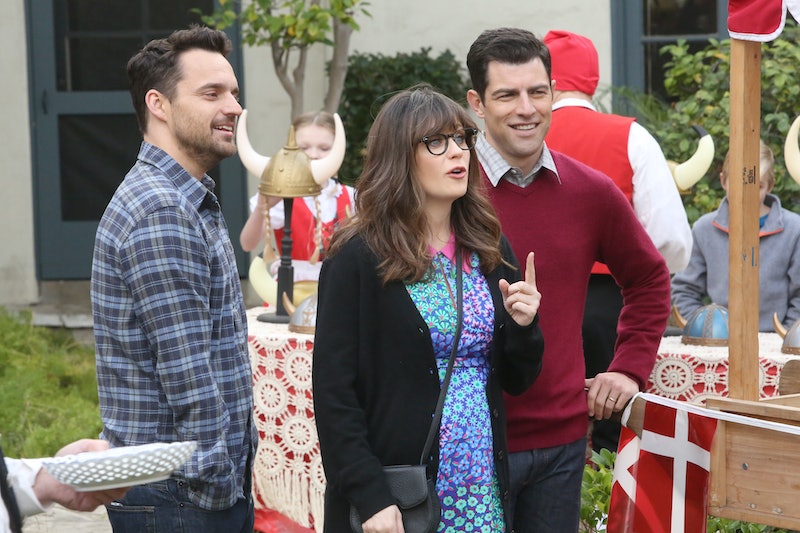 My love for New Girl knows no bounds, but mostly, I watch the show for two reasons: To hear Schmidt's new most douchebag jar-worthy quotes every week, and to find out when Nick and Jess are finally going to get back together. Despite the fact that he's still with Reagan, over the last few episodes, a few hints have been dropped that these two are destined to be together, and the latest installment was no exception. On Tuesday night's episode of New Girl, "Rumspringa," Nick helps Jess get over her nerves about her new job, and in the process, it's quite clear that these two need to get back together. Like, now.

Now that Jess has officially been promoted to principal — aka her ultimate goal and dream job — reality is starting to hit, and it doesn't take long before she's stressing out about whether or not she's capable of doing it. Nick's solution? Do for Jess what he used to do for Schmidt when he was stressed in college: Go for a "boyride," or take her somewhere for the day to get her mind off of things. Schmidt is also about to have his first day after his promotion, so it seems like the perfect option.

So naturally, Jess, Nick, and Schmidt end up at a Danish festival with quilts and period actors, because this is New Girl and why wouldn't they?

It's all well and good until they end up locked in a wine distillery with no way out — and Jess and Schmidt are freaking out they're going to miss their first day at their new jobs. And that evolves into a breakdown from Nick, who is stressing himself over the fact that Reagan makes him feel like he's not a real adult because his room looks like it belongs to a kid. Eventually, they manage to break free of the distillery, and it looks like Jess is going to be an awesome principal despite how nervous she is.

So how does this all lead to Nick and Jess being that much more perfect for each other? It's not just that he did actually end up helping her take her mind off of what was bothering her, but it's more in the way that the two of them have a connection that neither of them have with anybody else. Nick gives Jess the blazer he got at the festival, and Jess reassures Nick that she likes his room just the way it is. What says "these people are literal soulmates" better than actual proof that they can be themselves around each other?!

I adore Reagan (although that wasn't always the case), but I feel her days in Nick's life are numbered. The sooner this show actually allows Jess and Nick to be endgame, the happier we will all be. Maybe they can have a double wedding with Winston and Aly? Wishful thinking.