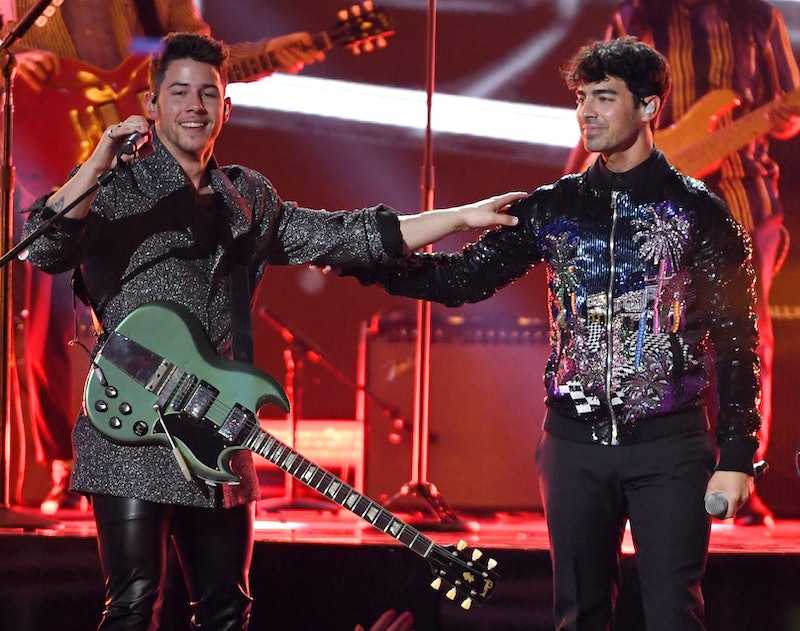 Holidays are for family traditions, and the Jonas Brothers are no exception. Every July, you can count on the JoBros to hug it out for America. Nick and Joe Jonas' traditional Fourth of July family photo came through for the fans — but the 2019 edition had to call on Photoshop for a little backup.

Every year since 2012, two (or more) of the Jonas Brothers celebrate the Fourth of July together and post a picture on social media to commemorate the holiday and the summer get together. Usually they're watching fireworks, like most of us are usually doing on the Fourth. But the bros are separated this year, both abroad with their respective significant others. Joe is on his honeymoon with Sophie Turner, while Nick and Priyanka Chopra are making their own pasta in actual Italy.

The photo (below) is the traditional embracing pose, 'shopped onto two different backgrounds — a balcony, and a fireworks display. "Better late than never," Nick said in the caption, "and edited if you’re on different parts of the globe. Me and @joejonas July 4th tradition continues."

Meanwhile, Joe's post of the photoshop simply said, "Don't worry. We didn't forget." Below, Nick commented, "Nailed it." Where is Kevin in all of this? Who can say. This has always been more of a Nick and Joe thing.

"Haters will say it's photoshopped," joked another commenter... because it is. The meme is real this time, y'all. You can tell they really went out of their way to pose with their arms around nothing, too, because Nick posted other photos wearing that same outfit in Italy that day. This is commitment.

In 2018, the traditional photo included Kevin and even the bonus Jonas brother, Frankie. There's another cute post from that family barbecue as well of everyone carrying Frankie together.

The boys were separated in 2017 as well, but went for a collage approach. They've clearly upped their game and skills in the past two years. "No way we could let the tradition not happen this year even though we're not together in person on this Fourth of July," Nick said in 2017. "Happy Independence Day everyone." This is very serious!!!!!!

Here are a few more, going back year by year. In 2016, they sang with the Boston Pops, who put on a pretty epic Fourth of July concert every year — this is probably the most traditionally patriotic way to celebrate the holiday.

2013's post is a little different — but all traditions take a little working out in the beginning.

The very first one, in 2012 is one of the best. It's also one of Nick Jonas' very first Instagram posts.

So much has happened to Nick and Joe Jonas in the past seven years. They've both gotten married, they got their friggin' family band back together, and Nick in particular has been on quite the hair journey. These Fourth of July posts are constant, though, and not even thousands of miles can stop the brotherly love.