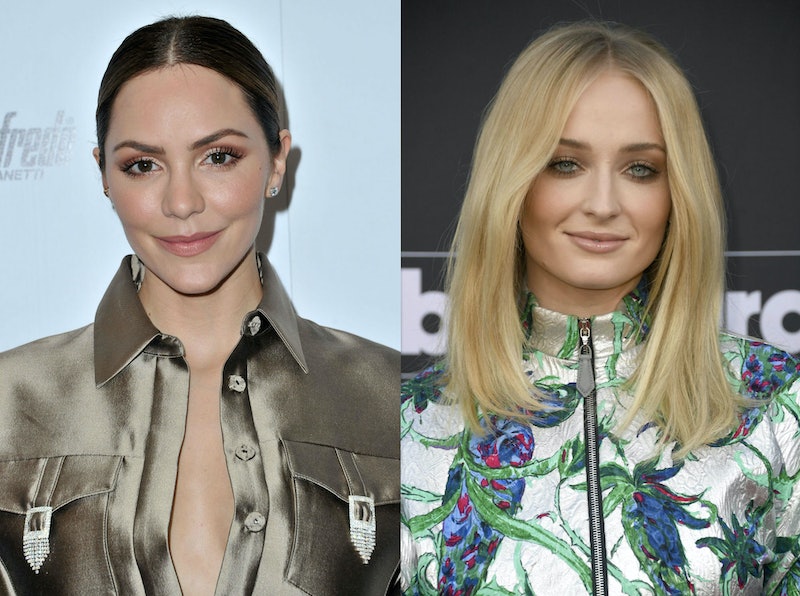 This really needs to be the next pair of celebrity best friends. Katharine McPhee and Sophie Turner's honeymoon tweets prove they are destined for a fabulous friendship. McPhee took to Twitter on Tuesday expressing frustration over paparazzi following she and David Foster on their honeymoon. The former American Idol star then dragged Turner and Joe Jonas into the conversation in the most hilarious way. What made their exchange even more amazing was Turner's response to McPhee.

"To the pack of paps stalking me while I'm in the middle of the ocean in Europe - Joe Jonas and Sophie Turner are just two yachts over. Please focus on what truly matters."

Based on the many photos and videos the singer has shared on her Instagram Story, she's honeymooning with Foster in Italy. The newlyweds are clearly trying to enjoy their time as a married couple, but it sounds like the paparazzi is getting in the way. McPhee had the perfect approach to the situation, too. She expressed her annoyance in a direct way, but also made a joke out of it all by pointing the photogs in the direction of Turner and Jonas. They also seem to be on their honeymoon at the same exact time as Foster and McPhee and in the same exact location.

At this time, it's unclear where the Game of Thrones actor and the Jonas Brothers singer are honeymooning. If you don't take McPhee's tweet as a joke, then they could very well be "just two yachts over." Of course, McPhee could be simply be teasing in hopes of getting the paparazzi to leave her alone, all while making them go on a while goose chase. Either way, her tweet game is strong.

As for Turner, she clearly appreciated McPhee's creativeness. She replied to the Waitress star,

"Can't wait to travel to Cabo tomorrow together! See you at the airport. #tequila"

Turner followed in McPhee's footsteps by tweeting yet another joke. These two are definitely Twitter masters. And Turner's hashtag? Perfection. But, really, they need to go to Cabo and drink #tequila together.

For those unaware, McPhee and Foster got married on June 28 in London. E! News reported that Turner and Jonas had their second wedding in France on June 29. Their weddings were one right after the other, so their honeymoons would understandably be at the same time.

Both McPhee and Turner have the best sense of humors. For example, there was that one time McPhee didn't have time for anyone criticizing the age difference between she and Foster. Turner also is all about having a good time, like when she chugged wine at a hockey game.

They just seem like two really fun individuals, who also have a lot in common. This is exactly why they need to be best friends. If Turner and Jonas are honeymooning next to McPhee and Foster, they really should spend some time together, because you know it'd make for two unforgettable honeymoons.

More like this
Twitter Is Losing It Over Beyoncé's "ALIEN SUPERSTAR" & These Memes Prove It
By Radhika Menon
Kathy Hilton Tried To Explain Why She Misidentified Lizzo As Precious On Live TV
By Jake Viswanath
Sophie Turner & Joe Jonas’ Fave Taylor Swift Album Is Full Of “Bangers”
By Sam Ramsden
The Sean Bean Intimacy Coordinator Controversy, Explained
By Sam Ramsden
Get Even More From Bustle — Sign Up For The Newsletter