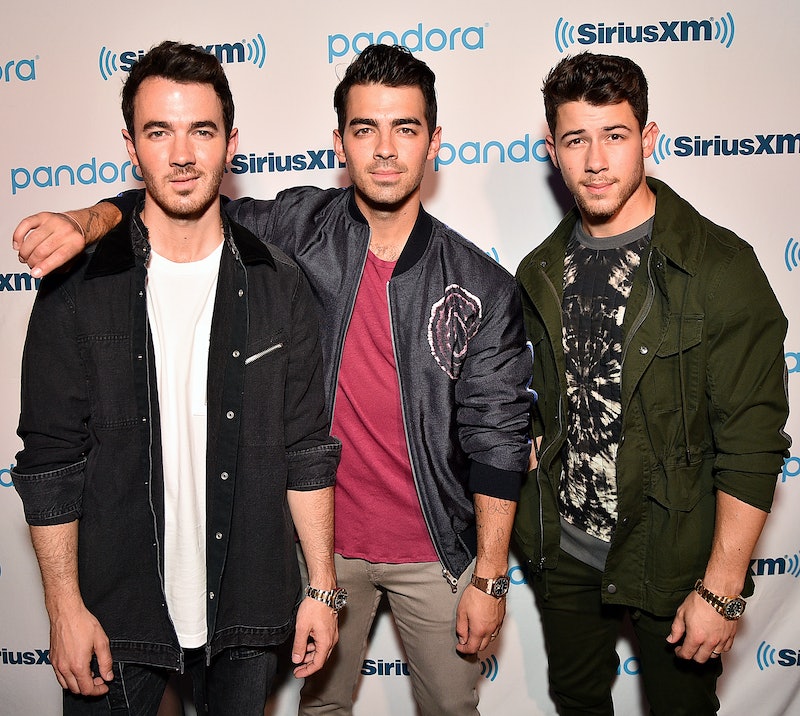 It turns out that everyone is excited about the Jonas Brothers reunion — including one of the biggest rappers in the world. After a video of Hova "bopping" went viral this week, Nick Jonas' reaction to Jay-Z attending a Jonas Brothers concert provides the best backstory to the hysterical viral video.

At the Jonas Brothers' concert at Madison Square Garden on Thursday, Aug. 29, Barstool Sports' Francesca Mariano captured a video of Jay-Z dancing to one of the band's biggest hits, next to Nick's wife, Priyanka Chopra. "The year is 2019 and Jay Z is at a Jonas brothers concert listening and bopping? to Year 3000," she wrote on Twitter, alongside a clip of the rapper nodding his head to the Disney-era hit.

But while some fans might think that Jay-Z is an unlikely person to spot in the audience of a Jonas Brothers concert, Nick revealed that the rapper actually has a close connection to the band. "I mean, he's a part of the team. I'm a Roc Nation artist, we are Roc Nation's artists," Nick told Entertainment Tonight in a recent interview. "He wrote me and said, 'I'm coming tonight, I can't wait.'"

Despite his friendship with Jay-Z, even Nick was surprised that he got so into "Year 3000," out of all the songs in the Jonas Brothers' catalog. "The fact that he was there supporting during 'Year 3000' is kind of a scenario I never thought would happen," he told ET.

While the Jay-Z and Jonas Brothers connection might seem odd at first glance, this isn't the first time the two artists have enjoyed a musical bond; the rapper name drops the band on "On to the Next One." In the second verse of the 2009 track, Jay-Z raps, "No I'm not a Jonas, Brother I'm a grown up / No I'm not a virgin, I use my cojones," which is a reference to the band's infamous purity rings, which were in the news around the time that the song was released.

Jay-Z isn't the only major celebrity who Nick has had a viral run-in with this weekend, as Mariah Carey posted a photo with him and his wife, Priyanka Chopra Jonas, on social media, where she joked that the three of them were "starting a new band ... lol." In another interview with ET, Nick revealed that Carey is actually friendly with Chopra, as the pair hit it off during a trip to London last year.

"Priyanka went to her show in London I think. Actually, while we were there meeting with our London distributors for [my new tequila] Villa One and she had the best time," he told the outlet. "We were randomly at the same restaurant as Mariah, and unfortunately she couldn't come to the show tonight [at Madison Square Garden] because she had her own show, but in Vegas, we're going to go see Mariah. It's going to be fun."

The Jonas Brothers' Happiness Begins tour is apparently a great place to spot celebrities, as the musicians' wives and family have made multiple appearances at their concerts. During the opening night show in Miami, Chopra, Sophie Turner and Danielle Jonas enjoyed some "J-Sisters" bonding time backstage and in the crowd. In addition to Chopra's many adorable photos from the night, Turner was spotted rocking out to "Strangers," proving that the J-Sisters put on just as much of a show in the audience as the Jonas Brothers do onstage.

Between Jay-Z, Carey and the J-Sisters, it seems like the Jonas Brothers might be getting upstaged at their own concerts — in the best way. Still, based on Nick's delighted reactions to all of the viral videos that have hit social media as a result, it doesn't seem like they mind all that much.