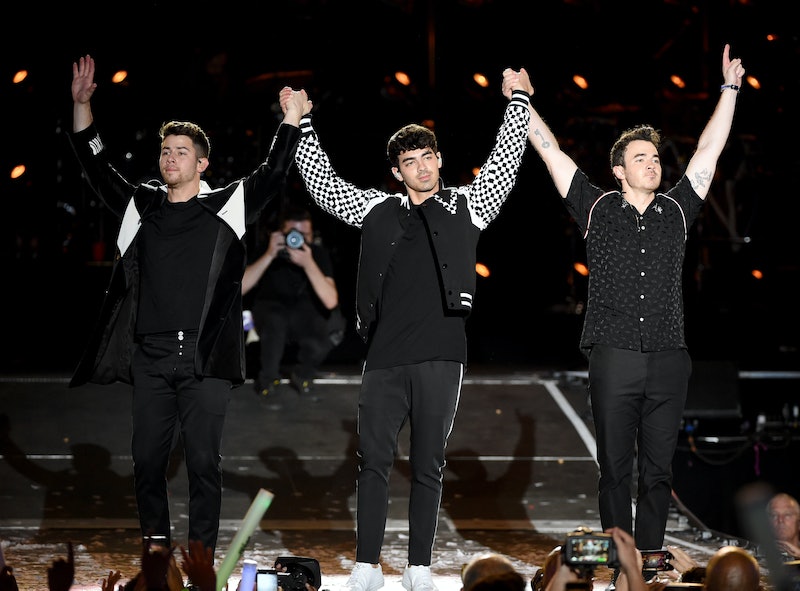 Prepare yourselves, because there's a lot of cuteness ahead. Priyanka Chopra shared photos from Happiness Begins and they will definitely make Jonas Brothers fans happy. Nick, Kevin, and Joe Jonas' reunion tour started on Wednesday and it looked like the best time ever. Chopra was kind enough to share footage from the first show, which also included appearances from her fellow J-Sisters, Sophie Turner and Danielle Jonas, and also Kevin's adorable daughters, 5-year-old Alena and 2-year-old Valentina.

As you can see below, Chopra posed for the sweetest picture with Alena, Turner, Valentina, and Danielle in front of balloons and a backdrop that read "J-Sisters." The former Quantico star captioned the image, "The #jsisters for life #alenajonas #valentinajonas." For those unaware, Danielle, Chopra, and Turner gave themselves the J-Sisters nickname. There's no denying the Jonas Brothers have an amazing group of women by their side, especially during such an exciting time of their lives as musicians. Even Alena and Valentina can't help but support their dad and uncles, like when the Jonas Brothers got nominated in July for four MTV Video Music Awards.

Speaking of Kevin's daughters, it appears that Valentina has really warmed up to Chopra. If you don't recall, at one point, Kevin's youngest wasn't Chopra's biggest fan.

During a March appearance on The Late Late Show With James Corden, Kevin revealed that Valentina is "very connected to Nick," Chopra's husband. He explained to host James Corden about Valentina, "When she met Priyanka, she put her arm around his shoulder. Every time her hand would go around and he was holding Valentina, she would just push it off. Every time. Just like, constantly." However, things thankfully got better between the two. Kevin said, "It just became an ongoing joke. I'm not sure Priyanka loved it at first, but they're cool now." Valentina certainly seems to be "cool" with Chopra now. Whew!

In addition to the cute group picture of and Danielle and Kevin's daughters, Chopra also posted just one of the J-Sisters. She captioned it, "#wivesontour." Chopra, Turner, and Danielle also sported different JoBros shirts. They are seriously the best and picked out some great outfits for the concert.

If that isn't enough, Chopra also posted several videos on her Instagram Story. While showing off what looked like a full house during the first show in Miami, Florida, Chopra caught Turner having fun with Valentina. As you can see below, the former Game of Thrones actor lifted the toddler up to see the stage. The best part? Valentina was carrying a Buzz Lightyear doll. How adorable is that? She clearly wanted to keep some toys close by just in case she got too bored with the show. All jokes aside, they all look like they had such a blast together.

And speaking of having the time of their lives, fans really need to see this video of Turner rocking out to "Strangers." Here it is:

Who else wants to be best friends with her and the J-Sisters? They are so fantastic. It's really great to see how well they all get along and have formed a close bond now that all three women have married into the Jonas family. They all seem to have a strong friendship, so much so that they don't mind attending a Jonas Brothers concert together. Here's hoping the three go to even more shows and share footage on social media for fans to enjoy.