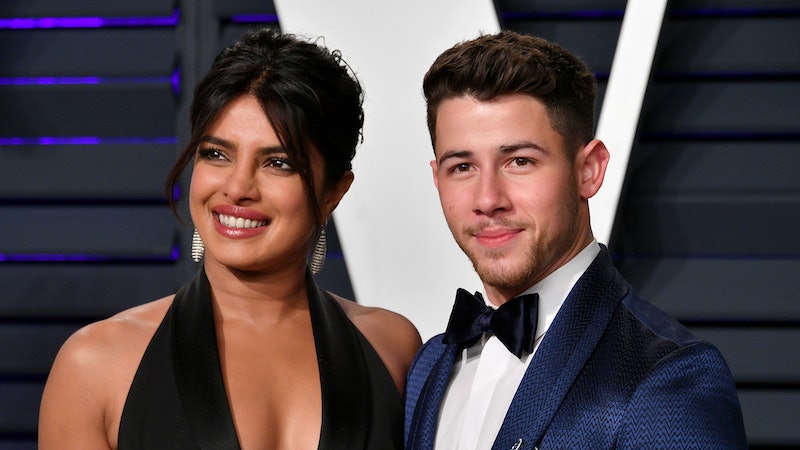 The Jonas Brothers may have only just gotten back together, one member might already be considering the possibility of forming another super group, based on Nick Jonas' response to Mariah Carey's photo with Priyanka Chopra. And, as it turns out, the story behind the "Touch My Body" singer's Instagram post is even more adorable than the picture itself.

On Thursday, Aug. 29, Carey shared a photo with Chopra and Jonas on social media, joking that the three of them were "starting a new band... lol." Shortly afterwards, Jonas told Entertainment Tonight how the sweet snapshot came to be, revealing that his wife actually befriended the singer a few months ago during a trip to London. "Priyanka went to her show in London I think. Actually, while we were there meeting with our London distributors for [my new tequila] Villa One and she had the best time," Jonas revealed.

He continued, "We were randomly at the same restaurant as Mariah, and unfortunately she couldn't come to the show tonight [at Madison Square Garden] because she had her own show, but in Vegas, we're going to go see Mariah. It's going to be fun." As for the possibility of Jonas joining Carey's new band? "I'm down," the singer declared. "If Mariah wants to start the band, I'm for it."

Of course, Jonas might be a little too busy to start a new band with Carey, as the Jonas Brothers are currently in the middle of their Happiness Begins Tour. The shows — which kicked off in Miami on Aug. 7 — feature plenty of the band's newest hits as well as some classic "deep cuts" for the loyal Jonas Brothers fans. In an interview back in March, Jonas revealed that the chance to hit the road once again was the most exciting part of the Jonas Brothers reunion.

"The main thing for us is just getting back in front of our fans and doing some live shows," Jonas told Bustle at the time. "It’s an incredible experience getting back with my brothers and seeing the reaction from the world. It’s been overwhelming and really incredible. We’re kind of waking up each day not believing that it’s real."

Chopra has been supporting her husband during the Happiness Begins tour, even sharing videos and photos from behind the scenes of the first show alongside her fellow "J-Sisters." The couple are dedicated to focusing on their careers and supporting one another's — in fact, in February, the actor told reporters that she and Jonas were too busy with work to consider having kids any time soon.

"We both know that that’s something that needs to happen, but it’s not something I think about very much," Chopra said at the premiere of her film, Isn't It Romantic. "We’re both very driven, we love our work, we’re married to our work, and we’re both very supportive of each other’s work. So I’m sure it will happen in an organic way."

Whichever comes first for Jonas and Chopra — be it children or a super group with Mariah Carey — it's clear that the pair are having a great time living their lives, and hanging out with some of the biggest celebrities in the world.

More like this
Dan Levy Showed His Mariah Carey Devotion Yet Again With A “Honey” IG Story
By Grace Wehniainen
An Ultimate Guide To The Music Of 'Rap Sh!t'
By Brad Witter
How Lady Gaga & Adele Are Closer To The EGOT All Of A Sudden
By Jake Viswanath
Bridgerton’s Simone Ashley Stars In ODESZA's "Love Letter” Music Video
By Radhika Menon
Get Even More From Bustle — Sign Up For The Newsletter