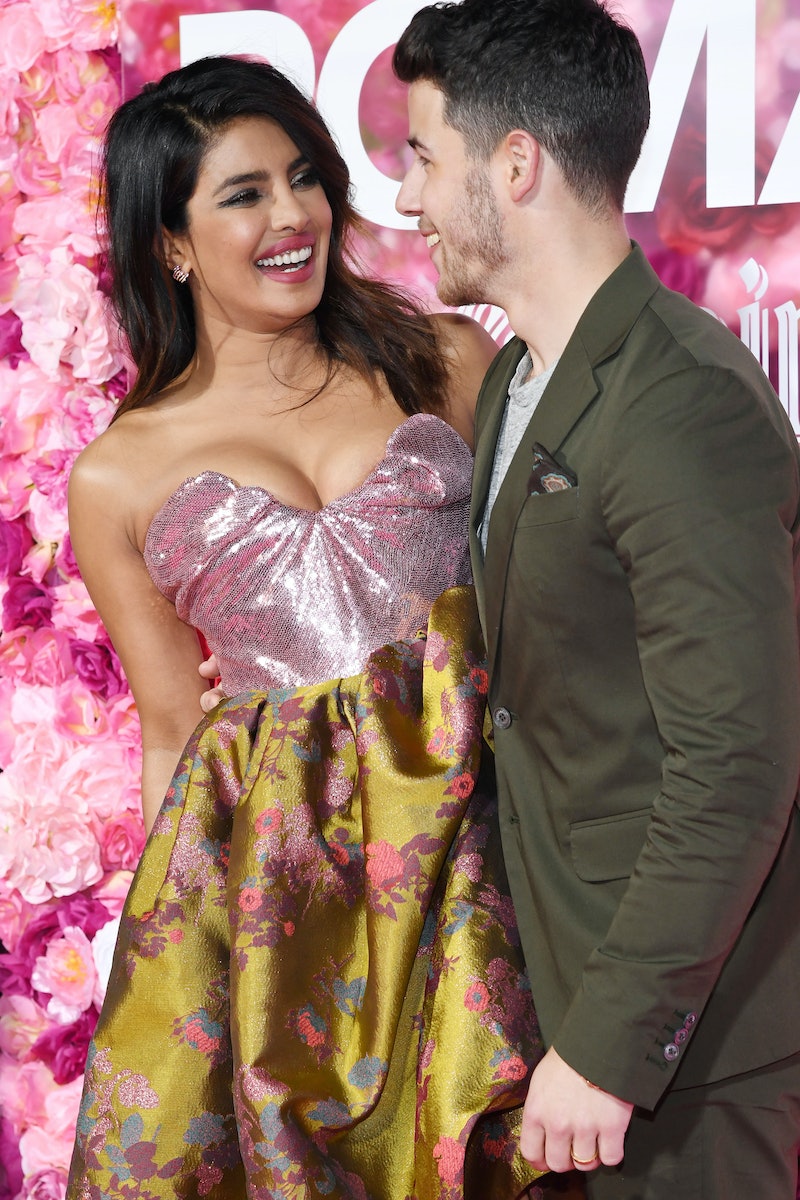 The Jonas brothers just had their first No. 1 single — and Priyanka Chopra is taking part in the celebration. Nick Jonas bought Chopra a new car to celebrate the band's success, and their photos with the Maybach are just too cute.

"When the hubby goes number one.. the wifey gets a @maybach!! Introducing.. Extra Chopra Jonas.. haha .. I love you baby!! Yaaay! Best husband ever.. @nickjonas 😍❤️💋"

Chopra's photos show her and Jonas toasting the new car and the No. 1 song, all while she holds her dog, Diana. To be fair, the adorable pup totally deserves to be in on all of the festivities — Diana was featured in the "Sucker" music video, too.

As Billboard reported Monday, "Sucker" debuted at No. 1 on the Billboard Hot 100. The song is the Jonas Brothers' first single since reuniting, and it's also their first No. 1 hit ever. So it makes sense that some major celebrations are in order for all of the band members and their partners. Chopra, along with Sophie Turner and Danielle Jonas, appeared in the "Sucker" music video, so the song's success really does include all of them.

Nick, Kevin, and Joe also tweeted about the No. 1 news on Monday. "This is unbelievable. My heart is so full of gratitude," Nick wrote. "There was a time I wasn't sure if I was ever going to be able to make music with my brothers again, let alone have a number 1 song on the Hot 100 on @billboard."

Joe also took the time to thank the JoBros' fans, as well as the people who'd worked on the albums with them. He tweeted,

"You guys are incredible. #1 debut on the @Billboard Hot 100?? Are you kidding me!? We are so grateful & love you guys so much. Thank you @republicrecords @ryantedder @frankdukes @philymack & everyone else on our amazing team. Can you believe this is only the beginning? #Sucker"

And yes, Joe was wearing a Jar Jar Binks mask and a Spider-Man mask in the video accompanying his tweet.

Like Joe, Kevin tweeted about his appreciation for the band's team and for their fans. "Can't thank you guys enough for all the love!! We're so incredibly grateful for you guys," Kevin wrote. "Thank you to @RepublicRecords @FrankDukes @RyanTedder @philymack and the rest of our incredible team! #1 Debut on the @Billboard Hot 100 LET'S GO!!! #Sucker"

Nick also shared a funny Instagram post about the news, featuring a photo of himself underneath a blanket printed with John Stamos' face, next to a pillow with Nick on it. (They have a whole prank war going on, with each of them printing each other's image on larger and larger items.)

With all of the Jonas brothers' partners making cameos in the "Sucker" video, it shows how much has changed since the trio's Disney Channel days. But that doesn't mean they're any less close. And the fan response to the video shows that the Jonas Brothers' music is more in-demand than ever.