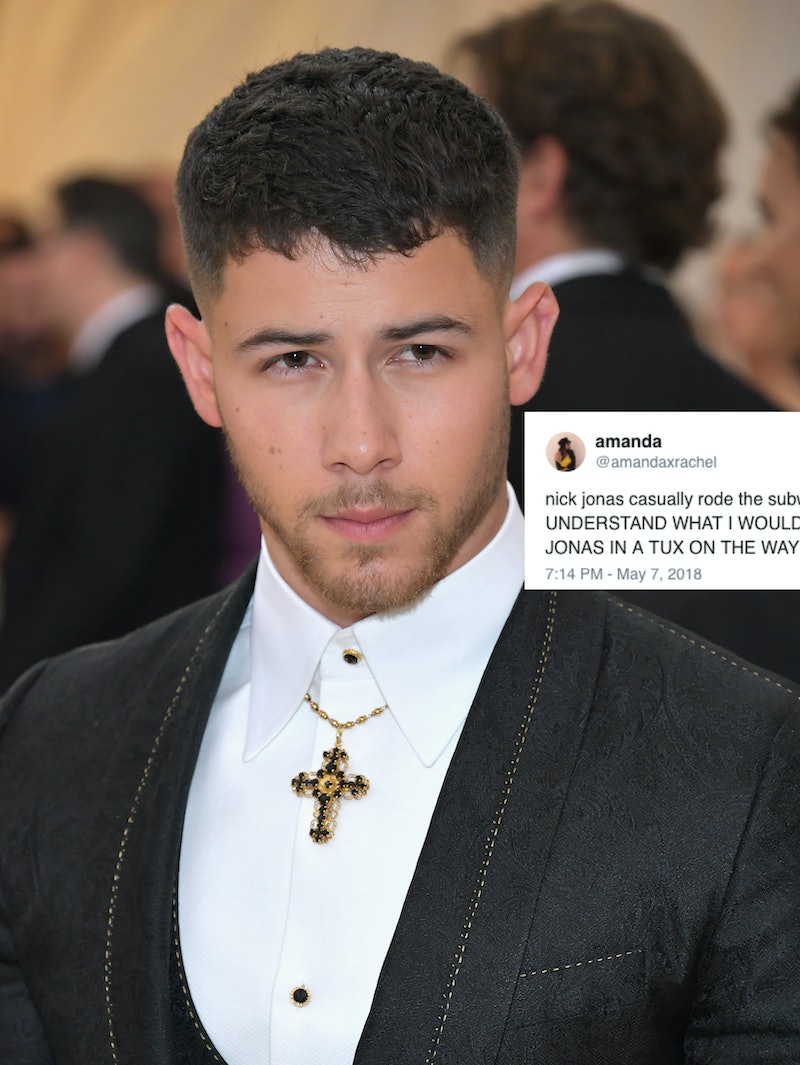 The first Monday in May is just like every other Monday for most New York City commuters. For celebrities and fashion designers, though, it's the night of the annual Met Gala. As the celebs start walking the steps up to the Metropolitan Museum of Art, the hustle and bustle of the city mostly remains underground as commuters return home from a long day at work. Nick Jonas decided to ride the subway to the Meg Gala this year, and he bridged the gap between commuters and couture in the best way possible.

As you can imagine, all of the bystanders to Jonas' stylish appearance completely freaked out — exactly as they should have — and honestly, more celebs should do that kind of thing just to brighten people's days and have a little fun themselves (not that riding on a hot crowded subway is always fun).

Jonas posted a photo of himself at the 68th St. train station, where he then took the train uptown to 77th St. and Lexington Ave. Granted, that means that Jonas only went one stop away on the train, but even with that short distance the train ride created quite the stir. It's not everyday that you see a person wearing custom Dolce & Gabbana on the train, after all.

In typical New Yorker fashion, the people standing on the platform around Jonas while he waited for the train didn't even notice the discreet star — they're busy looking at their phones. It wasn't until Jonas left the 77th St. station when fans actually noticed the star, and chaos ensued. One Twitter user, @amandaxvillegas, posted a video of a film crew following Jonas outside of the crowded station. In another video, you can hear the person filming gushing, "Oh my God," while she recorded the grand exit.

Since footage of Jonas going the pedestrian route immediately hit Twitter, fans were quick to react with the most hilarious tweets. Many responded by posting what their reactions would have been if they'd gotten a chance to see Jonas riding the subway like some commoner.

The real New Yorkers of Twitter were full of jokes about how taking the subway was a huge risk for Jonas, considering it's almost never on time.

Even though New Yorkers know that the subway certainly isn't the most glamorous — or dependable — mode of transportation, it still gave a new meaning to the phrase "thrill ride" for everyone who got to share a subway car with Jonas. And don't worry, even if he had to witness a few rats crawling on the tracks before his train came, Jonas made it to the Met Gala in one piece, and he even managed to show up looking perfectly calm, cool, and on-theme.

Even though Jonas most likely wasn't wearing his purity ring from the past, he still got into the 2018 Gala's theme, “Heavenly Bodies: Fashion and the Catholic Imagination." According to People, Jonas wore an Alta Sartoria tuxedo (Dolce & Gabbana's couture menswear), which included 24K gold thread and hand-top stitching. That very well could be the most stylish menswear to ever ride on a New York subway (don't fact-check that).

More subjectively, Jonas' subway ride to the 2018 Met Gala sums up the singer's charm. No matter how famous and fancy the third youngest Jo-Bro gets, he always stays humble and connected to his fans. The singer even admits, "I still get jealous," in one of his recent hits. Maybe his next song could be called "I Still Ride Public Transportation." Or at least he could make more subway appearances in the future — his fans would undoubtedly love that.