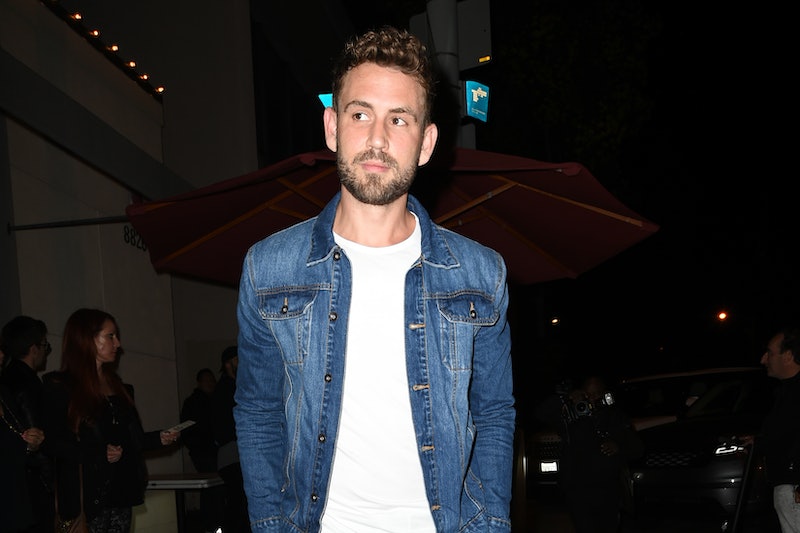 There always seems to be dating rumors swirling around Bachelor Nation. And in a recent interview with Us Weekly, Nick Viall denied dating Demi Burnett and Rachel Bilson. Speculations that he was seeing the former surfaced when he and Burnett were spotted holding hands at Demi Lovato's Halloween party, but Viall assured Us that nothing but friendship is going on between them.

“I’m not dating Demi,” he told the publication at the Vulture Festival in Los Angeles. Before Viall had the chance to contend, Burnett's best friend and latest Bachelorette Hannah Brown told Life & Style that the rumors were untrue. “Oh, no. They were just having a good time,” Brown said of their time at the costume party. Viall embodied Bachelor inception with his Pilot Pete costume, and Burnett dressed up as a Hooters girl. "They’re really good friends," Brown said. "They’re like besties. Well, she’s my bestie. We’re besties first and then Nick is her other best friend.”

Burnett shared an Instagram post that simultaneously showed off their costumes and complimented Viall's butt. "When Pilot Pete shows up a Hooter’s girl with a better booty," she captioned the post.

On Oct. 31, "with a heavy heart full of love," Burnett announced her split from ex-fianceé Kristian Haggerty. The pair got engaged on the latest season of Bachelor in Paradise. "We have decided it is best for us to take a step back from our relationship," she wrote on Instagram. "We ultimately want what is best for us in the long run and for us right now, that means being apart and growing individually." She added, "But we remain committed to encouraging each other, supporting each other and continuing forward in a way best for us."

It's unclear whether or not Burnett is looking to jump into another serious relationship right away, and Viall told Us that he isn't in a rush, either. “I’m certainly hoping to settle down when the right person comes,” he said. “I’m not trying to put pressure on myself.”

In the interview with Us, Viall also denied rumors that he's dating Hart of Dixie actress Rachel Bilson after she joined him on his podcast in July. Since then, per Us, the two have stayed flirty in each other's Instagram comments — mostly just complimenting each other's outfits.

On Saturday, Viall posted an on-the-street outfit pic under which both Burnett and Bilson left him semi-flirty, kind words. "Should’ve asked me for caption help. But you look handsome and ily," Burnett wrote. A few comments down, Bilson chimed in. "I see that you went with BOLD," she wrote. Naturally, fans of all three of them sounded off in the replies, begging them to date.

"we so want you two together!!" @serendipity4eva on Instagram told Burnett. @hannahluble replied to Bilson. "I ship it," she wrote. Despite how suggestive fans think their comments are, according to Viall, they're both his good friends.

More like this
The Bachelor’s Christina Mandrell Comes From One Of Country Music’s Most Famous Families
By Brad Witter
Hannah Ann Got Engaged 3 Years After 'The Bachelor' & The Proposal Was Dreamy
By Grace Wehniainen
Zach Reveals The Chaotic 30 Minutes That Were Cut From ‘The Bachelor’ Premiere
By Grace Wehniainen
A Guide To All Of Zach Shallcross' 'Bachelor' Filming Locations
By Brad Witter
Get Even More From Bustle — Sign Up For The Newsletter
From hair trends to relationship advice, our daily newsletter has everything you need to sound like a person who’s on TikTok, even if you aren’t.