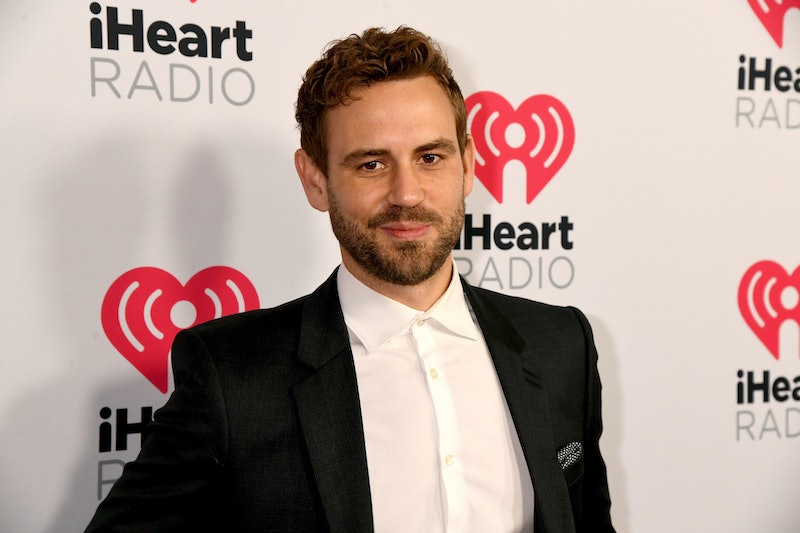 Just one week after posting a cozy Instagram photo that got Bachelor Nation talking, Nick Viall responded to rumors that he's dating Kelley Flanagan in the latest episode of his podcast Viall Files. The post that started it all featured Nick and Kelley posing together at the launch party for Chris Harrison's Seagram Tropical Rosé. The former Bachelor captioned it, "She's not with Peter." As one of the contestants on Peter Weber's season of The Bachelor, Kelley is one of Bachelor Nation's newest members.

Naturally, that cheeky caption combined with the duo's photo had Bachelor Nation speculating that Nick and Kelley could be a couple. Now, the Viall Files host has clarified that they're not together after all. "She's a nice person, she didn't disappoint in person, I thought she'd be cool in person," Nick said. "Everyone likes to think there's always something going on, and there's not."

It seems that Nick and Kelley met at the event — and the Season 21 Bachelor made it clear that he enjoyed meeting her. But he was also quick to point out that there's nothing romantic going on, despite the many positive comments his photo generated. Harrison himself wrote, "Loved seeing you guys get so cozy last night. Here for it." While Kelley's fellow Season 24 contestant Hannah Ann Sluss added, "Wow I'm kind of liking this." Even the former The Bachelorette and Bachelor in Paradise contestant Dean Unglert weighed in with, "OMG DATE."

Even though Nick and Kelley aren't dating, the response to their Instagram photo suggests that Bachelor Nation wants nothing but good things to come for the standout Season 24 contestant. Peter eliminated Kelley in part because she referred to their relationship as "fun," which he believed meant she wasn't serious about wanting to get married. Pilot Pete's stance frustrated fans who were tired of him leaning into the more dramatic aspects of the show. "Not every relationship has to be like, jumping through hurdles and super hard," Kelley told him at the time.

Kelley's response to her elimination was one of the more interesting parts of an uneven season. "I question his intentions because I just don't really know what phase he's at," she said after telling Peter goodbye. "[If] he's not able to sit there and make decisive decisions, then that's on him. I don't really want him to waste my time, either."

By advocating for herself and refusing to play up the drama, Kelley set herself apart in a season full of tears and quarrels. And even though she and Nick were just having fun when they shared that instantly unforgettable photo, it's nice to know that she got to meet a member of Bachelor Nation who appreciates her chill attitude as much as the fans did.