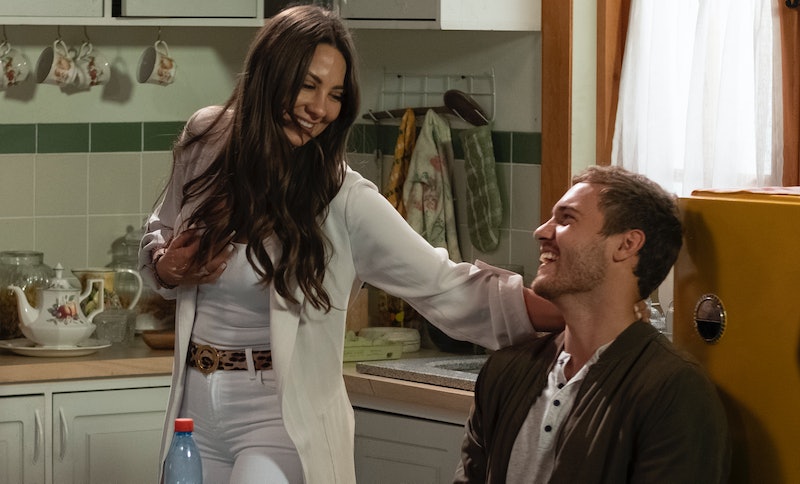 When Kelley walked into the mansion, it sounded like she was really excited about embarking on the Bachelor "journey." She even went as far as to call meeting Peter in a hotel lobby before signing her contract with ABC a "sign from god" that she was meant to be on the show. But after filming the Bachelor, Kelley seems to have lost her excitement and blind faith about the "process" if her social media activity is any indication. Actually, it's all just shady enough that it might be a big clue that things don't go accordingly for Kelley throughout the rest of the season.

Kelly's Instagram account doesn't show her hanging out with any of her fellow Bachelor contestants since the show wrapped (a stark contrast to someone like Sydney). But she has shown support through a Twitter like for one of the other women — Tammy. Kelley liked Tammy's tweet about how her "5 minute 'nasty' moment on TV" doesn't define her and that no one's mistakes define them, which is a sign that Kelley is well-aware of how the reality TV machine works.

She's not always on social media when the Bachelor airs since she posted on Instagram she couldn't watch the first episode of Week 5 live since she was at the Miami Heat basketball game with her family. But she is slowly getting more open with her likes on Twitter, which give some more insight into how she's feeling about the show.

For example, Kelley liked a particularly eyebrow-raising one: a tweet from Feb. 7 from Reality TV Universe that said, "If Peter had not been #TheBachelor, he and Kelley would be happily dating." Cosmopolitan previously shared how Kelley had liked tweets that weren't very flattering to Peter, but she has appeared to unlike them following the report.

Aside from these low-key ways of commenting on the show, most of Kelley's recent posts have highlighted her relationships with her friends pre-Bachelor and her family, so she seems to have gone back to life as normal since filming wrapped. (Or, she's secretly dating Peter and just can't tell the world yet, though that seems unlikely given how their relationship is progressing this season.) However, just because she's sticking to her pre-Bachelor routine doesn't mean that she's not close to trending every Monday night during the episodes.

In a season chock full of drama between the women, Kelley's no-nonsense and direct approach has been receiving praise from Bachelor Nation. If her recent Twitter activity is to be believed, Kelley appreciates people rallying behind her as she has been retweeting and liking the tweets that speak to her seemingly mature approach to the whole game. Bachelorette alum Jason Tartick, for example, tweeted that he loves how Kelley is always "just crushing her drink laughing at all the pitty [sic] nonsense."

What Kelley's social media actions mean for her future on The Bachelor remains a mystery. But besides clicking the heart or retweet buttons on Twitter every so often, she has been keeping herself juuuust out of the fray — as is to be expected from the most level-headed contestant this season.