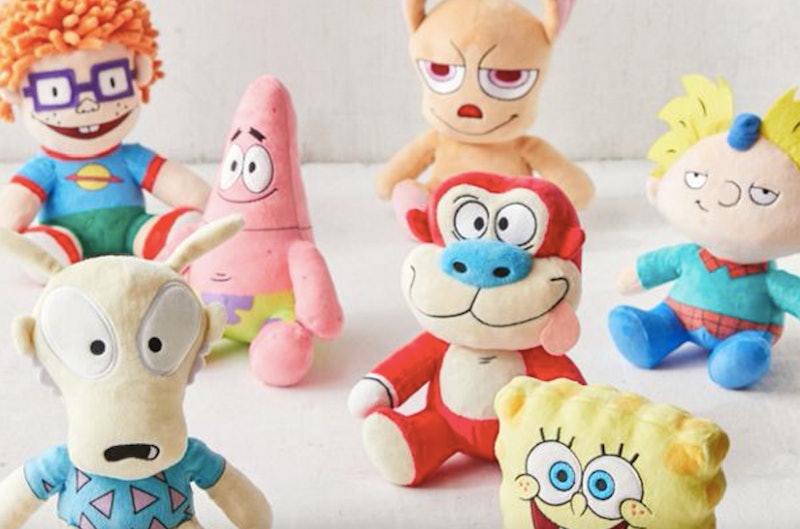 Late last year, '90s kids everywhere collectively mourned the loss of Stephen Hillenburg, the creator of SpongeBob Squarepants. When the news broke, longtime fans of Hillenburg's work reflected on the weird and wonderful cartoon that defined their childhoods. While SpongeBob continues to entertain a new generation of kids with its strange, and at times nonsensical, brand of humor, many other classic Nickelodeon shows are not much more than a distant memory. But, that doesn't mean you can't show off your love of some of the greatest TV ever created now that you can snag a classic Nickelodeon plushie from Urban Outfitters.

Nickelodeon, a cable TV channel devoted to children's programming, debuts back in the late 1970s. According to Brittanica, it originally showed educational programming, but really saw success with the debut of its original cartoons in the early '90s. Since then, the network has been a staple in the world of children's television.

For the most part, the cartoons that made Nickelodeon famous are a relic of the past. There are plenty of new shows that take their spots, but real one know the original Nickelodeon cartoons are irreplaceable works of art. Luckily, their images aren't all gone from present day. Think of it this way: plushes are a great way to embrace the cartoons that built you, or to get a new generation of kids interested in what is on TV. You can thank Urban Outfitters for these ones. Per the product description, the line is made up of "Your fave Nickelodeon pals rendered in plushie form. These stuffed characters are made from super-soft fleece evoking their cartoon likenesses to inspire a major nostalgic moment." I bet you can hear the theme songs now...

He usually lives in a pineapple under the sea, but now he can live in your bedroom. It should be noted this SpongeBob is not nearly absorbent or porous, but will deliver adequate nautical nonsense.

He's pink, goofy, and a little bit dumb. But, he's also one of the best sidekicks to ever grace the screens of children's television. Rock house not included.

Hey Arnold! was perhaps the darkest and most daring of all '90s cartoons. The program tackles issues as varied as economic struggles and family dysfunction. Plus, one time he and his grandmother broke a turtle out of an aquarium and set it free in the ocean. Pay homage to the one and only football head.

Chuckie Finster, the shy ginger two year-old with a persistent stuffy nose, is one of the most lovable characters that appeared in a '90s Nickelodeon show. You just wanted to reach through the TV and give him a hug, and now you can!

The '90s were a strange time for television. If you need any proof, look to further than Rocko, the Australian expat wallaby protagonist of Rocko's Modern Life. Remember, this show was for kids!

Ren and Stimpy was the perfect example of an adult program parading as one intended for kids. Ren, the hyperactive, volitile chihuahua is one half of the starring duo.

Stimpson J. Cat, the oafish blue-nosed feline makes up the other half of the Ren and Stimpy stars.

You can check out all of the '90s characters on Urban Outfitters to curate your own little nostalgic gang here!