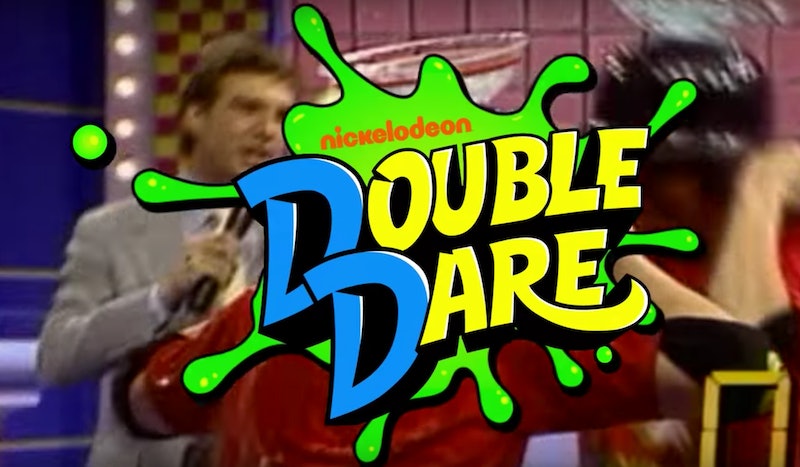 The newest nostalgic gem from your childhood to be revived is on its way to TV screens in just a few short months. According to The Hollywood Reporter, a Double Dare reboot is happening at Nickelodeon and will premiere in Summer 2018. The game show first premiered in 1986, and ran for a whopping seven years until 1993, during which time it made such an impression on viewers that now, three decades later, it's making its triumphant return.

And as if that news wasn't good enough already, there's more. This won't just be a one-off episode or a truncated season, just to get you hankering for more. Nope — Nickelodeon has ordered a whopping 40 new episodes for the reboot, and the network promises the perfect mix of old and new for the series. According to the press release, the show will "feature appearances from blasts from the past, longtime Double Dare fans and stars from today," to both scratch that nostalgia itch for you and also keep things current.

Plus, since the identities of the guests haven't yet been released, those longtime Double Dare fans could potentially be you. It's still extremely early in the process of this announcement, so all options are potentially open, and this reboot could mean all your wildest dreams coming true. Especially if you've been a longtime fan.

And who hasn't? The gameshow format of the program meant there was something for everyone to love. Whether you were partial to trivia, huge messes, physical feats of strength, or ridiculous obstacle courses, the original show had you covered. And from the sound of it, all those elements will be returning for round two. The press release promised original millennial audiences the "gameplay and challenges they remember," and specifically called out old favorites like "human hamster wheel; the classic gigantic mouth; the wringer; and the iconic Double Dare nose." Although seriously, who could forget the Double Dare nose? Certainly not anyone who's ever grabbed around in its gigantic, green-slimed nostrils.

There's no word on the fate of crowd pleasers like the Sundae Slide, Pie in Your Pants, or The Tank, but with 40 episodes on the docket, the show will be able to cover a lot of ground. No matter what, though, the show's gross stunts are legendary — it bills itself as the "messiest and most physically challenging competition" of your life — and they're sure to gain a whole new generation of disciples this time around.

Plus, if they want to really get into the vibe of the original, it won't be too hard, because they picked the perfect time. Nickelodeon is reviving several other blasts from the past at the moment that will make Double Dare seem right at home on the network. A Clarissa Explains It All reboot is supposedly in early talks, according to THR, with Melissa Joan Hart reportedly signed on to return and everything. It's also retooling Blue's Clues for a new release, and TMZ reported that original host Steve Burns wants back in, so there will be something for everyone in the new generation at the network. The preschool set who wants to solve a cartoon-y mystery, the tweens who need realistic advice, and those who just want to watch the world get covered in goop.

Double Dare fans fall into that last category, so strap on your solid-color uniform, your kneepads, and your helmet, and get to rooting around in your TV listings like it's a pile of cold baked beans and fake green snot. Surely the show you want is in there somewhere. Or, y'know, you could just wait until the summer and watch it sans-mess with the rest of the nation. It's really up to you.