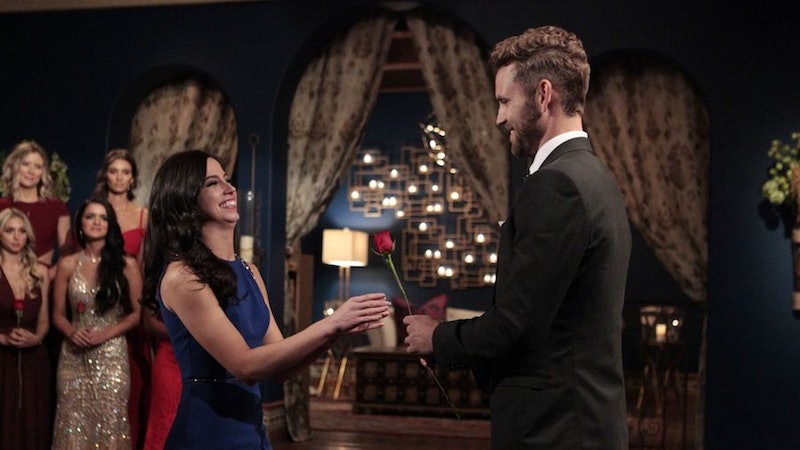 Nick Viall (sort of) made his fifth Bachelor franchise appearance this week on Bachelor in Paradise. There were a lot of comparisons between Nick and current contestant Luke Stone both from production and some cast members. One comment by Kristina Schulman bothered Nick. As a result, Nick responded by claiming Kristina contacted on his brother before she was a Bachelor contestant on his podcast. In response, Kristina posted a series of Instagram Stories on both of her Instagram accounts addressing many of Nick's claims.

There's a lot to unpack from the layers of this story. Let's start at the very beginning. Nick handed out roses on Season 21 of The Bachelor. Kristina made it to the top five and got eliminated just before the hometown dates. Aside from looking for closure at the Women Tell All taping, Kristina hadn't mentioned Nick on any of her subsequent Bachelor show appearances. Until this week.

The show poked fun at the similarities between Nick and Luke S many times throughout the Sept. 2 episode. Their resemblance was also addressed when Kristina went on a double date with Luke S. Kristina mentioned that she was the "queen of group dates" on Nick's season. This prompted Luke to ask, "Is it freaking you out right now? Do I look that much like him?"

She responded, "You kind of look like him a little bit. I think you're nicer, cuter too, and easier to talk to." And it was that last sentence that triggered the former Bachelor star. On the Sept. 4 episode of his podcast The Viall Files, Nick began his BIP recap with "Anyways, f*cking Kristina."

And then he dropped this claim: "I'm not surprised that Kristina had that to say. I probably wasn't easy to talk to on my season with Kristina since she decided to tell me that she slid into my brother Sam's DM's before our season of The Bachelor." Nick continued, "She said 'I slid into your brother's DM and I was talking to him a little bit.' I sensed prior to that she was just a die-hard Bachelor fan. So, it was honestly kind of awkward." Again, this would have made for some very interesting content during that season.

He added during the podcast, "If you tell me you hit on my brother on a date, I might not be the most conversational."

Kristina responded to Nick's podcast comments in a series of Instagram videos on Sept. 4. In the caption, she wrote, "Let's clear this up once and for all." And she addressed multiple issues that she has with her original Bachelor ex. She began, "Nick Viall, you don't know me. The person being portrayed on TV, you can't say with certainty that's who I am because you don't know me."

In the second part of her Instagram Story video, Kristina addressed his claim about her contact with his brother, Sam.. "Second, I was the one to tell you that your brother messaged me, not the other way around," Kristina clarified in the IG Story video.

Kristina's Instagram story video series concluded with "Where do you come from telling me I'm the terrible person."

At this moment, nothing else has been said. But perhaps one day Nick and Kristina can resolve these issues together in person.