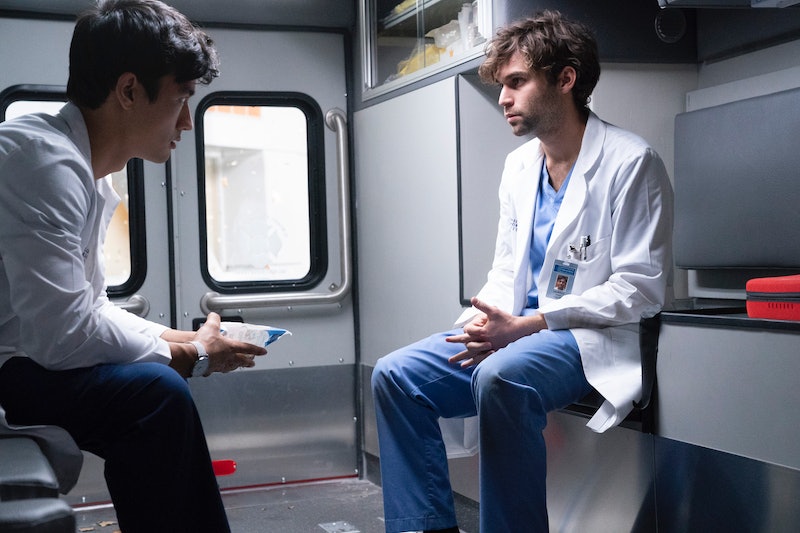 Just a few weeks ago, I was writing about how impressed I was by Levi and Nico's relationship on Grey's Anatomy. They were great at communication, choosing honesty over ignoring issues in their romance. But on this show, things can change overnight. After the April 18 episode, it may be time for Nico and Levi to break up on Grey's Anatomy. Frankly, Levi deserves better.

The most recent episode started with Levi and Nico arguing about Nico's job opportunities. Nico was considering taking a job in San Francisco and was not a.) factoring in Levi's feelings or b.) willing to talk about it. Things went from bad to worse later when Nico took his anger out on Levi after Nico lost a patient. Levi had calmly suggested that Nico reschedule his job interview to a less stressful day, and Nico refused. "You let failure hold you back your whole life," Nico snapped at Levi. "It’s basically your entire identity."

A stunned Levi left the room (slamming the door for good measure) but Nico didn't really seem that phased. He just went on with his interview, refusing to let his own failure hold him back. It's one thing to want to move on from a bad day in the OR. It's another thing to attack your boyfriend when none of this is his fault at all and he was just trying to help.

While Nico and Levi have had their cute, sweet moments, their relationship may have run its course. I still haven't totally gotten over Nico's initial rejection of Levi just because Levi hadn't been with a man before. For a relationship to start out like that doesn't necessarily bode well for it in the long run. It was only a matter of time, really, before Nico tried to push Levi away again. He started to do it at the beginning of Thursday's episode by applying to jobs out of state without really factoring Levi in, and he definitely did it at the end when he said failure was Levi's whole identity.

Now that Levi is more sure of himself and he knows who he is and what he wants out of life (and romance), it may be time for him to move on to someone else who is a little better suited for him. Nico can go have his dream job in San Fransisco, and Levi can find new love in Seattle.

This fight may have actually been Grey's Anatomy's way of writing off Nico's character because he was just cast in another show: Netflix's Insatiable. Now, it's possible for actors to be on two shows at once, but maybe Alex Landi (who plays Nico) didn't want that, or ABC or Netflix didn't either.

In any case, while losing Nico may sting at first for Levi, I have faith he can bounce back and find an even better romance now that he's kind of a new version of himself. Jake Borelli, who plays Levi, acknowledged that his character has gone through a personality transformation since coming out, and he's better off for it. "He has grown so much since Season 14. He’s a lot more confident and he trips far less often and fumbles over his words less and less," Borelli told Daman magazine. "I think a big part of this was the fact that he came out of the closet at the beginning of Season 15. He has finally been able to live a part of himself that he didn’t allow himself to live for such a long time."

With that renewed sense of self, Levi can bounce back from a breakup with Nico and eventually go on to find someone else who's a better match. Thank u, next.