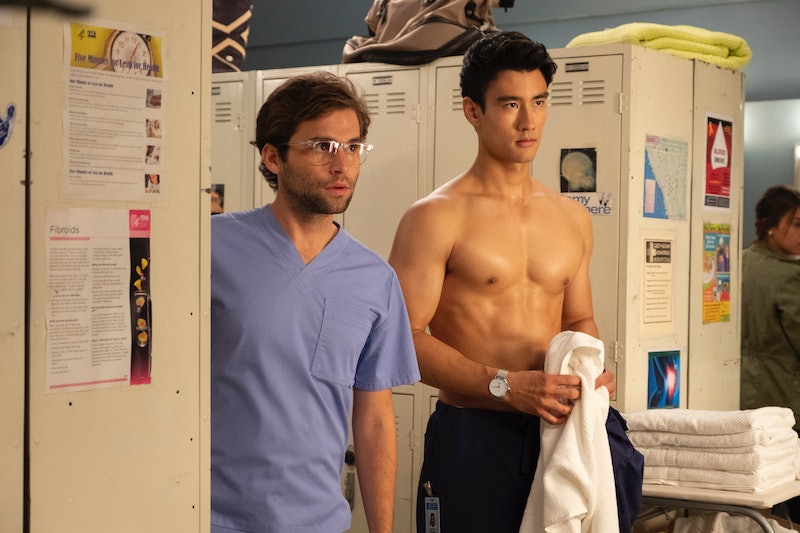 Grey's Anatomy is breaking new ground in Season 15 with its first gay romance between male doctors. The show's had a handful of bit-part patient stories to represent the men of the LGBTQ community, but Levi and Nico's Grey's Anatomy kiss was the first among main characters. However, shortly after the kiss that made Levi, still known as Glasses by some fans, rethink everything he thought he knew about his sexuality, Nico rejected him for being too inexperienced. The move really let the air out of the groundbreaking encounter a bit, especially since it's almost word for word how Arizona initially rejected Callie. But Jake Borelli, who plays Levi, still has high hopes for Levi's future and this storyline in general.

"There hasn’t even been that many episodes about this storyline yet and it’s already becoming a really huge thing," Borelli tells Bustle of the kiss' initial impact. "We started to get flooded with really supportive messages that said a lot about the fact that people were feeling seen by this storyline."

The supportive messages were coming because of both his portrayal of Levi and also Borelli's decision to publicly come out on Instagram after the episode. "As a gay guy myself, tonight's episode was so special to me," he wrote on his social media page.

"This is exactly the kind of story I craved as a young gay kid growing up in Ohio, and it blows my mind that I'm able to bring life to Dr. Levi Schmitt as he begins to grapple with his own sexuality this season on Grey’s Anatomy. His vulnerability and courage inspire me every day, and I hope he can do the same for you. To all of you who feel like little Levis out there, know that I do too, that you are seen, and that we're all in this together."

Borelli says that when he learned about this season's storyline, he "got so excited," even though he was also a little nervous to be a more vulnerable for his character.

But Borelli adds that he "instantly" knew he wanted to do it. "This was going to be bigger than me and this type of character and this type of relationship is something that really needs to be seen on television, so my anxiety quickly got replaced by excitement," he says.

And that's where Borelli stands today. He's excited to see Levi's journey play out and to get to portray him, even though Levi's hit this bump in the road with Nico's rejection.

"I’m just as excited to see all the new scripts as everybody is to sit down and watch the show, but I hope that [Levi] feels empowered by this and I hope that things work out for him," Borelli says. "I’m sure he’s going to come across some adversity, but I also know how resilient he is as a character."

You'd have to be resilient to come back from being all excited about starting to understand your sexuality only to be knocked down by another person from your community. In the episode, after Levi and Nico kiss, Levi admits that it was his first with a guy. Nico immediately shuts down. "If I would've known that, I would've never," Nico says. "Look, you're cute and nerdy and weird, and that's usually my type, but I've done my coming out already. I can't go through it again. I can't teach you how to do this."

It's similar to how, in Season 5, Arizona kissed Callie out of nowhere, but then spurned her advances when she learned that Callie had only dated one other woman. "You're all exploring and experimenting and yay! This is a really exciting time for you. But I work in [pediatrics]. l spend my entire day around newborns. So l try not to in my personal life," Arizona tells a crestfallen Callie. Ouch.

Eventually Arizona got over that, and she and Callie went on to get married (and later divorced), but her initial response so closely mirrors how Nico treated Levi 10 seasons later. As frustrating as it might be to see that type of rejection at all (let alone twice in the same series), Borelli thinks it's accurate to the LGBTQ community.

"No one is right and no one is wrong, and you see where everybody is coming from. I think that’s a beautiful thing to see."

"I think within the gay community, there are differences between people who are just coming out and people who have been out for a really long time and who have a better handle and grasp on who they are," he says. Borelli adds that while he, himself, has "felt comfortable helping people who were just sort of realizing who they are," he also understands where Nico is coming from.

"Sometimes someone is just not capable to be a mentor [at that moment], and that’s totally OK," Borelli says. "I think that’s where Nico Kim is at, and I personally, as Jake Borelli, don’t fault him for that. Everyone’s at a different place in their own coming out and own ability to offer or receive help." Both characters are right, so to speak, in their own truth. It's not Nico's job to teach Levi, just as it's not Levi's fault that he's understanding something about his sexuality later in life. This exploration of the story from both sides is something Borelli thinks the Grey's Anatomy does really well.

The series shows "a conflict or a relationship that has two very distinct sides that are both really developed and have a big current of substance beneath them," Borelli says. "No one is right and no one is wrong, and you see where everybody is coming from. I think that’s a beautiful thing to see."

Ultimately, when it comes to the LGBTQ presence on TV, it is important to represent all these real facets of the gay community. As a gay person, it can be troubling to think that people exist out there who won't date you if you're inexperienced. It's also hard to see it play out not once, but twice with the show's two major gay relationships. While LGBTQ representation on television and in movies is getting better, there's still a lot left to be desired, and seeing the same trope play out again and again can be frustrating.

But perhaps seeing it resolve on TV with Callie and Arizona's loving relationship and knowing the potential for Nico and Levi (they can't possibly be over yet, this is Grey's Anatomy) will open someone's mind in the gay community to be more accepting of all experience levels. After all, without media representation, these stories couldn't be seen or talked about at all.

That's why Borelli is ultimately so happy to be part of this story. It can reach so many people and help them feel seen and understood by a mainstream TV show. "I know that when I was younger, I definitely went towards media and television and books to find gay storylines that represented me," Borelli says. "I hope that this story can be that for someone who’s growing up right now or someone who is further along in their life who just needs a reminder that they are not alone."

And that no matter how people respond when you first come out, it doesn't devalue your personal journey at all.

More like this
'Grey's Anatomy's New Intern Got Advice From Dr. Bailey Herself
By Grace Wehniainen
Did 'Grey’s Anatomy' Just Drop A Major Taylor Swift Easter Egg?
By Grace Wehniainen
Pro Footballer Zander Murray Is "Blown Away" By Support After Coming Out
By Sam Ramsden
The 19 Best Tweets & Memes About Bisexual Awareness Week
By Lexi Inks
Get Even More From Bustle — Sign Up For The Newsletter