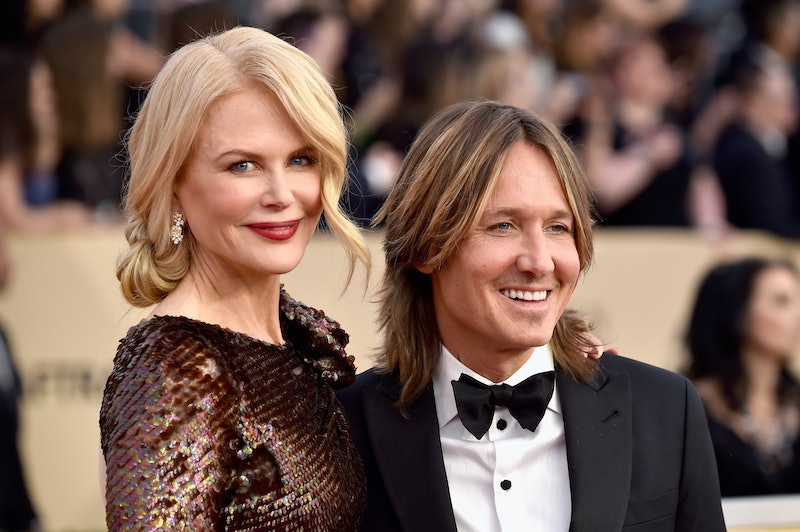 13 might be considered an unlucky number by some, but for one Hollywood couple, it represents nothing but "pure love." On Tuesday, June 25, Nicole Kidman and Keith Urban celebrated their 13th anniversary with a pair of intimate photos that show that these two are just as in love with each other as they were when they first tied the knot.

The country star shared his anniversary message first, captioning a candid snap of Urban and Kidman smiling and embracing on a beach with a gushing message to his wife. “Thirteen years of magic, music, romance, wild adventures, and the ongoing discovery of pure love," Urban wrote. "Happy Anniversary Babygirl. xxxx – KU‬." Shortly afterwards, Kidman shared a shorter — but equally touching — anniversary post of her own, alongside a black and white photo of Urban kissing her forehead. "...love" the Big Little Lies star wrote, along with a red heart emoji. "Happy Anniversary Baby."

According to People, Kidman and Urban tied the knot in Australia back in 2006, about a year after they met at an event, and they welcomed daughters Sunday Rose and Faith Margaret in 2009 and 2011, respectively. "[It's] extremely simple with what we want from each other and what we want from a relationship. Just peas in a pod in that regard," Kidman told Vanity Fair in April about the secret to their long-lasting romance.

Kidman also described herself as a "tour wife," while speaking with the magazine, before adding that seeing Urban's talent and dedication to his music makes her fall more in love with him every day. "I love that Keith is a guitar player and a singer, but his passion is guitar and writing music," she said. "That’s what I’m around every day."

In January, Kidman recalled the moment that she knew Urban was "the love of my life," explaining that the country singer officially won her over when he surprised her with a birthday getaway to Woodstock, N.Y. "It was my [38th] birthday, and he stood outside with gardenias at 5 a.m. on my stoop in New York," she told People at the time. "That is when I went, 'This is the man I hope I get to marry.'"

"It was pretty intense," the Oscar winner continued. "I believed by that point he was the love of my life. Maybe that’s because I am deeply romantic, or I’m an actress, or I have strong faith as well, but I just believed, 'Oh, okay, here he is.'" Urban has been equally effusive about Kidman, telling CBS' Sunday Morning that it was love at first sight for him. "Meeting her and getting married wasn't life-changing, it was life-beginning," he recalled in May 2016. "It was literally, like, 'Okay, life starts.'"

Kidman has also been open about the fact that Urban has encouraged her to embrace different, grittier projects and follow her passion as both an actor and producer. "I’ve done weird films and I’ve done things that are so obtuse, which I’m still committed to because I like performance art and not conforming to what everyone expects of you," she told VF. "I don’t think in normal terms. Keith always says, ‘You’re so not mainstream.'"

The couple are so in love and supportive of one another that in 2015, Urban famously flew to the London premiere of Kidman's film, Photograph 51, despite being in the middle of a U.S. tour at the time. "I said, 'It's too much for you to have to fly all the way back, don't worry,' and he said, 'I'm flying,'" Kidman told People about her husband's grand romantic gesture. "He flew 10 hours to come and be with me for the night, and then he flew back and did a gig. That for me is love in action. That's extraordinary. But I would do the same for him and that's what we've committed to as a couple."

With that much affection and care for one another still evident, it's no wonder that these two are celebrating 13 years of "pure love" — and, we're sure, plenty more to come in the future.