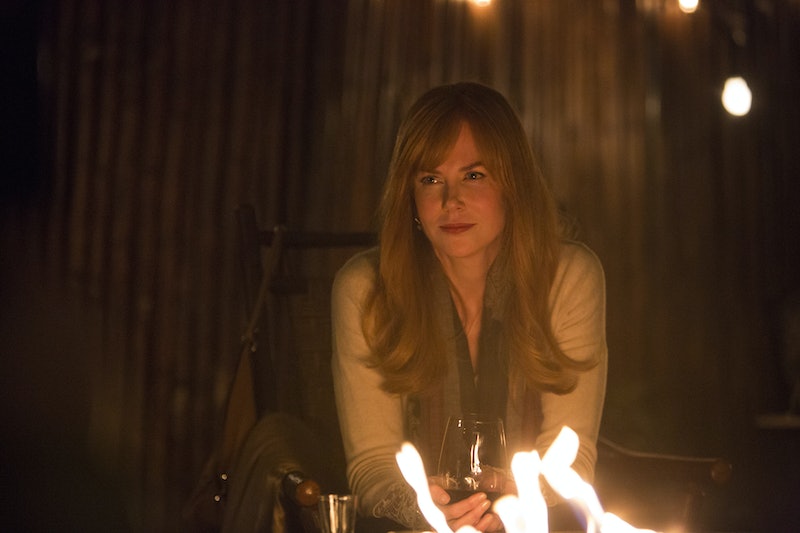 You're not the only one hoping that Big Little Lies gets a second season. Apparently Nicole Kidman would also like to see the HBO show come back for another season, but on one condition. In an interview withVariety, Kidman said she would return for Big Little Lies Season 2 if the "storyline could be powerful and compelling. If there is a way to form these women’s lives further, that’s really interesting. It would be so lovely if we could do it." Kidman doesn't want to bring back the popular show just because it was popular. She only wants to bring it back if it will be as powerful as the first season.

Kidman told Variety that, throughout the initial run of Big Little Lies, she realized the "power of television, the power of that particular story and how it connected" because she had fans letting her know how much the show meant to them. "It was glorious, actually," Kidman said. "While it was on, the way people were coming up, saying: 'What happens next?' They were obsessed. It was beautiful. I was very much part of people’s lives." Mainly, because it reminded people of their own lives and the lives of those women who rarely get to tell their stories on TV.

Through this television role, Kidman put a spotlight on domestic abuse as Celeste, a woman who appeared to have it all, but was trapped in a marriage that was hazardous to her health. There are scenes between Celeste and her on-screen husband Perry (Alexander Skarsgård) that are tough to watch because they're so real, not to mention brutal. Kidman told Ellen DeGeneres she actually got hurt during some of the filming, but she wasn't interested in holding back because she "felt a sense of duty that I wanted to give truth to such a complicated story."

After Big Little Lies, Kidman said people have been reaching out to tell her how much Celeste's story meant to them. "I got so many emails and people talking to me about it, which I like because it’s a really complicated relationship," Kidman told Variety. "I obviously understand it, so I’m able to talk about it in complex detail. It’s so based in shame, and the desire to protect her husband and family."

It's why it makes sense that Kidman wants to protect this character. She doesn't want to do another season of Big Little Lies if it doesn't serve Celeste's story, because Celeste's story has seemed to served so many others. But, she knows that a good script, which allows fans of the show to see what happens next in Celeste's life now that her husband is gone, could be as powerful to those who have dealt with the same situation.

By the end of the series, it was clear that Celeste wasn't a victim, but a survivor. Getting a chance to watch her take that next step in her life would be fitting. Celeste's husband may be gone, but that doesn't mean he won't cast a shadow over her life, which could make for an interesting follow-up that rarely gets the TV treatment. That's often where the on-screen story ends — with a woman being able to leave her abuser, a happy ending in theory, but there's so much more that happens. Being that Big Little Lies ends rather ambiguously and unlike the original book by Liane Moriarty (which is more cut and dry), the show's creators seemed to understand that this story wasn't over, even if the miniseries was.

The final shot of the Big Little Lies finale shows Celeste on the beach, attempting to move on with her life alongside the women who know what happened that night. As of now, the cops are questioning whether Perry's death was an accident. (In the book, Bonnie admits to pushing Perry.) This gives a logical premise for a new season focused on the investigation, but that alone doesn't make a second season worth it. What Kidman seems to understand is that people connected to this show because it was something they had never seen before. Not just an all star all-female cast, but a show that put the focus on women's stories, specifically the ones that play out in private and don't always get the attention they deserve.

It's why Kidman's stipulation for agreeing to a second season of Big Little Lies is a logical one. She doesn't want another season to be a ratings grab, because that could tarnish a show that meant so much to its audience. Instead, she wants Big Little Lies Season 2 to be another chance to continue telling important female stories. The truth is, that's what all of us should expect from the shows we love.

More like this
The Grey's Anatomy Season 18 Finale Finally Revealed If Japril Got Back Together
By Brad Witter
Two Iconic ‘00s Doctor Who Stars Are Returning To The Series
By Shahed Ezaydi
'Who Killed Sara?' Won’t Return For Season 4
By Brad Witter
Everything To Know About 'Grey's Anatomy' Season 19
By Brad Witter
Get Even More From Bustle — Sign Up For The Newsletter