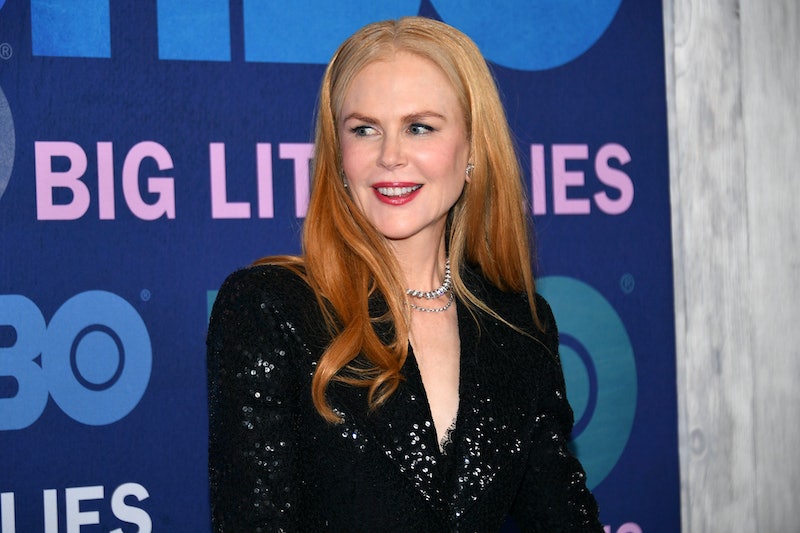 Dogs are great, right? While my dog just forced me to give him a bath after getting covered in poop, Nicole Kidman's new puppy just became a hit on Instagram and has won praise from the likes of Isla Fisher. Stars, they're just like us!

On Wednesday, July 10, Kidman posted a photo of herself with her new dog, which is a cuddly little curly-haired thing. (Perhaps a labradoodle, or some other type of doodle, but the actor did not share that information.) While the photo is sweet, it's the caption that really makes it. "My first puppy," Kidman wrote, "actually my first dog. Been waiting my whole life for this!"

This caption has everything: Joy about a dog. A message about it never being too late to achieve your dreams. Reassurance to parents that it's cool if they don't get their kids a dog now, because they can totally just get a dog themselves when they're 52 years old and have been nominated for four Academy Awards, winning one in 2003 for their starring role in The Hours.

So far, Kidman's dog Instagram has for 300,000 likes, and has earned high praise such as, "So cute!" from Fisher, "SUPER CUTE!!!" from Kimberly Williams-Paisley, "I don't know if I'm happier for Nicole Kidman getting a dog or for the dog that's getting a Nicole Kidman" from another commenter, and a number of passive aggressive comments from people hoping it's a rescue. (To be clear, it would be great if the dog is a rescue, the point here is that these particular comments are really a masterclass in being passive aggressive on Instagram. Take a scroll through, if you please.)

Kidman has not shared any further pictures of the dog yet, nor its name, nor its favorite toy, nor what it thinks about this season of Big Little Lies. Come on, Nicole! Give us the deets!

Speaking of, the actor is not the only BLL star to recently get a puppy. In June, Reese Witherspoon welcomed a bulldog named Lou into her family. Like Kidman's dog, Lou also received praise from celeb fans, including Shailene Woodley, Kate Hudson, Eva Longoria, and Jennifer Garner. Lou joined Witherspoon's other dogs, Pepper and Hank, and, sadly, came a few months after her other dog, Nash, passed away.

While Kidman did not have a dog before this one, its not her first pet. She has two cats, Ginger and Snow, who she has posted plenty of videos and pictures of on Instagram. (She even once wrote of herself, "I've always been a cat girl." Gasp!) Kidman also owns alpacas. In her 2015 "73 Questions" video for Vogue, she said that she had six alpacas at her Australian home, and she had previously told Conan O'Brien in 2010 that she had alpacas on her farm in Nashville. In her conversation with O'Brien, she said, "I always wanted a mix of weird animals and stuff like that, but the weirdest we've got is an alpaca." She added, "I'd love to get some snakes. I love snakes."

And now, she has pretty much the least "weird" animal you can get. Hope the new pup gets along with cats and alpacas!

More like this
19 Instagram Captions For Celebrating Black History Month
By Ayana Lage
Picky Eater? Sensitive Stomach? This Vet Nutritionist-Designed Dog Food Has A Plan For That
By Maria Cassano
Dolly Parton Released 4 New Baking Mixes With Duncan Hines
By Alexis Morillo
Dog Trainers Say These 30 Cheap Things On Amazon Are Pure Genius
By Allison Bolt
Get Even More From Bustle — Sign Up For The Newsletter
From hair trends to relationship advice, our daily newsletter has everything you need to sound like a person who’s on TikTok, even if you aren’t.