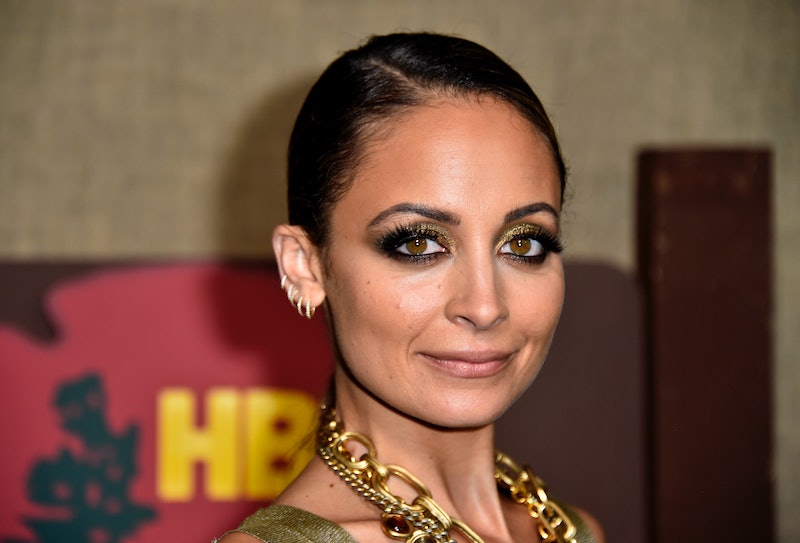 Fans who've seen Peele's newest horror movie probably noticed the Hands Across America imagery at the beginning of the movie. But viewers might not know that Nicole Richie has an Us connection, and the actor made the best joke about it in an Instagram post about the movie. Spoilers ahead for Jordan Peele's Us.

"#TBT to my, and my Tethers first television appearance #HandsAcrossAmerica @usmovie," Richie captioned her Instagram post. She shared a video from a 1986 Hands Across America commercial, which featured her and other children singing the "Hands Across America" song. Richie, who would have been about 4 at the time of the commercial shoot, isn't in Us, but there is a scene where the young Adelaide watches a commercial for the 1986 charity event, so one could say that the former reality-star almost has a cameo in the film.

As Vanity Fair explained, Hands Across America was an event that encouraged people to hold hands across the country on May 25, 1986, in an effort to raise money to fight homelessness. The event worked, to some extent, as the magazine pointed out, with almost five million people, including President Reagan, joining hands with each other. But the event cost somewhere between $14 million and $16 million to execute, and it only raised $15 million in donations, Vanity Fair reported. Despite all of the advertising (and the song), it was hardly a victory in terms of actual charitable fundraising.

Back to Us, though: Peele used the event and the hand-holding imagery to chilling effect in the movie. The Tethered hold hands with each other in the film, and Richie shared a still featuring the characters doing just that in her Instagram post.

Peele has talked about why he chose to use the Hands Across America imagery during various interviews, as well. He told Vanity Fair,

"Hands Across America was this idea of American optimism and hope, and Ronald Reagan-style-we-can-get-things-done-if-we-just-hold-hands. It's a great gesture — but you can't actually cure hunger and all that."

Actions speak louder than words, and the charity event's failure to raise a net profit for charity illustrates that point. "It made us feel like we had accomplished something. And we could go on about our '80s lives," Peele said to Uproxx in a separate interview, adding that he reconsidered the event after seeing a Hands Across America commercial on YouTube. "It took me down this path to really think about this movie in terms of this country and the idea of demonstration or protest, or even performance art, and to imagine what the evil doubleganger version of what Hands Across America would be."

With the Us connection in mind, the Hands Across America promo seems a lot creepier than it might have when it first aired more than 30 years ago. And the comments on Richie's Instagram post hint at the commercial's newfound creepiness. Both fans and fellow celebrities chimed in, and it sounds like people won't think of the charity event, or its promotions, the same way again. "No ma'am," Jennifer Garner commented on Richie's post. Jessica Seinfeld, meanwhile, commented with the coffin emoji.

It looks like Peele was far from the only person who found the Hands Across America imagery more than a little strange. In a twisted way, it was perfect for the horror movie. And even Richie seems to be on board with the dark take on the vintage commercial.