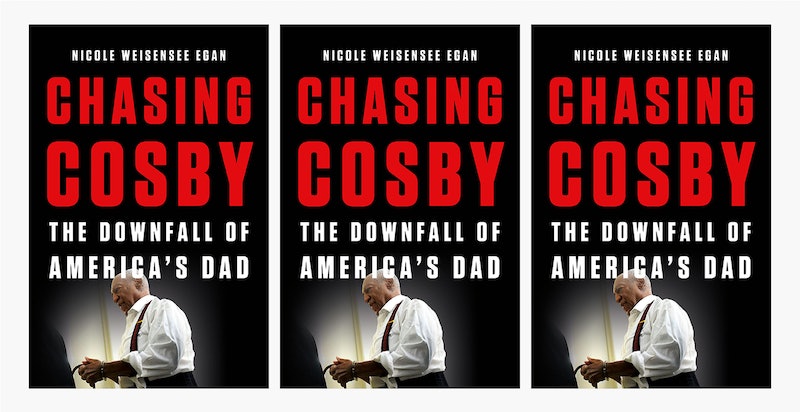 Nicole Weisensee Egan first encountered Bill Cosby like most others—through his roles as Dr. Cliff Huxtable and Fat Albert in television shows she adored. As a senior in high school, Egan lost her older brother; that same year, The Cosby Show premiered. Watching the show growing up, Egan felt an emotional connection to the happy-ending plot lines woven throughout the series. They served as an escape from her own feelings of grief. “I thought it was somewhat based on his life, his family. There was always a happy resolution. So yeah, that’s who I thought he was,” she says.

In the end, of course, Egan discovered just how vastly the real-life Cosby differed from his beloved TV counterpart, as she expertly details in her debut book Chasing Cosby: The Downfall of America’s Dad, published by Seal Press this year. Following her journey as an investigative reporter covering the allegations of sexual assault against Cosby, the book showcases Egan’s journalistic expertise and her dedication to uncovering the truth. Though she first started reporting on Cosby in 2005 while working at the Philadelphia Daily News, Egan continued to cover the story for nearly 15 years as her career took her to People magazine and beyond.

Back in 2005, covering Cosby was an isolating beat. Egan first learned about the allegations made against Cosby by former Temple University employee Andrea Constand when an investigative reporter for Philadelphia’s Channel 10 reported them on the five o’clock news. Seeing that news report, Egan’s editor at the Daily News quickly assigned her the story. Previous experience had taught her that getting information could be tough in Philadelphia’s old-school journalism environment. Persistence was key, and something she’d seen the fruits of firsthand when she worked with the Pulitzer Prize-winning reporters who’d just uncovered the Catholic Church abuse scandal during a post-college internship at the Boston Globe’s Washington bureau. “I learned to just stick with it from day one—especially these big stories. And I’ve always kind of been like that.”

Her beat in Philadelphia included reporting on crime, police misconduct, and sexual assault cases in the city’s nightclubs, and this experience came in handy when confronted with the Cosby allegations. “When this story broke I was like, oh my god, not the Cos,” she says. But Egan quickly realized the report was credible. “My boss would always put me on the big crime story of the day and I was covering sexual misconduct in the police department, so I’d sort of seen that pattern,” she adds, noting the way abusers often choose victims with less power than them. Constand also proved herself to be a trustworthy source for Egan’s reporting. “I had sources at Temple and I knew enough about her. She was intelligent, driven, she had a really good reputation … It became very clear to me that she was a credible person.” Constand’s bravery led Tamara Green to come forward with a story of her own, and Green and Egan went on cable news to talk about the story. “These prime-time cable news programs were the only way to get the message spread nationwide,” Egan writes in Chasing Cosby. But then came the backlash.

Cosby’s people challenged her — she writes that Cosby’s attorney threatened to sue the newspaper and frequently called her, angry about the coverage — but that was to be expected. It was criticism of her coverage from fellow media outlets that surprised and troubled her most. “It was the worst experience of my career,” she says. “To this day it is. It was just disillusioning. But my paper wasn’t that type of paper [to back down] — they would never back off a person because they were powerful.”

Though there were thirteen other accusers at the time, the coverage on Cosby mostly died down after Constand’s civil suit against him was settled. Egan moved on to People, which wasn’t an easy decision. “I worried I’d miss investigative journalism if I left, but after months of tangling with Cosby’s emissaries, I was feeling pretty bruised and battered, and a change of pace seemed like a good idea,” she writes. She published a piece in 2006 for People about the Cosby accusers, and moved on to other stories.

But it wouldn’t be the end of Egan’s reporting on Cosby. In 2014, comedian Hannibal Buress included a bit about the allegations against Cosby in his stand-up act at a theater in Philadelphia. Philadelphia magazine editor Dan McQuade recorded the segment on his phone and published a piece with the video the following day, and the story was thrust back into the public eye. From there, coverage quickly grew, and the story was picked up by the likes of Buzzfeed, Gawker, and others. It wasn’t going away this time.

Egan, working at People, says she couldn’t help but question why the story hadn’t gone viral in the first place. “I was like, ‘God, it’s like deja vu. I reported all of this,’” she says. “But my thing was like, 'hey, you’re not going to just come in here and be on my story.' I was very determined to stay in it and keep covering it no matter what.” After the story found continued media coverage, Egan continued her own reporting, eventually breaking the news that Cosby was going to be arrested.

The story in many ways provides an acute insight into the way media distribution has changed. “Cosby could control the media in 2005, but he could not control social media,” Egan says of the change. As the New York Times reported in 2014, Cosby admitted under oath in 2005 that he had traded an exclusive interview with the National Enquirer to prevent them reporting on allegations made by Beth Ferrier that he had drugged and sexually assaulted her in the 1980s. He couldn’t play the same game in the 2010s. The virality of social media was now part of the equation, and trading exclusive interviews couldn’t dampen awareness.

Ultimately, there would be more than 60 accusers who came forward. “In 2005 there were, like, 14 women total,” Egan says of how the story grew. “I expected it would be like what happened with Epstein or Weinstein — it’s this big explosion and then more people come forward. You know, where there’s smoke there’s fire.” Cosby was convicted of three counts of sexual assault in 2018. He’s currently serving three to 10 years in a Montgomery County prison in Pennsylvania.

Though the Cosby story got much more media attention after 2014, in Egan’s view, there have still been challenges with coverage. “It’s easy for people to believe Harvey Weinstein or Jeffrey Epstein could do these horrible things because they don’t know them. But with Cosby, they feel like they know him,” says Egan. “Plus with sexual assault cases, the skepticism is still bad.”

Chasing Cosby earned praise from The Washington Post, The London Sunday Times and others, but despite the book’s success, Egan isn’t slowing down: She’s already writing her second book, a co-authored nonfiction work titled Victim F: The Story of the So-Called Real Life ‘Gone Girl’. The book is set to be published by Penguin Random House/Berkley and is tentatively slated for release in 2020. When asked what she thinks she’ll do next, Egan says she’s focused on the long book editing process for Victim F. Surely, as with Chasing Cosby, the book will reflect the author’s dedication to laying out the truth.

More like this
This First Look At 'The Gold' Shows Jack Lowden In A Whole New Light
By El Hunt and Sam Ramsden
Rachel Nickell’s Son Wants The Police To Take Accountability Over Errors
By El Hunt
A New Netflix Doc Will Explore The Unsolved Murder Of Jill Dando
By Sam Ramsden
'Brookside' Is Coming Back & Soap Opera Fans Are Going Wild
By Sam Ramsden
Get The Very Best Of Bustle/UK
Sign up for Bustle UK's twice-weekly newsletter, featuring the latest must-watch TV, moving personal stories, and expert advice on the hottest viral buys.