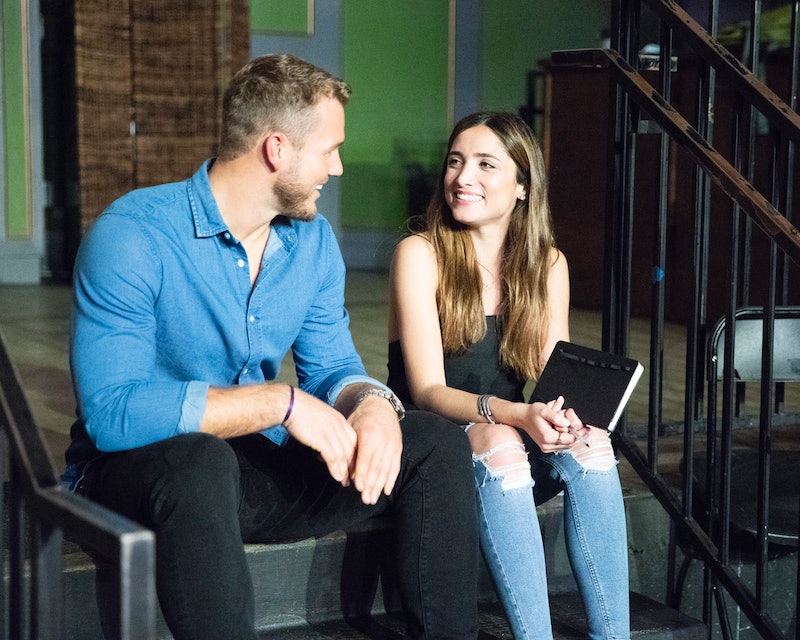 It's plain to see that Colton Underwood is already starting to develop serious feelings for a few of his Bachelor contestants. And while some women have received more camera time than others, Bachelor contestant Nicole's Instagram reveals a side of her that has yet to be fully explored on the show. Not only do her posts indicate that she's extremely relatable and good natured, but it also proves she has a fun talent Colton may not be aware of. Her caption game is very on point and is many times full of some pretty creative puns that only seem to make her all the more lovable.

Nicole has remained on Colton's radar for most of the season, though she has yet to receive the always coveted one-on-one date card. But if she is able to get some alone time with Colton, hopefully he'll get to see the many facets of her wonderful personality. Not only do they both share a love of dogs (Nicole has two dogs and a cockatoo named Popeye), but they also are very family oriented, making them a potentially perfect match. And if her Instagram captions are any indication, she's also actually a lot of fun to be around and doesn't take herself too seriously.

Nicole is one of the select few remaining contestants who has yet to get roped into any drama within the Bachelor mansion. She's never been the target of anyone's wrath, nor has she tried to sabotage or stir the pot in any way. That right there says a lot about the type of person she is in real life, which is something Colton is sure to take note of as more and more drama gets brought to his attention. (The promos are constantly teasing that Colton will jump over a fence at some point, but it's safe to say that Nicole won't be the cause of that decision.)

Some social media accounts can be misleading and not give anyone a real sense of who this person is, but Nicole's seems pretty genuine and true to her joys and passions. She just feels like the type of person you want to be best friends with in real life. (When you make a solid cheese pun, you basically can do no wrong.)

At this point in time it's difficult to say whether or not she ends up receiving that final rose from Colton, but here's hoping she is able to stick around long enough to really demonstrate to him (and Bachelor Nation) why she deserves to remain a staple in the franchise, regardless of whether or not it results in a proposal. Likability is key when it comes to continuing on after your respective season is over, but she definitely has what it takes to be on the next season of Bachelor in Paradise or perhaps even the next Bachelorette herself.

Anything is possible right now, but if Colton is smart he'll be keeping this one around for quite some time.