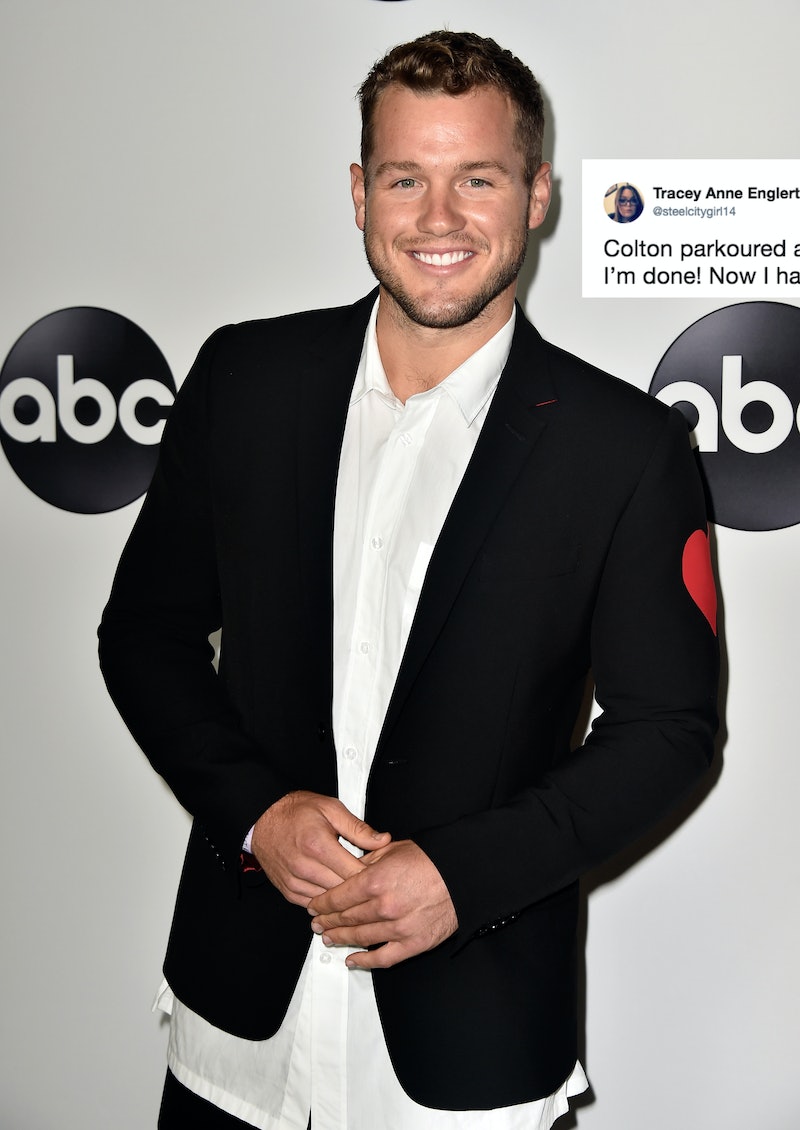 When ABC announced that Colton Underwood would be the next Bachelor earlier this year, fans had a lot of mixed feelings. But now that the network has given us the first glimpse into his season, it looks like some of those feelings are changing. On Monday, Colton's first Bachelor promo debuted, and although it was packed with drama, there was one moment that really stood out: Colton jumping over a fence.

And it wasn't just a casual fence jump, either; it's not like he was playfully trying to take a short cut — at least, not according to the footage in the promo, anyway. In that part of the teaser, Colton's standing in a street and saying, "I'm f*cking done," and then the camera goes to Chris Harrison, who says, "Holy sh*t."

Then, the next thing you see? Colton ignoring Chris calling his name and going right over a fence, as the women who are looking on scream.

Given The Bachelor's history of being a bit deceptive in their trailers, it's hard to know exactly what was going on in this scene. It might be just as dramatic as it looks, or it might be nothing how it looks — we'll just have to wait until the season premieres in 2019 to find out.

No matter what's actually going on in that part of the promo, seeing Colton jump over a fence sent so many fans straight to Twitter to admit that finding out what happens has officially redeemed the season for them, even if they weren't planning to watch Colton in the lead — and it sounds like a lot of fans are here for that drama.

A lot of other people were impressed with the fact that Colton could jump over a fence at all, because let's be real — he did manage to get over it with what looked like little to no effort. Then again, he is an athlete.

Even fellow Bachelor Nation member Evan Bass was impressed, saying that Colton's flawless jump is the main reason he's watching this season, aside from the fact that he met his wife and now has a daughter because of the Bachelor franchise:

Another fan pointed out that the fence scene looked like it was straight out of a horror movie, which is true:

And this one pointed out that it made up for Jason or Blake not being the next Bachelor:

And others are simply ready for the drama:

Colton himself has even responded to the fence moment. Late Monday night, he shared a screenshot of himself halfway over the fence on Instagram, with the caption, "Bachelor Nation jumping to conclusions like."

It's hard to say whether or not this fence scene will end up being a major part of the season, but now, it seems like it's enough to make a lot of fans want to watch and find out. Is it January yet?