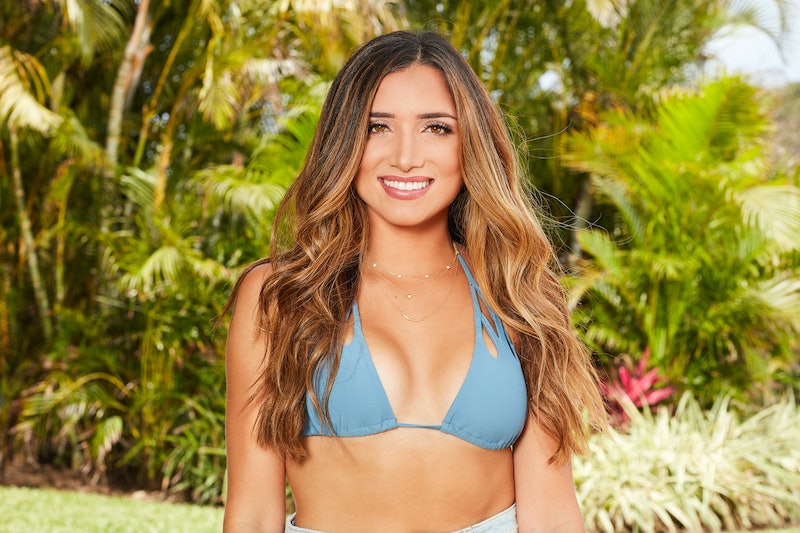 Even though fans didn't get to hear from Nicole Lopez-Alvar during the Bachelor in Paradise finale after-show, the contestant is opening up about her reality TV journey on Instagram. In a Sept. 18 post, Paradise star Nicole addressed her split from Clay Harbor with a very open message about her own self-worth. Not only does her post give BiP viewers insight into her decision, but it's a lesson others can learn from too.

On Instagram, Nicole posted a photo from the end of her BiP journey, which featured her hugging the one and only Chris Harrison. The snap was actually taken before she split from Clay and told him that she did not want to continue dating him after the show ended. "I remember this hug like it was yesterday. The warmth, the comfort. I’m not the touchy-feely type, but I needed it," she began her caption.

The contestant went on to write that she was used to accepting minimal effort in her romantic relationships, "Even after sharing my heart and soul with them, both emotionally and physically, I had learned to accept that I wasn’t worth fighting for. That I was always someone’s 'maybe.'" But, as she continued to write, she was done ignoring her own well-being,

"If I was still that woman who didn’t know her own worth, I know I would’ve stayed with Clay. I would’ve accepted the bare minimum. However, I am not that woman anymore."

After this self-realization, Nicole shared a new perspective about her Paradise hug with the Bachelor Nation host, "Now, when I see this picture, I see strength in that embrace. I see a woman who didn’t take 'maybe' for an answer." Even though her BiP journey didn't end the way she wished it would've, Nicole ended up with way more than she ever could have expected, "Chris Harrison, thank you. That scared girl who stepped out of the limo at the “Bachelor Mansion” a year ago is no more. While she may not have gotten the outcome she wanted... she gained so much more. ❤️"

Chris, ever the wise shoulder to lean on for Bachelor Nation contestants, had such a lovely response to Nicole's Instagram post, as he commented with, "We love you and we're proud of you. My arms are always open my friend."

Following the end of Paradise, Nicole has been vocal on social media about how the experience has changed her for the better. On Twitter, she even addressed one of her stressful, and super bold, moments on the series. As you'll likely recall, during the Fantasy Suite portion of the finale, Clay told Nicole that he thought it would be best to take some time apart rather than spend the night together. In response, Nicole told the athlete that if he wanted space, he should go get it, effectively kicking him out of what would have been their romantic Fantasy Suite.

As Nicole wrote on Twitter, it was a statement that the "Nicole from 2017, before The Bachelor," wouldn't have made. She wrote that she "would’ve continued dating him. But I have grown in so many ways — most importantly, to know my worth."

While her time on Paradise didn't end with an engagement (or even with her walking off the beach with Clay), Nicole clearly left with something way more important — a renewed sense of self-worth.