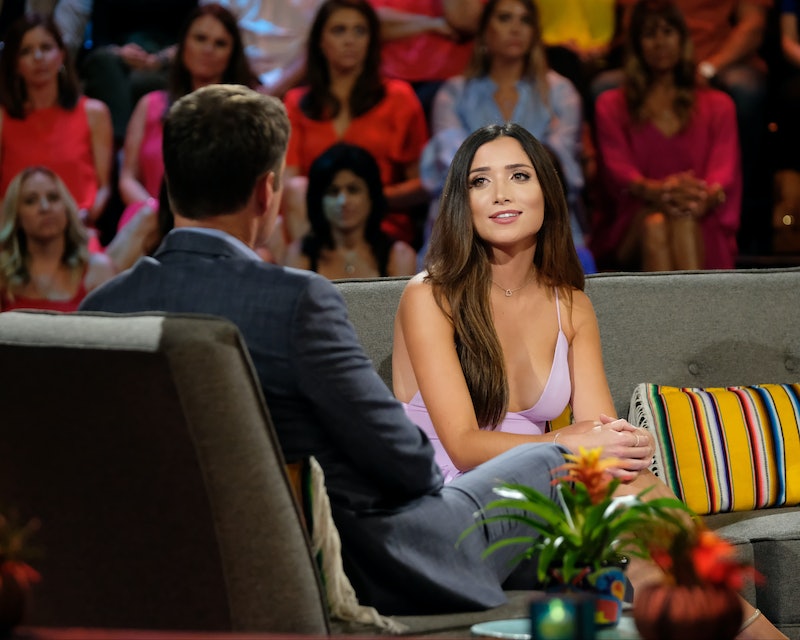 Season 6 of Bachelor in Paradise ended with three engagements and one devastating breakup, after Clay Harbor and Nicole Lopez Alvar called it quits during the show's finale on Tuesday night. But after spending the season as one of Paradise's most committed couples, Clay & Nicole's BiP breakup was hard to watch. And the worst part was that Nicole and Clay weren't even at the BiP reunion to explain themselves.

Despite having their ups and downs during their time on the beach, Clay and Nicole seemed to be completely solid after coupling up shortly after arriving in Paradise. However, by the time "Decision Day" rolled around in the BiP finale, things between the couple were strained due to the fact that Clay wasn't ready to propose, and Nicole felt like he wasn't as committed to their relationship as she was. Tensions came to a head between the couple before the Fantasy Suite, when Clay admitted that he had doubts about their relationship.

"I just don't understand, why were you leading me on to believe this was a whole fairy tale," a teary Nicole said to the camera after Clay asked that they spend the night apart so that he can think through things and make sure he was "100 percent" committed. "I thought we were on the same page," she said the next morning, "I never thought I had to worry about my relationship with Clay."

Though she admitted that she could "truly see myself engaged to Clay," Nicole stated that she needed to know he was fully on the same page as her in order to accept a proposal. Unfortunately, when she and Clay met up on the beach, the former football player was unable to tell her that he loved her.

"I'm not there yet," Clay said. "Having those feelings, it's not easy and it's scary." Despite his offer that they take things slow and get to know each other more after the show is over, Nicole declared that she deserved someone who loved her as much as she loved him. "You know or you don't. That's it, Clay," she said. "I love you so much and I care about you so much but I need to do what's best for me."

Clay raised a few eyebrows when he first arrived on the beach at the start of Season 6, as he had split from his ex-girlfriend, Angela, just three months before filming started on the show. With the breakup so fresh in his mind, a lot of Bachelor Nation questioned whether or not he was ready to start a new relationship, but the former footballer appeared to want to move on and pursue a romance with Nicole.

Their relationship survived Nicole's brief interest in Christian — who left the show abruptly after a fight with Jordan — but once Clay came face to face with his ex at Chris and Krystal's wedding, he seemed to start questioning his feelings. After rehashing their breakup, with Clay admitting that his decision to come to Paradise so soon after their relationship was "selfish," several other members of Bachelor Nation noted that Clay never mentioned that Nicole was his girlfriend during any of his conversations with Angela ... which made things even more uncomfortable when Angela arrived on the beach just a week later.

"I can [sic] homestly say I would never have went to paradise if I had known my ex [sic] was be showing up," Clay wrote on Twitter as the episode featuring Angela's arrival aired on Sep. 2. Despite professing his dedication to Nicole, it was clear that having his ex on the beach with them really bothered Clay, and even after she left, it seemed like he was unable to take things to the next level with Nicole.

Things may not have worked out for Nicole and Clay on this season of Bachelor in Paradise, but at the end of the day, it seems like Nicole made the decision that was best for her in the long run.