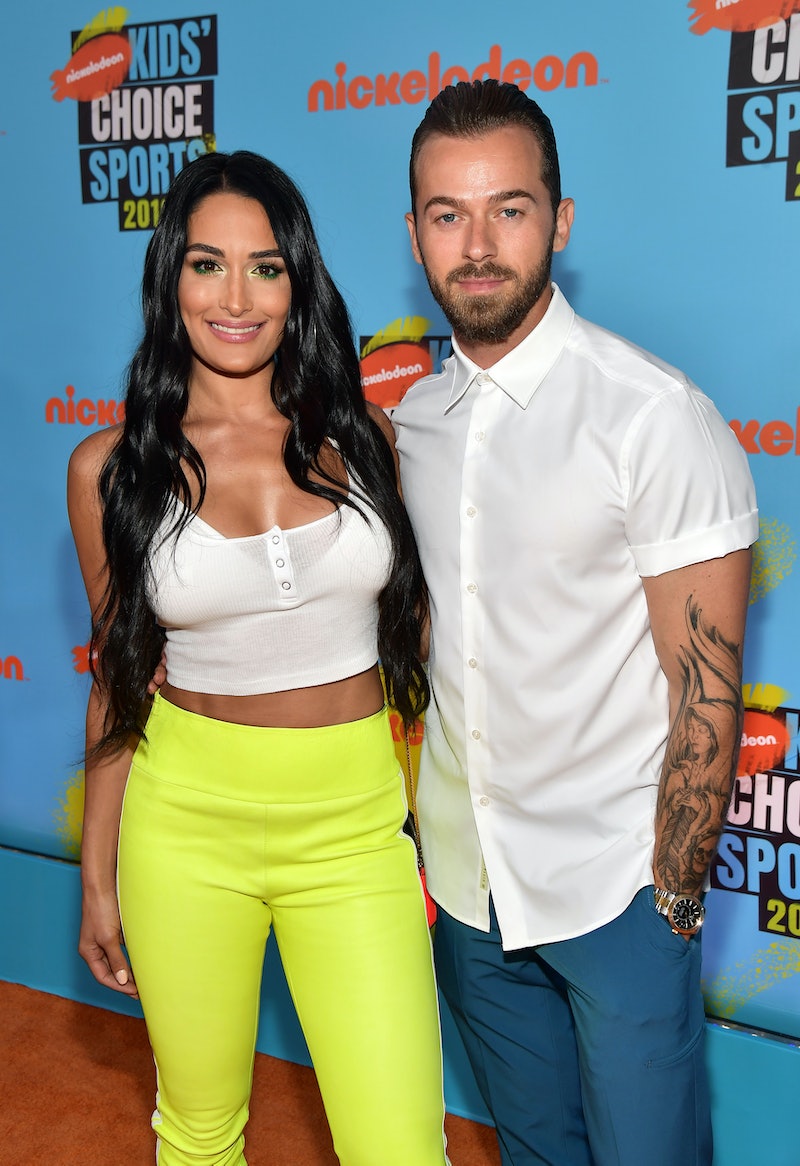 The ninth season of Total Divas debuts Oct. 1, and with it comes some big changes to the cast. Though Nikki and Brie Bella have been full-time cast members since the show's premiere, in the new season, they'll just be making guest appearances. So if you're wondering where Nikki Bella and Artem Chigvintsev's relationship stands, you might not be getting a ton of updates from the show.

That being said, Bella and Chigvintsev have been sharing a lot about their relationship online, and they've made pretty clear they're still going strong. At this point, the couple — who met when they were partners on Dancing With the Stars in 2017 and began dating after Bella split from John Cena the following year — have been together for roughly 10 months. They told Entertainment Tonight in September that they'll be celebrating their one-year anniversary around Christmas.

But it hasn't all been smooth sailing. Bella and Chigvintsev also told ET that Bella's twin sister, Brie, wasn't a huge fan of Chigvintsev at first. According to the couple, Brie was being overprotective of her sister and wouldn't even video chat with her sibling if Chigvintsev was there. Now, though, everyone gets along just fine. "They cook together all the time," Bella shared.

Beyond that minor obstacle, Bella and Chigvintsev seem to be really happy together. They've gone wine tasting. They've attended concerts. They've designed an office. They've looked at baby clothes (which weren't necessarily for their future baby).

As far as what the future holds, Bella asked Chigvintsev how many kids he wants to have on an episode of the podcast she hosts with her sister, The Bellas Podcast. "If I have to throw a number, I would probably say two because that's how I grew up and I had a good relationship with my brother," he responded, as reported by E! News. She then asked, "With me?" And he said, "That's so cute. Umm, yeah!" Bella said she also wants to have two kids, and if she could choose, would want to have twins: a boy and a girl.

The pair told ET that they hadn't discussed marriage yet, but Chigvintsev's parents did already ask about the future. "I think the tricky part is our ages and we're falling in love so quick," Bella said (she's 35, he's 37). "We should be moving really fast, but then I get very hesitant and I like to just slow down a bit. But then when his dad asked about babies I'm like, 'Well, I guess I am almost 36 years old, maybe that's why he's asking.'"

It seems like if things keep going as well as they are, Bella and Chigvintsev could have plenty of big life milestones to navigate together. For now, they have their one-year anniversary to look forward to, and the pair will be appearing together on the upcoming season of Total Divas spinoff Total Bellas, which will premiere in early 2020 and should include plenty of details about their relationship.