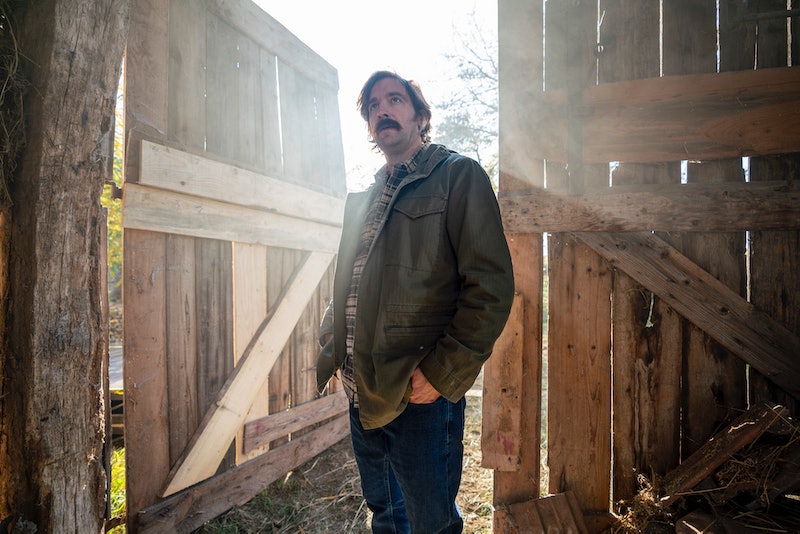 In the most recent episode of BBC America's Killing Eve, Eve’s ordinarily understanding husband Niko, left without use of his vocal cords after being stabbed through the throat with a pitchfork, types a message for his estranged wife into an automated voice box. “Piss off forever,” he tells her, emboldened perhaps by the fact he doesn’t have to utter the cutting farewell himself. Or maybe it’s just that Niko — supportive, adoring, reasonable Niko — has finally had enough of Eve breezing back into his life only to endanger it.

“He needs to make her realize that he's serious that he doesn't want her anymore,” says Owen McDonnell, the actor who has spent the last three seasons transforming Niko from a mild-mannered school teacher into a man desperately clinging to whatever normalcy he can find. “For his sanity, for his safety, for his general health, he needs to be as far away from her as he can.”

Niko has endured a lot. Once, he was the neglected spouse of a stereotypical workaholic, sustaining the thousand familiar cuts of late nights at the office, last-minute business trips, and unreturned phone calls. Now, he’s Anne Archer in Fatal Attraction. He’s been stalked by Villanelle and forced to watch as his wife’s sociopathic admirer murders his friend. Still, McDonnell is quick to remind me that Niko wasn’t the perfect husband, even before Villanelle arrives in their lives. That the strain on their marriage isn’t all Eve’s fault is something he and co-star Sandra Oh talked about before filming even began.

“We both decided this was a couple that certainly loved each other, but they were at a stage in their relationship where they kept missing each other,” McDonnell says, painting the picture of a pedestrian marital slump. “Some of the soul had gone out of their gestures and they became complacent. The things that you do for someone become the norm, and they're not special anymore.” Villanelle was cunning enough to exploit the fissures in their marriage, but she didn’t cause them.

McDonnell resists the instinct to apportion blame for the couple's breakup. Where others — for example, me — see a put-upon spouse who couldn’t compete with the glamour of Eve’s globe-hopping espionage career, McDonnell sees a man who, at least in the beginning, wanted to play that role. “To me, he was a guy who got a kick out of making her happy, possibly sometimes to the point of maybe being slightly controlling. Constantly being nice and constantly having an expectation of someone else can be controlling in its own way.”

Still, deferential push-over or self-sacrificing ball and chain, even Niko proves his devotion has his limits. Eve has finally made The Grand Gesture — dropping her work on the spot to come find him in Poland — only to find it's not nearly grand enough. The life she wants back is no longer waiting up for her to come home from the office. Given the state Niko is in, McDonnell calls it a "double rejection." For someone in such a weak and desperate place to still turn you away, McDonnell surmises, “maybe kicks her into an even darker place.”

Niko was Eve's last toehold in life before MI-6 and, crucially, before Villanelle. He was proof of another mode of existing. On a more practical note, he's the last person Eve is directly responsible for. "Without that responsibility, does that make her more reckless?” McDonnell wonders. “Who knows?”