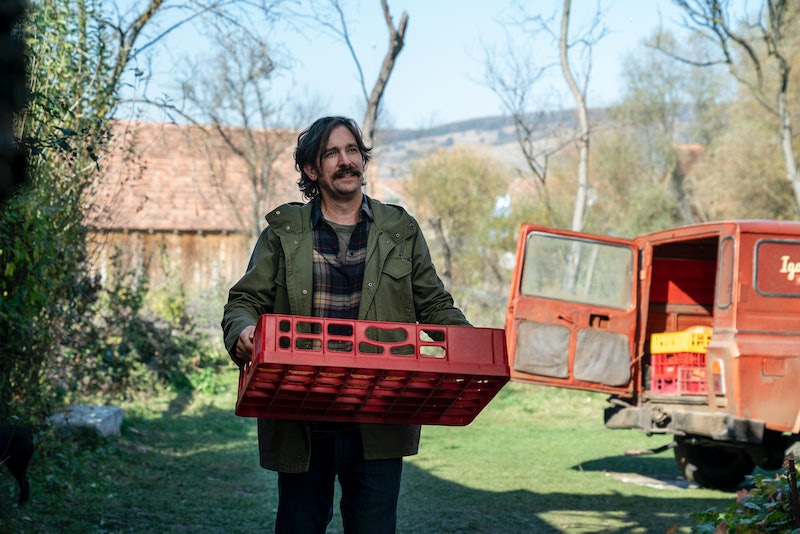 Spoilers ahead for Season 3, Episode 4 of Killing Eve. Eve (Sandra Oh) finally demonstrates some desire for a normal life in the most recent episode of Killing Eve. Upon receiving a text message from her estranged husband Niko (Owen McDonnell), she jumps on a plane to Poland to meet him. Having allowed her fascination with Villanelle to drive him away, she claims in the wake of Kenny's death to finally understand her "priorities." But by the time Eve arrives in the tiny hamlet where Niko has been laying low as a deliveryman, Villanelle’s new handler Dasha has put a pitchfork through his throat. Niko's fate on Killing Eve certainly looks grim.

Over the past three seasons, Niko has come to represent Eve’s life from before: before espionage, before Caroline, before Villanelle. But it’s only since she was shot at the end of Season 2 that Eve has shown any interest in returning to that life. Niko used to be the humdrum antecedent to her thrilling new existence; now, he's the healthy alternative to dying in the line of duty.

Dasha has tagged the murder weapon with a cryptic note meant to mimic the kinds of games Villanelle likes to play with Eve. Her ambition is to "drive a wedge" between the pair, in the hopes that her charge will be less distracted. It seems likely that Eve will suspect a jealous Villanelle is behind the attack.

Which also means that Eve, so often caught between two worlds and two lovers, is suddenly without options. If Villanelle killed Niko, it’s a betrayal even Eve won’t forgive. But if Niko is truly gone, so is her last tether to a normal life.

One upshot of Niko's death is that Eve will likely escape the very hard choice she's in Poland to make. It’s one thing to fly across Europe on a romantic impulse, but reconciling with her husband would require more permanent sacrifices. It would mean making their marriage a priority every day. It would mean time away from the clandestine world of espionage. And, crucially, it would mean giving up Villanelle once and for all.