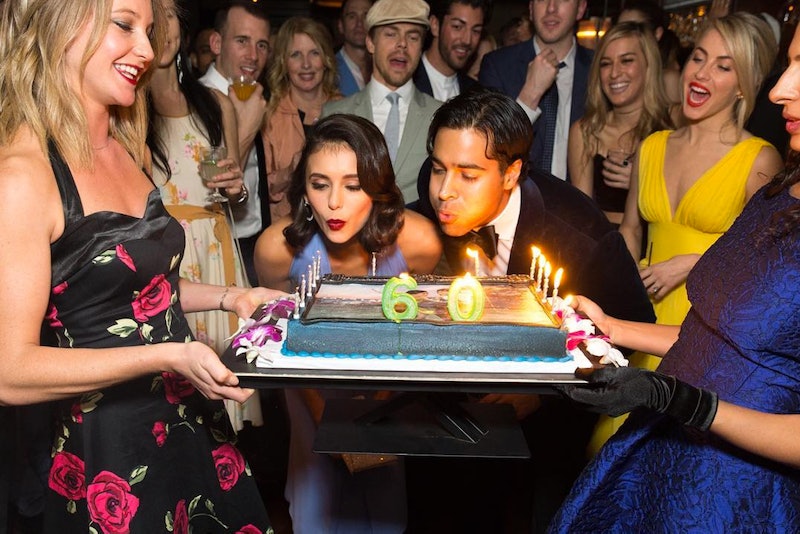 A certain Vampire Diaries star just turned 28, and you know what she did? Well, Nina Dobrev threw a La La Land-themed birthday party, and her dress was flat-out spectacular: She wore a periwinkle blue halter dress that easily could have doubled for one of Emma Stone's many stylish wardrobe changes in the popular multiple Golden Globe-winning film. She paired the charming look with retro waves and red lips to further up the '50s-inspired ante.

The birthday bash was a joint party thrown for both Dobrev and polo player Ronnie Bacardi, who was celebrating his 32nd year (one of the hashtags for the event was #collectivelyturning60, which was evidenced by the numbers on the cake as well). Both birthday honorees looked like they had quite the rollicking time, especially since the party's other hashtag was #herestothemesswemake.

Dobrev and Bacardi weren't the only one dressed to the midcentury-inspired nines — other famous attendees included Aaron Paul, as well as Derek and Julianne Hough, and they all completely nailed the theme, with Paul in sharp navy suit and retro tie, Derek Hough in a gray suit and jaunty newsboy cap, and Julianne Hough in a dazzling buttercup yellow dress, and almost ridiculously on-point scarlet red lipstick.

The rest of the guests were similarly well-dressed, and retro frocks and red lips continued to reign supreme.

Still, perhaps the best thing to come out of the party's theme was the birthday cake.

The marriage of photoshop skills and cake decorating skills here is almost too much to handle, right guys?