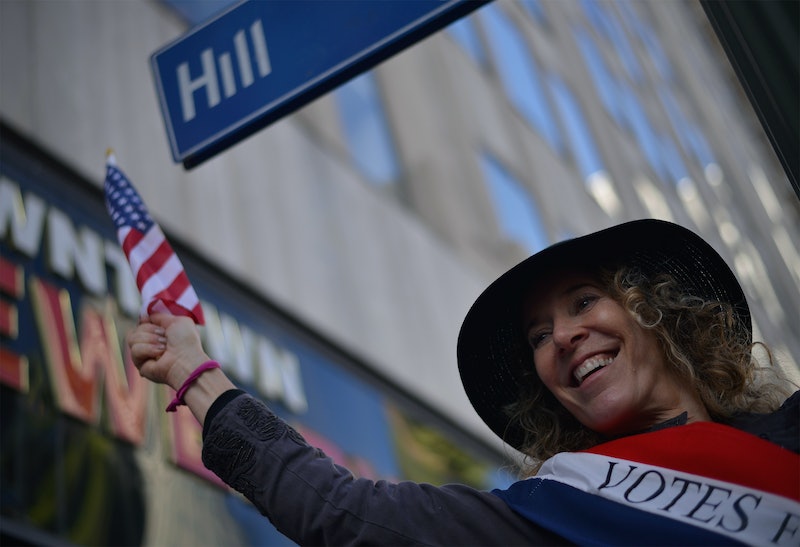 As a Latina living in the United States, I occasionally find myself watching the news on Spanish-language channels with my mother. On Election Day, as millions across the country cast their votes, we saw a reporter on Telemundo asking voters exiting the polls which candidate they'd chosen. One woman explained that while she disagreed with Donald Trump on almost everything else, she'd voted in his favor because of his anti-abortion stance. Ultimately, 26 percent of Hispanic Catholic voters backed Trump, according to a study conducted by the Pew Research Center. While this was a minor portion of the community, I couldn't help but have a lot of questions for these religious voters.

A 2016 study by Gallup estimated that 89 percent of Americans believe in some sort of deity, so my questions were not for the overwhelming majority of the U.S. population. When I say "religious voters," I am specifically referring to those whose ballot decisions are predominantly based on their religious beliefs. To be even more specific, I'm referring to those who voted for a candidate — Donald Trump — who, in my view, shamelessly flaunts beliefs that go against the teachings of most religions. In case it's still not clear, I'm talking about the Christian right.

Trump's apparent lack of altruistic qualities, not to mention the setbacks many of his policies would prompt to many causes held dear by the religious groups in question, make the religious support of Trump baffling to me.

Here are some questions I have for those individuals.

What Actions Are You Taking To Prevent Unwanted Pregnancies?

Given that abortion is one of the top concerns many conservative religious groups have, it would seem like common sense for them to support services that allow women to prevent unwanted pregnancies. Yet many religious nonprofits actively work against measures that would allow women to lower their chances of ever needing to seek an abortion.

In January, the Senate voted to eliminate a provision requiring health insurance companies to cover birth control from the Affordable Care Act, a provision that has largely been opposed by faith-based organizations. The "solution" religious organizations typically propose is abstinence until marriage, one of the least successful types of sex education. Furthermore, this philosophy doesn't take married women into account.

2. How Would You Help Children After Their Births?

As the nun Sister Joan Chittister once said:

I do not believe that just because you're opposed to abortion, that that makes you pro-life. In fact, I think in many cases, your morality is deeply lacking if all you want is a child born but not a child fed, not a child educated, not a child housed. And why would I think that you don't? Because you don't want any tax money to go there. That's not pro-life. That's pro-birth. We need a much broader conversation on what the morality of pro-life is.

3. How Do You Explain The Overwhelming Whiteness Of Pro-Republican Religious Groups?

The nine most Republican-leaning religious groups in the country are currently all Christian denominations. Faiths largely composed of ethnic or racial minorities — such as Islam, Hinduism, Buddhism, and Judaism — overwhelmingly favor the Democratic Party. Historically black Christian churches also lean heavily to the left.

4. How Can You Vote For A Party Who Won't Help Those In Need?

Remember this part of the Bible?

Then the King will say to those on his right, ‘Come, you who are blessed by my Father; take your inheritance, the kingdom prepared for you since the creation of the world. For I was hungry and you gave me something to eat, I was thirsty and you gave me something to drink, I was a stranger and you invited me in, I needed clothes and you clothed me, I was sick and you looked after me, I was in prison and you came to visit me.'

Followed by the damning of those who did not feed, clothe, visit, or give shelter to Jesus? This seems contradictory to supporting a party and candidate who fiercely oppose food stamps, welfare, or helping the homeless.

5. Does This Trump Quote On Revenge Sound Christian?

In his 2004 book How to Get Rich, Trump wrote, “For many years I’ve said that if someone screws you, screw them back. When somebody hurts you, just go after them as viciously and as violently as you can.”

6. What About Trump's Obsession With Wealth?

The Bible is not obscure regarding wealth and obsessing over material things. Trump's habit of bragging about how rich he is makes him a curious leader to vote for as a believer in the Bible's teachings.

7. Speaking Of Money, What About All The Workers He Didn't Pay?

Hundreds of contractors and Trump employees accused the businessman of either not paying them at all or paying them below minimum wage. Again, doesn't match up with a Bible teaching: "You shall not oppress your neighbor, nor rob him. The wages of a hired man are not to remain with you all night until morning."

8. What Happened To Not Judging Others?

A core Christian teaching is the importance of being compassionate and leaving the judgment of others to God. Yet the Christian right's opposition to LGBT rights, among other marginalized group's rights, and their support of politicians who push an agenda to restrict their lives is ardent.

9. How Many People Will Be Harmed By The Politicians You Support?

If only one group seems to feel safe under a Trump presidency while a long list of others feels threatened, it should be a sign as to the level of compassion he is perceived to have.

These are just some of the few questions I have for religious voters.