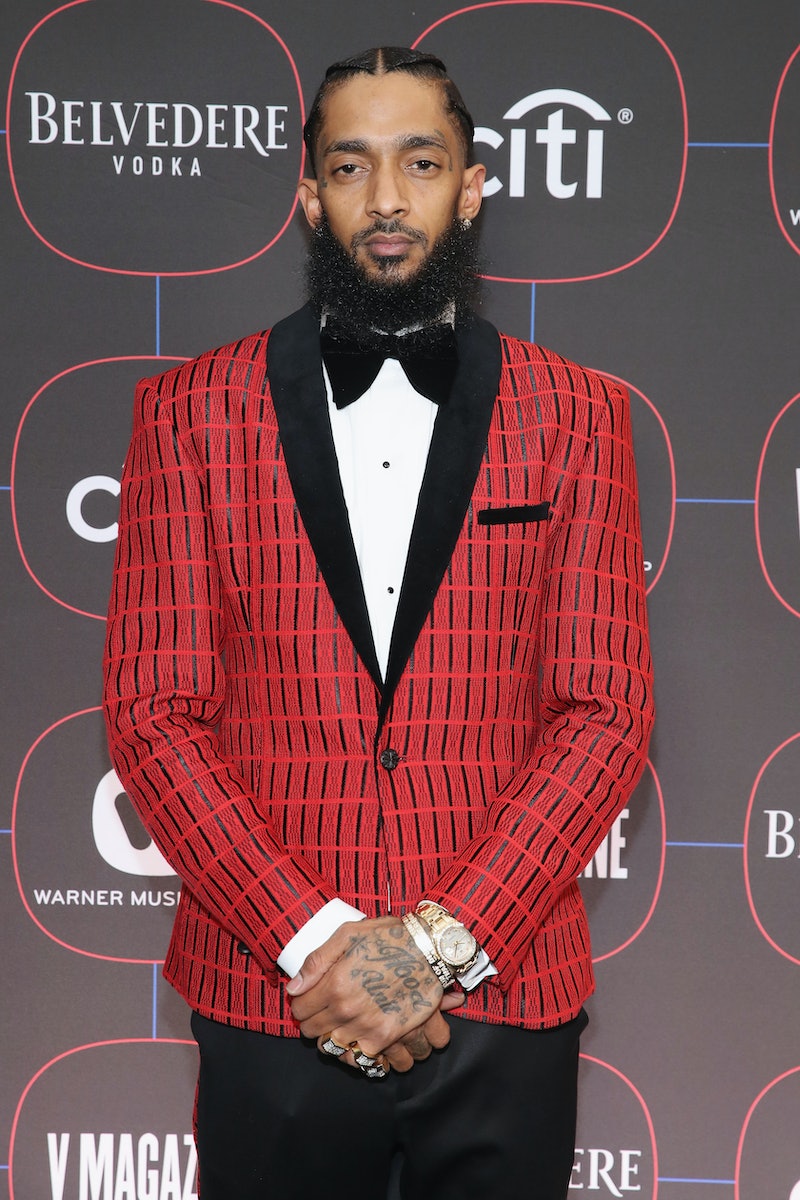 It's only been a little over a week since they lost their son at the age of 33, and now Nipsey Hussle's parents have opened up about their late son. In an April 5 interview with the Los Angeles Times that People and other outlets reported about on Tuesday, Hussle's mother, Angelique Smith, and his father, Dawit Asghedom, commented on their son and his death for the first time publicly. The rapper's brother, Samiel Asghedom, and girlfriend, Lauren London, also spoke with the LA Times.

As Dawit told the publication about his son, who was born Ermias Asghedom, "It was like he was sent by God to give some love to bring us together because that’s what his lyrics were saying, always. He’s not shy to tell the truth even though it might not look good. He wasn’t scared of anything. [God] sent him to send a message."

For Dawit, he said "God has his own plan," and that Hussle "had completed what he needed to be doing and he did it early so [God] probably want to take him early too."

Smith expressed how she is not only at "perfect peace" following Hussle's untimely death, but she also said about his memory,

"I would like for him to be remembered as a humble, spirited, respectful man who had, since his childhood, had an extraordinary and unlimited intellectual capacity."

As reported by the LA Times, Hussle died after being shot multiple times during the day outside of his The Marathon Clothing Store in Los Angeles. Hussle was pronounced dead at the hospital. Two other people were also injured in the shooting.

Eric Holder, Hussle's suspected murderer, was arrested by police, on April 3. According to a release from the Los Angeles County's District Attorney's Office (via an April 4 report from People) Holder was charged with one count of murder, two counts of attempted murder, and one count of possession of a firearm by a felon. People also reported on April 4 that Holder pleaded not guilty in court.

In the time since his passing, many have publicly paid tribute to Hussle. And his brother Samiel reflected on the major impact his sibling had. "There’s a lot of politics within the area that we grew up in, but he stayed the course and showed what he was about," Samiel told the LA Times. "He made something work in an area that was run-down, that people were scared to come to, and he turned it into a landmark."

London discussed how much of a "protector," "truth seeker," and "truth speaker" Hussle was. "I’m going to keep my head high and always represent for my king to the fullest," she also told the LA Times. "He loved his kids. He was a family man. His family came first."

Hussle and London were together for five years and have a 2-year-old son, Kross, together. They both also have children from previous relationships. London previously remembered her late boyfriend in an emotional Instagram (above) posted on April 2. She wrote, "I am completely lost I’ve lost my best friend My sanctuary My protector My soul....I’m lost without you We are lost without you babe I have no words."

There's no denying Hussle will forever be remembered by his loved ones, just like his music and legacy will be.

More like this
Michelle Obama Opened Up About The "Discord And Discomfort" Of Marriage
By Stephanie Topacio Long
Larsa Pippen Is Reportedly Dating The Son Of A Legendary NBA Player
By Jake Viswanath
Is Queen Elizabeth II Or The Royal Family In Netflix’s 'Harry & Meghan' Docuseries?
By Jake Viswanath
Harry & Meghan React To The Racist "Straight Outta Compton" Headline
By Jake Viswanath
Get Even More From Bustle — Sign Up For The Newsletter