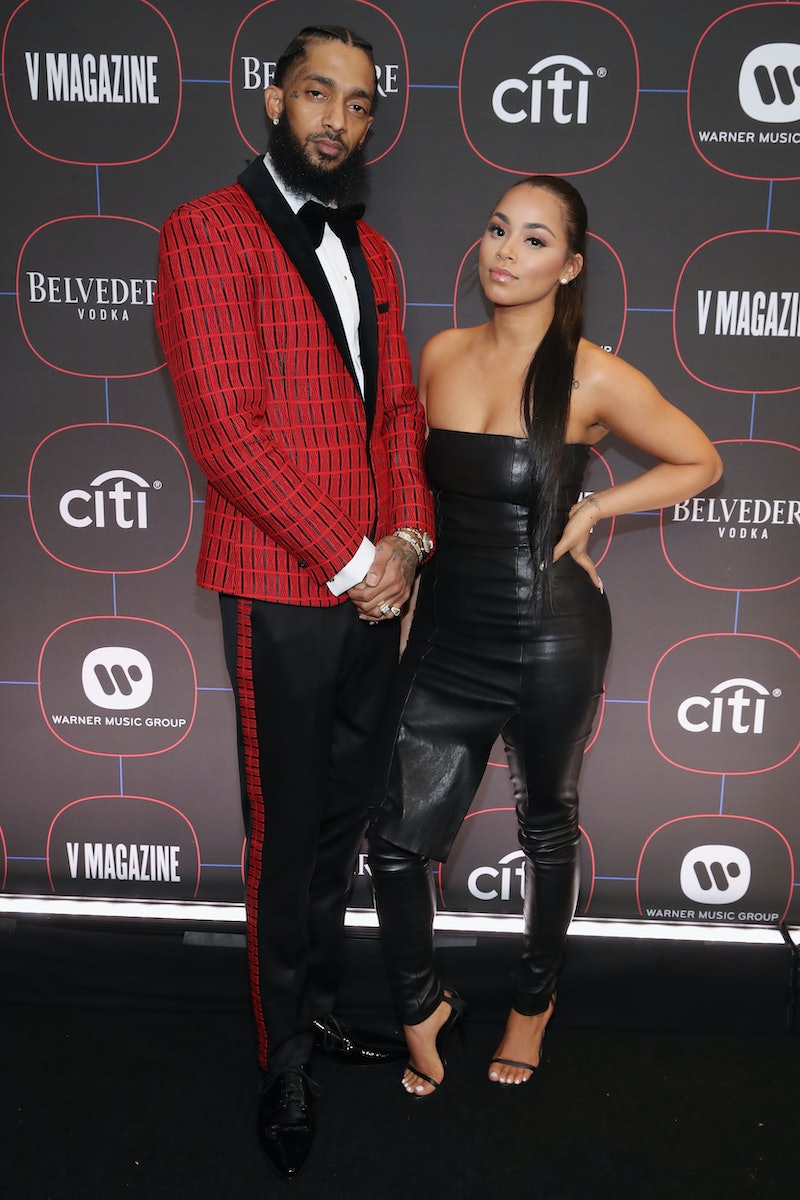 The world is still processing Nipsey Hussle's death after he was shot on Sunday, March 31. Following an outpouring of love from celebrities and fans, his partner, actor Lauren London, opened up about Hussle's death in an Instagram post shared Tuesday, April 2.

As the Los Angeles Times reported, Hussle, born Ermias Asghedom, was shot multiple times in broad daylight at 3:20 p.m. on March 31 outside of his The Marathon Clothing Store in Los Angeles. He was pronounced dead at the hospital, and two other were injured in the shooting. Police arrested Hussle's suspected murderer, Eric Holder, on Tuesday, but not much is known about what events lead to the rapper's death.

London posted her tribute to Hussle on Instagram a few hours after the arrest, making her first public statements. "I am completely lost," the actor wrote on Instagram. "I've lost my best friend, my sanctuary, my protector, my soul.... I'm lost without you. We are lost without you babe, I have no words." Hussle and London had been together for five years and have 2-year-old son Kross, as well as children from previous relationships. (London has a son with rapper Lil Wayne and Hussle was also father to daughter Emani Asghedom.)

About a month before his death, Hussle and London's relationship was highlighted in a GQ profile that claimed the couple was "redefining what a storybook romance looks like in 2019." As London told the magazine she began following the musician on Instagram in 2013 after she bought his exclusive mixtape (only 1,000 copies were made, according to Nipsey) as a wrap present for her costars on The Game. Eventually, he slid into her DMs and the pair had been together ever since.

The duo also took part in "The Couples Quiz" for GQ, a fun take on The Newlywed Game. Their chemistry is clear in the video — Hussle got an impressive 24 out of 30 questions right. And, in a particularly adorable moment, when asked who her celebrity crush is, he said he didn't know, but as London explained, "I don't have a celebrity crush, I'm with my celebrity crush."

At 33, Hussle was just hitting his stride. He released his debut studio album, the Grammy-nominated Victory Lap, in 2018 after dropping numerous mixtapes throughout the 2000s and 2010s. And celebrities like Rihanna, John Legend, Cardi B, Snoop Dogg, and many others have already shared an outpouring of love for Hussle on their social media accounts after his tragic death. They have also been sharing their support for London.

Jada Pinkett Smith wrote on Instagram, "My heart bleeds for all those who love him. Stay strong @laurenlondon. He's an angel on your shoulder now." And in an Instagram Story, Kim Kardashian wrote that she's sending "so much love & prayers" to London. Meanwhile, Hussle's sister Samantha Smith also posted on Instagram about her brother's death, promising to take care of London, their son, Hussle's daughter, and their brother now that he's gone.

Hussle impacted many people throughout his short life. And as London noted in her post following his death, he was her best friend. So she deserves respect, privacy, and support as she continues to mourn the sudden passing of her partner.

More like this
Kanye West Apologizes To Kim K "For Any Stress I Have Caused" In Rare Interview
By Jake Viswanath
Adam Levine Denies Having An Affair — But Admits He “Crossed The Line”
By Jake Viswanath and Radhika Menon
Lizzo Twerks While Playing James Madison's 200-Year-Old Crystal Flute Onstage
By Radhika Menon
Everything To Know About Taylor Swift’s 10th Studio Album, 'Midnights'
By Grace Wehniainen and Jake Viswanath
Get Even More From Bustle — Sign Up For The Newsletter