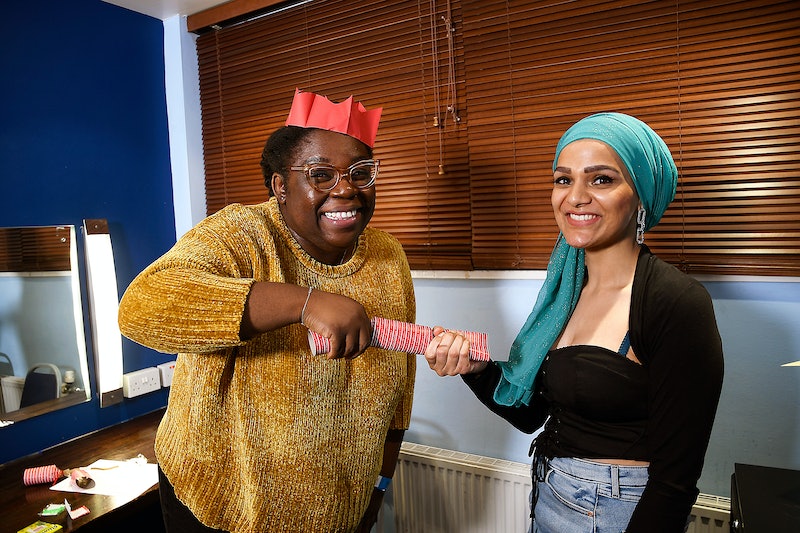 Since the birth of No Country For Young Women in 2018, Sadia Azmat and Monty Onanuga — friends who first met as work colleagues in a call centre —have been paving the way for raw, honest, and hilarious podcasting in the UK. The show's profile has skyrocketed over the last two years after finding a home on BBC Sounds, with episodes leaving no awkward topic or hilarious conversation unturned.

Described as a podcast on: “Life, love, and work in a white man's world,” comedians Sadia and Monty explore what it’s really like being women of colour in Britain, especially when at times you only feel Brit-ish. They hash out the challenges women of colour face working in the corporate world, and cover topics including family, sex and relationships, and entertainment and culture.

Just to top it off, the pair feature some incredible guests and have already interviewed Stateside comedian and actor Phoebe Robinson, author of bestselling novel Queenie Candice Carty-Williams, and singer-songwriter Joy Crookes, to name a few.

Just in time for the festive episode, I spoke to the hosts about the pressures of code-switching at work, why taboo topics are so important for women of colour, the power of podcasts, and what to do if you’re lonely this Christmas, or don’t see eye-to-eye with your family.

Niellah Arboine: How did No Country For Young Women get started?

Sadia Azmat: We kind of always had these conversations about how we’re British, but sometimes we don’t always feel British in certain circumstances. For example, if we’re doing an office job we have to put on a different face. It’s how we navigate being women of colour, and also getting d*ck along the way!

NA: And how did you two first meet?

SA: We were working together many, many years ago at a call centre and I was trying to be a comedian, and Monty was doing comedy as well, so we had a mutual interest.

NA: What’s so important about talking about taboo or uncomfortable topics especially as people of colour in the UK?

Monty Onanuga: A lot of these taboo topics have been happening behind the scenes. For example, if you come from an ethnic minority background, parents will push you to study, study, study and as soon as you’ve finished studying “get married, get married, get married! Have kids, have kids!” If we’ve never seen a bloke in our lives before, don’t even know what a d*ck is, how are we supposed to make a kid? How do we know we’re entering into healthy and fulfilling relationships if we don’t have these conversations?

It’s important to talk about things like touching yourself, knowing what you like before you end up in a place where you’ve never had a decent orgasm before. These conversations should happen, because our parents do it, we do it, it’s been happening for millennia - so let's talk about it.

NA: You talk a lot about this idea of code switching [as] “balancing your ethnic”. Is it something you find annoying or do you see it as a superpower?

MO: I work in a corporate space. I’ve never considered code switching a superpower but maybe it should be. I find that I have to soften the way that I speak at work, if I challenge something in the same way that my colleagues might challenge something, I’m deemed as aggressive. I use the name Monty, because people can’t pronounce my name properly.

But some of the things I’ve had to switch in the past like my appearance, for example. I don’t feel conscious to wear faux locs to work, things like that are becoming a little bit more acceptable. People are speaking out against it.

NA: What guests so far on your show stands out for you the most?

SA: We’re really lucky we’ve had a mixture of comedians, musicians and actors. It’s a nice balance of tone. We had a showcase in Edinburgh of up and coming and very established comedians. Aditi Mittal and Vir Das who both had Netflix specials and are at the top of their game. We’ve also had Nish Kumar and Rose McGowan, that’s one of our most high profile stars.

MO: We’ve also had influencers, people that I follow. It’s cool to have people that we like and respect on the podcast, and being able to share experiences and realising we’re not that dissimilar and just having a chat and giggle.

NA: How do you think podcasting has changed over the last couple of years?

SA: It's a very affordable way of starting up. People can literally start in their bedrooms, you don’t need anyone's approval, it’s a great way of translating your authentic voice or story to such a wide audience. It’s a really exciting time. There’s a podcast about everything how to eat cereal how to wash your bum — if you have a question, there’s probably a podcast about it.

NA: For your Christmas special, you discuss what the festive season is like for different people, what advice do you have for people who don’t celebrate, or can't spend it with their family?

MO: I would say it’s a really difficult time of year. if you have friends that you call family who you can spend Christmas with, that’s great. If not, if you could make Christmas the way that you want it to be. There’s no rules about how Christmas should be spent. There are a lot of places that need volunteers around Christmas like soup kitchens.

SA: You can shop the sales. Also shameless self-promotion: why don’t you listen to some podcasts? Maybe ours! It’s a good way of spending your time. Have us on in the background.

NA: What’s the best way to deal with problematic family members over Christmas, like your homophobic uncle or your racist granny, or is Christmas the time at all?

MO: I do spend Christmas with my family. I love them, but each of them are problematic in their own special way. There’s always a row and I’m always involved. This Christmas I'm choosing to pick my battles and hold my lips. For someone who is a recovering a**hole, I’ll be selective with who I chose to engage with and keep the pleasantries. If you don’t feel like you have to then fine! If someone is coming after you unnecessarily at Christmas, give it back to them and then you deal with repercussions after.

SA: If you’ve been drinking and stuff, it’s probably not the time to resolve issues — so play it by ear. Everyone has something on their plate whether we know about it or not. The comedian in me wants to be like "Fight! Get it all out." If you don’t see these people often try and keep up the pleasantries. Sometimes less is more.

As we come to the end of the year and decade, what can we expect from ‘No Country’ next year?

SA: We’re just at the moment waiting for news from the BBC about a new series. We’re very hopeful we'll be able to come back – even better!

MO: Very much more of the same. We’d like to have bigger guests, continue to have diverse guests we’re interested in, and hopefully make people laugh.

No Country For Young Women, including its Christmas special, is available now on BBC Sounds.