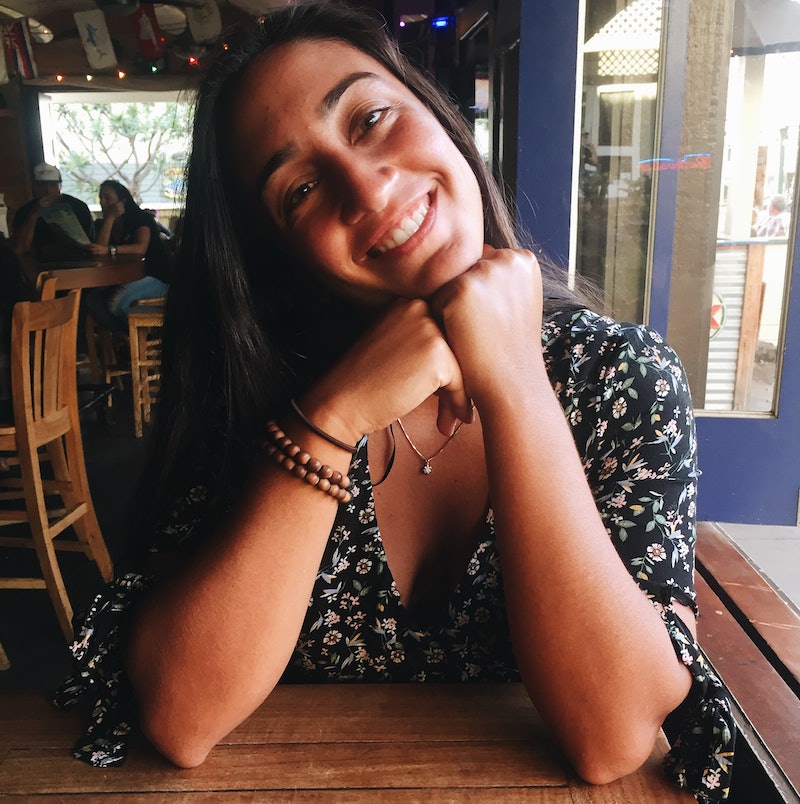 I first questioned my identity as a biracial Indian American woman during a standardized test in middle school. When filling out the question about my ethnicity, I remember reading all the boxes and thinking, “Which one am I?”

I used to check “Caucasian,” but that caused anxiety because I was worried that if someone saw me in person, they would see my light-brown skin and think I was misrepresenting myself. But it also didn’t make sense to check "Asian or Pacific Islander” because I’m not fully Indian. I was worried that if I did the latter, especially on my college applications, that I would be lying about my identity to appear unique. I created fear in my mind that someone was going to show up at my door to see if I was actually who I said I was.

I am a biracial, light-skinned, Indian American woman. I grew up without much influence from my father’s Indian heritage in America. So even though I look "ethnic," I don’t know how to answer many questions about Indian culture and traditions. Moreover, when you’re racially ambiguous, it can lead to a lot of questions and curiosities from people trying to figure out “what” you are. And in my case, why I'm "so tan."

My father immigrated to America from India and married my mother, an American woman with Italian ancestry. This genetic combination gives me fair, olive skin that appears light, but darkens the moment I spend any time in the sun. People have made hurtful and confusing comments about my skin tone my entire life, and it impacted my understanding of my biracial identity. Was I a brown girl, or just tan?

And whenever I go on vacation, the conversation about my skin tone never seems to stop. I recently traveled to Hawaii and I wandered into a nail salon for an eyebrow waxing. An older, white woman pointed at me from across the room, and yelled, “Oh my god, I want your tan!”

Unfortunately, I know it’s not the first, nor is it the last, time I will hear someone say this about my skin color. I get hit with the seemingly harmless compliments that I “look so tan and exotic,” and that I “look like an island girl.” I've also experienced cringeworthy moments when people have put their arm up against mine and compared our skin colors.

When people make these seemingly friendly compliments, they strip me of my Indian identity because they make me feel as though I am not Indian at all.

While I’m sure the intention is to compliment, the reality is, it has the opposite effect. What people don’t realize is that when they tell me they want my tan, I hear that my skin color is something attainable with help from cosmetics. It feels like they're saying I don’t look like my ethnicities. It makes me feel as though my lighter shade of brown is an acceptable one — that a white person would be "OK" with having my pigment.

When people make these statements, they strip me of my Indian identity because they make me feel as though I am not Indian at all. And by pointing that out to me, it makes me feel as though my identity and background is being erased.

Additionally, these comments hurt because people never seem to recognize that what they are saying is racially insensitive. And if I call them out on it, they immediately get defensive, and I come off as the person making assumptions about their intentions. It’s unfortunate because I'm the one dealing with their bias, yet I'm afraid of disrespecting them.

I didn’t grow up with much of my Indian heritage, and I’ve only ever been to India twice in my life. The reality is that I had a very American upbringing. And it was the lack of a cultural upbringing mixed with the constant interrogations from strangers and friends about my “unique” skin color that caused me to struggle with my identity. Yet, as I grow older, I look more and more like my father and his mother — with my strong, dark eyebrows, short stature, brown eyes, long, dark hair, wide hips, and round belly. The more I look at photos of my grandmother in particular, the more I see the resemblance and know that, despite not growing up with the culture, I am still and will always be Indian.

I feel more connected to my Indian culture when my skin is darker, but I am never less of myself when it is lighter. Maybe my skin color doesn't always fit the description of what an Indian woman looks like in the minds of some. But it is my racial identity, as someone who has the blood and genetic makeup of an Indian father. I am always a brown woman, because I am and will always be a biracial Indian American woman.