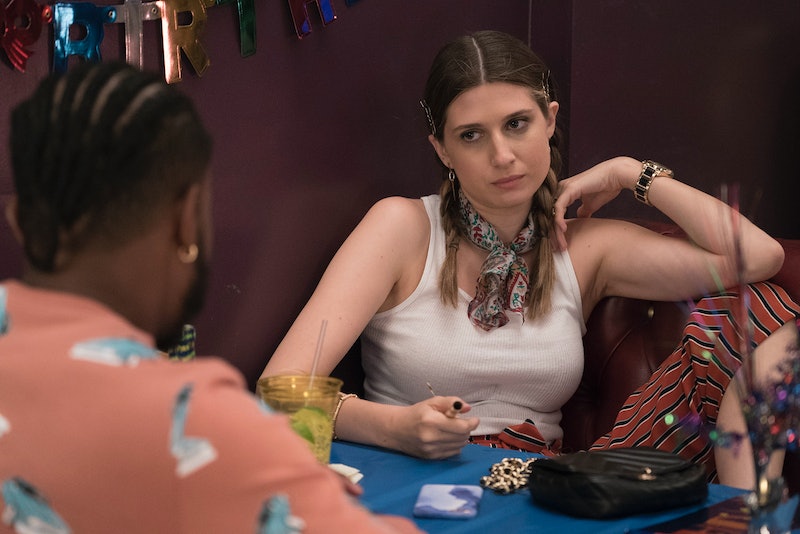 Freeform's grown-ish (executive producer: Julie Bean) has done a effective job of illustrating very real social issues with a millennial/Gen-Z spin. And the Jan. 24 episode doesn't disappoint in that department either. But this time it's not Zoey's (Yara Shahidi) antics that brings a crucial issue to the forefront. Instead it's her friend Nomi (Emily Arlook), whose most recent breakup allows grown-ish to shed light on the double standards bisexual men encounter every day.

A full 2 percent of men identified themselves as bisexual on a 2016 survey from the Centers for Disease Control, meaning that there are at least three million bisexual men in the United States alone. And while it's true that attitudes towards LGBTQ+ individuals have been shifting for the better over all, there's no denying that there's still plenty of work to be done particularly as perception pertains to bisexual men.

Statistics like this show that — much like Nomi does right now on grown-ish (consulting producer: Jenifer Rice-Genzuk) — many women believe that while women fall somewhere on the line of a wide spectrum of sexuality, men are either gay or straight. Nomi admits to her ex-bae Dave (Barrett Carnahan) that she's a hypocrite for breaking up with him because she can't accept that he's bi, but also argues that she can't help how she feels. While Dave might appreciate her honesty, he's obviously not amused and swiftly exits the conversation and the room.

But Nomi isn't the only one who subscribes to this notion that men can only exist on one end or the other of the sexuality spectrum. A brief conversation at Vivek's super-empty birthday party reveals that Aaron (Trevor Jackson) might be "woke" when it comes to cultural issues, but is less open-minded with matters of sexuality. Speaking to Nomi, Aaron declares that no straight man would ever even think about touching a penis, and for a second it seems as if Nomi will have a change of heart about how she treated Dave when she drops a little knowledge on how the sexuality spectrum works.

Like Aaron, men can be just as hypocritical as women when it comes to labels and sexuality, and often dish out misguided arguments that a man who is bisexual is really just lying to himself and or is trying to process that he is homosexual. The prevalence of this misconception is made abundantly clear in a 2013 University of Pittsburgh study that found that men who identify themselves as heterosexual are three times more likely to categorize bisexuality as "not a legitimate sexual orientation."

It's clear that straight men and women sometimes subscribe to the notion that men are bisexual, but in addition to being a woman, Nomi is bisexual too. So, what gives?

Unfortunately, bisexual men and women experience discrimination within the LGBTQ+ community too. One study conducted by researchers at the University of Massachusetts surveyed 745 bisexual people about their experiences of discrimination in various social contexts and found that the biphobia the respondents experienced from gay men and lesbians was not equal to — but still disturbingly comparable to — what they experienced from straight people. This sort of discrimination from all sides leads to bisexual people being more likely to abuse alcohol and having some of the worst mental health outcomes in the LGBTQ+ community. If that doesn't signal that a change needs to be made, then I don't know what does.

In the end things might not have ended well between Nomi and Dave on grown-ish, but maybe this incident will inspire her — and everyone else in the real world who subscribes to these biases towards bisexual men — to open their minds a bit.