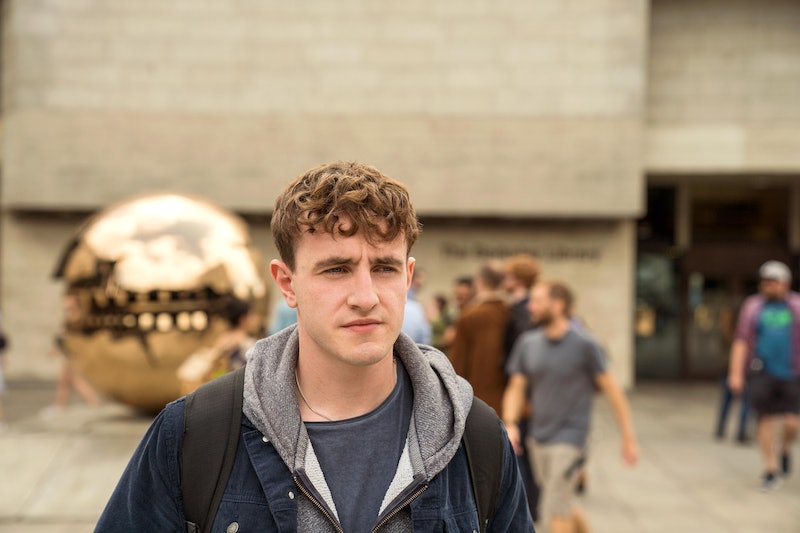 Whether or not you've streamed Hulu's new series Normal People, you should prepare to fall in love with the show's star Paul Mescal once you hear him singing Lady Gaga's "Always Remember Us This Way." The Irish newcomer is wowing viewers with his performance as popular teen and struggling young adult Connell in Hulu's adaptation of Sally Rooney's acclaimed novel. But a deep dive into his Instagram reveals he's a man of many talents.

Prior to being cast in Normal People, Mescal hadn't appeared in a single TV series or movie. Instead, he was focusing on stage roles when he head the news that the hunt for someone to play Connell was on. Like his character, he's also a soccer player — although, he had to give it up in drama school to avoid losing out on parts due to injury, as he told GQ in a recent interview. The one thing he doesn't seem to mention in his interviews is that he also has a beautiful singing voice.

In addition to belting out Lady Gaga's "Always Remember Us This Way," Mescal's Instagram Story highlights include a haunting rendition of "Altar Wine" by David Keenan. There's no denying that the 24-year-old's gorgeous singing voice is every bit as intoxicating as his acting, but part of his appeal is that he spends much of his time on social media being adorably self-effacing. After all, he captioned his Lady Gaga cover, "love "a star is born" a lil snippet from one of my favorite songs in it....excuse the dodgy piano playing." Dodgy piano playing? He's just being modest, as Internet Boyfriends are wont to do.

The many talents of Mescal have certainly caught the attention of Twitter users who can't get enough of the actor. Since the show premiered on Hulu, fans have been declaring their love for the actor all over social media. One fan tweeted in part, "guys you should check out normal people it’s so beautiful and intense and Paul Mescal. Such a lovely story that deals with consent and sex effortlessly and Paul Mescal." Another added, "My type? Oh I’d have to say Paul Mescal."

Meanwhile, Mescal's latest tweet isn't about congratulating himself or even promoting his new show. Instead, he's talking up his sister Nell's new single, because apparently everyone in his family is ridiculously talented. "My sister is the best. That is the tweet," he wrote on Thursday, April 30 alongside a link to her song "Deja Vu." Let the swooning commence (or continue?).

Singing, acting, emotionally destroying viewers with a single smoldering look — Mescal can do it all, and Twitter is definitely here for it.

More like this
Pamela Anderson’s Dating & Marriage History Could Be Its Own TV Series
By Jake Viswanath
Pamela Anderson's Sons Brandon & Dylan Have Their Own Hollywood Careers
By Arya Roshanian
'The Queen’s Gambit' Season 2 Tweet Wasn’t From Anya Taylor-Joy
By Mary Kate McGrath, Jack Irvin and Grace Wehniainen
Claire Foy Spoke Out About 'The Crown's Gender Pay Gap
By Sam Ramsden
Get Even More From Bustle — Sign Up For The Newsletter
From hair trends to relationship advice, our daily newsletter has everything you need to sound like a person who’s on TikTok, even if you aren’t.